For the first time in awhile, the Kansas men’s basketball team was not playing for a league title in the final weekend of the season.

That didn’t stop No. 13 KU from taking care of business with a 78-70 win over Baylor Saturday afternoon at Allen Fieldhouse. With the win in the regular-season finale, the Jayhawks (23-8, 12-6 Big 12) finished undefeated at home with a 17-0 clip in Allen Fieldhouse.

Dedric Lawson led the way with 23 points on 6-of-14 shooting. Devon Dotson and David McCormack finished with 15 points and 12 points, respectively. Baylor was led by Jared Butler, who finished with 31 points on 10-of-21 shooting.

• The game turned when: After a tightly-contest first half, KU created some breathing room with a strong start to the second half.

The Jayhawks scored the first eight points after the intermission to take a 40-29 lead with 17:13 left in the game. McCormack got things going with a hard-earned bucket in the post, while freshman Devon Dotson netted a layup shortly after that. 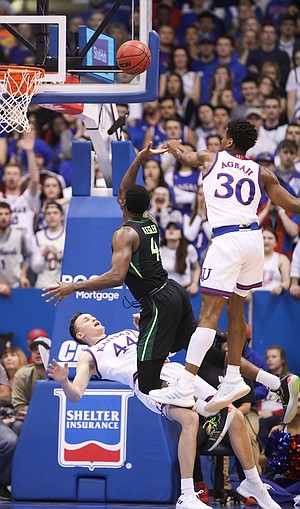 Dedric Lawson, who scored just six points in the first half, then notched a pair of buckets in a 50-second stretch to give the Jayhawks a double-digit advantage. The game was never in doubt after that.

• Offensive highlight: A pair of first-half dunks by Kansas brought a nice roar of approval from the fans in Allen Fieldhouse.

With 18:11 left in the first half, McCormack scored KU’s first points with a ferocious slam. The dunk came off a nifty touch pass from fellow freshman Ochai Agabai, in which McCormack threw the dunk down with authority. McCormack stared down the Baylor defender down, which warranted a warning from the official.

Later in the first half, Agbaji did the honors of notching KU’s second dunk of the afternoon. Freshman Quentin Grimes fired a pass from the perimeter just as Agabji cut backdoor. Agabji completed the sequence off with a slam, giving Kansa a 24-21 advantage at the 6:41 mark.

• Defensive highlight: The key to Kansas claiming a 32-29 lead at the halftime was its efforts at limiting Baylor from long range. 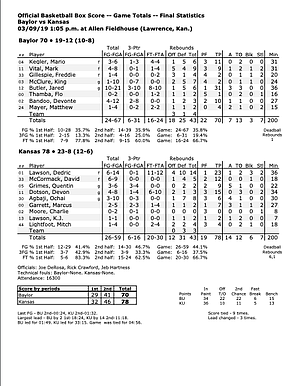 The Bears missed their first nine attempts from long range. Their first 3-pointer didn’t come until the 5:34 mark in the first half. Baylor hit just two triples the entire first half, firing up a total of 15 attempts. For the game, the Bears went 6-for-31 from long range.

It was meaningful given how much success BU has had from 3-point land during the conference action. Entering Saturday, Baylor was shooting as Big-12 leading 38.7 percent from downtown during league games.

•Up next: Kansas will compete in the Big 12 tournament next week.

KU Sports Extra - One More Win at AFH by KUsports.com

Coach Self after KU’s win over Baylor by KUsports.com

Baylor post game after losing to Kansas #kubball by KUsports.com

Okay, I think we've seen enough of David in recent games. He is for real, a more poise in the post. He's more patient under the rim, he fakes, it pays off. He improves his numbers. He seems more ready to receive a pass (Lightfoot can learn, too). He realizes good things will happen. Now, we're ready to piece things together. The key will be Dotson. He has to share the wealth, share the burden of scoring, share the ball, easy passes, create opportunities for others to score. He has to develop court vision in a hurry. He's got to stop drive and pass a desperation pass. That will kill us in the tourney. Other than that, we look good today.

^BTW, I think somebody need to check one of the rims in AFH. Its front cylinder looks chipped. Definitely, it needs to be replaced before somebody gets hurt. ^

Undefeated at home a wins over Villanova and Michigan State.