No one knows that better now than the 15th-ranked Kansas Jayhawks, who dodged a bullet and emerged from Gallagher-Iba Arena on Saturday afternoon with their Big 12 title hopes still intact following a gritty, if not pretty, 72-67 win over Oklahoma State.

There’s not a player or coach on the entire Kansas roster who would have brokered a deal to put the ball in the hands of the Big 12’s best 3-point shooter with the Jayhawks up 3 and their Big 12 title hopes on the line. 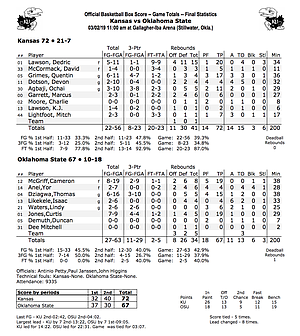 Yet, there the Jayhawks were, with just under 7 seconds to play in Saturday’s third-to-last game of the regular season, when OSU junior Lindy Waters III caught the ball on the wing and found himself Grand Canyon wide open for what would’ve been a game-tying 3-pointer in the final seconds.

Instead of burying the jumper like Waters has done more than half the time this season, the could-be Kansas backbreaker missed hard off the rim to the right and allowed the Jayhawks (22-7 overall, 11-5 Big 12) a chance to ice the game with two free throws from freshman Ochai Agbaji with 4.4 seconds to play.

“I thought we got lucky,” KU coach Bill Self said after the game.

So, how did the best pure shooter in the Big 12 Conference find himself so open to begin with?

According to the Jayhawks, a simple miscommunication between Agbaji and fellow freshman Quentin Grimes put Waters in position to make life miserable for the Jayhawks.

After the game, however, there was no debate between the two Jayhawks about who was at fault. 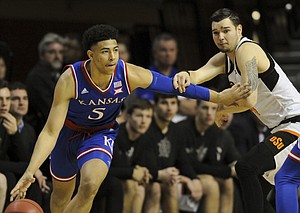 “We got the win. I’ll take the blame,” said a smiling Grimes after scoring 17 points on 6-of-11 shooting to help lead the Jayhawks to victory.

Added a laughing Agbaji — who Grimes said immediately yelled out to him, ‘Why’d you tell me to switch?' — “I was just giving him some trouble about it. But it’s OK. We’ll go over it. He knows that it was his fault. He should take the blame.”

Truth be told, it’s probably the Cowboys (10-19, 3-13) who deserve a little credit for getting Waters open.

“I was coming down the court, I was guarding Waters and Quentin called a switch out, so I went with his man and he went with his man,” Agbaji said. “It was kind of confusion, but it’s a hard action to guard.”

That it was. Both Grimes and Self said the Jayhawks worked on Oklahoma State’s fake ball-screen action throughout the week leading up to Saturday’s victory. But doing it in practice and doing it with the season on the line are two totally different scenarios.

Waters, who missed a good chunk of the second half because of an ankle injury, finished the game with just 6 points on 2-of-6 shooting from 3-point range. But even injured and even on a day where he wasn’t quite as lava-hot as he was three days earlier when he made 7 of 10 from downtown in a near upset of Texas Tech, the Jayhawks knew better than to leave the Oklahoma State sharpshooter all alone.

Added Grimes when asked to share what went through his mind when the ball was in the air: “I was praying he didn’t make it, and I guess God answered me.”

That was not the first time Grimes had things go his way on Saturday. After opening the game with 7 quick points to help stake Kansas to an early 14-8 lead, Grimes saw his confidence grow from there.

The rest of the way, even though he finished with three turnovers and misfired on a couple of shots, everything Grimes did was born from a desire to attack.

His 3-pointer with 2:42 to play — off of a hockey assist from Dedric Lawson and a true assist from Agbaji — tied the game at 67 and his hard drive to the rim a minute later from the corner led to a free throw that put Kansas ahead for good.

“Quentin played great tonight,” KU junior Dedric Lawson, who led the Jayhawks with 20 points and 15 rebounds in 35 minutes. “He started the game out with tremendous confidence and it just carried over. That’s something we need him to do every game.”

Self agreed and said Grimes’ grinder game impacted a lot more than just his shooting and ability to put points on the board.

Fueled by a 13-0, first-half run by the Cowboys that left the Jayhawks staggering, KU trailed 37-32 at halftime and fell behind by as many as 7 points early in the second half and 5 points late.

But the Jayhawks had an answer of some kind for every OSU run — even if they had no answer for junior Cameron McGriff’s 19 points or Curtis Jones’ 7-of-9 shooting off the bench that also netted 19 points — and, so often, Grimes, Agbaji and Lawson were at the heart of them.

“I feel like we grew up today,” Grimes said, noting that his confidence to open Saturday’s victory came from strong play during recent practices by both himself and the team as a whole. “We were down, it was a different kind of atmosphere, the crowd started getting involved and we kept grinding and grinding and hit some tough shots. I think we’re all just coming together as a team right now.”

With two games to play in the regular season, the Jayhawks return to the Sooner State on Tuesday for an 8 p.m. tipoff in Norman, Okla., before closing things out with a home game against Baylor on Saturday.

Great road win. Yes, Waters being that wide open, I thought we were dead. Now we just need a Texas Tech and K-State loss today and it will be one great Saturday.

I fear neither KSU or Tech will cooperate..BUT, if KU doesnt win on tuesday then it wont matter anyway

I don't know. It was a necessary win but barely escaping the worst team in the conference, even with their past history, should be expected.

I simply said to myself, when Waters was w i d e open for a three, you really don't want to do that. I didn't know who missed their coverage, but I knew someone zigged when they should have zagged.

We need someone to be hot every game now. Rock Chalk!

It was Obaji who missed coverage and then was fouled. We were lucky Waters missed.

We were lucky refs didn't call it when Grimes knocked out Anei on loose ball, under 1 min.

What about the out of bounds call on the cowboys with about 40 seconds. Looked like Dedric touched it last.

The copy under the lead photograph has the names reversed. However it is not a problem as we WON. Good to see Grimes attacking the rim today. Good win. Rock Chalk

Other than luck showing up on our side, Grimes showing up was a nice surprise too.

when his 3s falling, we're harder to beat. he's getting better on defense, too. this is a very positive sign.

Let’s get down to Norman folks!!

Who wants to be the first in line to feed me some crow and humble pie? Given our less-than-stellar track record in away games this year, as well as Bill Self's poor record in games played in Stillwater, I had major doubts the Jayhawks would win today, and said as much elsewhere on this site. So, after missing the game because of work, imagine my surprise and relief when I checked my phone and found out that KU had won! So go ahead and jam as much crow down my esophagus as you want!

I had my doubts as well. Seems Bill struggles against his alma mater and we haven't played that well on the road.

The 'Hawks seem to do well when you quit on them. I consider it a blessing, though not as much as when you pack up and head to Iowa City.

Quentin Grimes is a hell of a good passer. When his confidence is going, you can see flashes of why he was a 5⭐️ recruit.

But too bad, only Lawson mostly who's ready for it. Grimes has a knack of sharing the ball - no look and quick passes/lobs, but those guys better be ready to take advantage of those nifty passes. Out of our bigs, only Lawson who benefits the most. This team can be better if they understand each other. If ball is in Grimes' hands, they better be ready; 80-90% he'll drive and pass the ball. Maybe that's an exaggeration..

it's like the chiefs described mahomes. and obviously mitch wasn't expecting that one lightning pass from dedrick.

That's the key, he wasn't ready. It wasn't that fast. Mitch could've grabbed the ball had he got his hands ready all the time. Sure, it would've been nice if it was a bounce pass. But nevertheless, Mitch should've positioned himself toward ball all the time. A very easy trick in keeping one always ready and 100% aware is asking himself "where's the ball? where's the ball?".

Champions find ways to gut out a win...we did not play well...but thanks to Dedric and Mr. Grimes...and the rest of this group of hard working Rock Chalkers....we are still alive...Rock Chalking in Stillwater at 11am...not easy...Great job!.

I thought it was big for Dedric also. This is the type of game he's likely to see the rest of the year. It is well known now that he is deadly if you give him any kind of space, so no one is going to leave him alone. No one else is as consistent. He's likely to only have a few clean looks in any game going forward, so he's got to make some 3's, play through contact, and make his FT's on top of his R's.

That being said, they all seem to be jelling a lot more.

I thought Dedric did a good job of kicking it out when he was double and triple teamed. Better teams might take that option away though, so the other guys really need to be ready to help.

I think this was Grimes' best game. He was more than just a shot maker tonight. He drove, had some great passes, and played pretty good D. I feel like almost every other one of his good games has been mostly because he made a few threes. And something maybe seemingly minor I noticed - when he had a great pass to Lightfoot who got an and 1 in the second half, Grimes actually showed some emotion and let out a yell. I've been waiting to see that from him and am hoping this is the beginning of a Malik Newman type run to the post season

Exactly. He can't continue to play like a timid freshman any longer. We need the fire from him.

It was good to see KU play well down the stretch on the road where that has not always been the case. Last 4 minutes gave up no points, committed no fouls, did not turn over the ball a single time and made 5 of 6 free throws.

Mr. Grimes is officially out of his funk....Q is learning that he can be dangerous inside the 3 pt line as well...by driving and looking to get an easy hoop or assist......Q is one our best players.....loaded with talent....and he has a Stallworthesque...or Kelloggesque ......SWEETNESS to his jumper.......beautiful stroke.

hopefully KU winning a road game in a place where they typically have a hard time winning even when they've had better teams, is sign of good things to come

KU's team, when it won at West Virginia last year, really seemed to make a major leap forward and that, too, was a place that was very hard to win. The quality of competition this year isn't as hard at WV or at OSU as it was last year, but still, we'll take victories where we can find them.