Can Jayhawks hold on to newest batch of commitments?

Kansas football landed eight verbal commitments over the weekend, but it wasn't unprecedented for the program. KU’s 2018 recruiting class skyrocketed as high as No. 2 in Rivals’ team rankings in February of 2017, after a junior day full of visitors resulted in seven highly touted prospects over the span of three days giving their nonbinding verbal pledges to the Jayhawks, at the time coached by David Beaty.

As momentous as this past weekend turned out to be around the Kansas football facilities, with eight new recruits committing from the Class of 2020 — nine if you count Tuesday’s addition of three-star linebacker Taiwan Berryhill — it wasn’t completely extraordinary for the program.

In fact, the boom actually echoed a similarly stunning one that resonated just two years earlier.

KU’s 2018 recruiting class skyrocketed as high as No. 2 in Rivals’ team rankings in February of 2017, after a junior day full of visitors resulted in seven highly touted prospects over the span of three days giving their nonbinding verbal pledges to the Jayhawks, at the time coached by David Beaty.

Of course, once the dust finally settled on the 2018 recruiting classes nationwide close to a year later, KU finished 48th in Rivals’ team rankings, and only two of those seven players — running back Pooka Williams and cornerback Corione Harris — remained on board in a 21-player class for KU.

Receiver Ja’Marr Chase and defensive lineman Nelson Jenkins both ended up at LSU, while receiver Devonta Jason and defensive back Aaron Brule moved on to sign with Mississippi State and on again/off again KU quarterback recruit Clayton Tune ultimately landed at Houston. 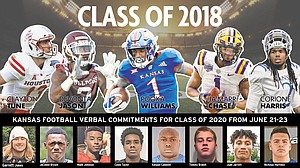 Kansas football landed eight verbal commitments over the weekend, but it wasn't unprecedented for the program. KU’s 2018 recruiting class skyrocketed as high as No. 2 in Rivals’ team rankings in February of 2017, after a junior day full of visitors resulted in seven highly touted prospects over the span of three days giving their nonbinding verbal pledges to the Jayhawks, at the time coached by David Beaty.

So is it realistic to think that KU’s current coaching staff, now led by Les Miles, can keep all nine of its newest recruits, or should fans brace themselves for a number of decommits between now and the winter signing periods?

One potential negative result of having 21 commitments from high school recruits in place in late June is that those prospects can’t sign their National Letters of Intent for another six months. KU currently has more recruits lined up than most programs around the country, and that leaves the door open to coaches from other teams to continue to pursue the players who have verbally committed to KU.

“The buzz is going around about what Kansas was able to do,” Kirby said of the reactions to the Jayhawks’ massive weekend on the ruthless college football recruiting trails. “So you can bet there are going to be other college staffs start going and looking at what Kansas did and some of the kids they got. And this isn’t a secret, but in recruiting when you get a bunch of kids committed in June, you’re going to have to fight. And you’re going to have to hang on to them. That’s just the facts of how recruiting is now.”

Perhaps with a renowned head coach such as Miles in place KU’s present day staff will be able to more easily navigate the commitment waters in the months ahead than the previous staff.

It could also benefit KU that its current batch of recruits are primarily rated as three-star prospects and theoretically not as attractive to poach for more successful programs as the likes of Chase, Jenkins, Jason and Brule, who all ended up in the SEC.

However, assuming KU is better positioned now than a couple years ago to hold on to an influx of recruits could prove to be wishful thinking. Kirby offered some hypothetical scenarios involving a couple of KU’s newest commitments to illustrate how recruiting can be an ongoing battle, even for committed players.

A 6-foot-6 offensive tackle from Anaheim, Calif., Martinez already had an Arizona State offer in place before committing to the Jayhawks.

“So there’s a Pac-12 school close to home. And Kansas was able to already beat them out,” Kirby said. “Well, now you sit here with Nick Martinez and you think over the next three or four months, does UCLA come calling? Does somebody in the Pac-12 come calling that’s closer to home?”

As another speculative example, Kirby mentioned 6-1 cornerback Bryant, from Evergreen, Ala.

“What if Alabama offers Ja’Cobee Bryant?” Kirby asked. “We don’t really know what’s going to happen with recruiting. And that’s kind of what makes it fun to follow and frustrating to follow.”

Monitoring the recruiting scene as closely as he does, Kirby said his rule of thumb is that players who commit early tend to revisit their recruitment in November, once their high school seasons conclude. He also said this trend seems to become more widespread every year.

“I’m sure if you went to the Kansas coaching staff right now and said, ‘Are you going to keep every one of these guys?’ they would look at you and say, ‘If we are, we’re going to have to fight off some people,” Kirby added.

Nothing is guaranteed until a recruit makes his allegiance official by signing a National Letter of Intent.

This past April, a few days after KU’s spring game, the Jayhawks picked up a commitment from three-star Texas prep receiver Keith Miller III. In June, he flipped and committed to Colorado. Miller also had previously committed to and decommitted from Texas Tech, in late 2018.

Only time will tell whether Miles and his staff can successfully retain the eight recruits who pledged this past weekend. Will the excitement of being a part of a buzzworthy summer recruiting weekend endure? Or will it fizzle out by winter — or sooner — for some of those involved?

Miles and his staff will do all they can to keep fighting in those and other unceasing recruiting wars.

• Will Huggins - 3-star TE from Kansas

Regardless of who stays committed and who decides to go elsewhere, I'm confident that this staff won't have as much trouble finding contributors that wind up on the football field. That's one area that I think HCLM will improve on over the course of the next few years. It's one thing to bring in a highly touted transfer or JUCO player but if most of them never become significant contributors, the recruiting rankings mean nothing. There was several high profile players during the Charlie Weis and David Beatty eras that never amounted to a hill of beans on the field. Development and consistency is key for this program. I also hope that they save a scholarship to try to land a "big fish" four star QB to groom. If we can just get an "average" Big 12 talent at that position, we'd win a lot more games. I'm not saying MacVittie won't be that guy (though I have my doubts), but having a stud lined up to take over during his sophomore year would be a fantastic way to help ensure the positive trajectory of this team and provide some much needed continuity at the most important position on the team.

One step further, now that these kids gave a verbal commit, and not even knowing if it's NCAA legal, I would think the thing to do would be to find out where each see themselves with KU and to start right now prepping them for their vision from a distance to come in ready. One thing I am not sure about is how much or what type of communication can occur with a student that has verbally committed and not yet signed or for that matter with a signed student athlete that has not arrived on campus.

But, Fitness and Strength goals, basic techniques to work on, things like that could be communicated without giving away the playbook. I would think it's an opportunity for positive communications with the committed student athlete, to build a stronger relationship, and impress by showing KU's committed interest in them.

Fortunately every school operates under the same disadvantage of trying to hold their signees until signing day. I assume we still recruit key targets even if they give a soft commit to another school just like what is happening with our recruits. I also suspect in the past it has been mighty hard to hold onto their attention when fall gets here and it's obvious that talent isn't being develop and game strategy lacks actual strategy translating into L, W, L, L, L, L, L.... I have hope we solved the last problem. Being competitive and giving the kids a chance to win with good strategy will secure recruits better than anything else.