KU chancellor waiting for news on NCAA investigations like everyone else 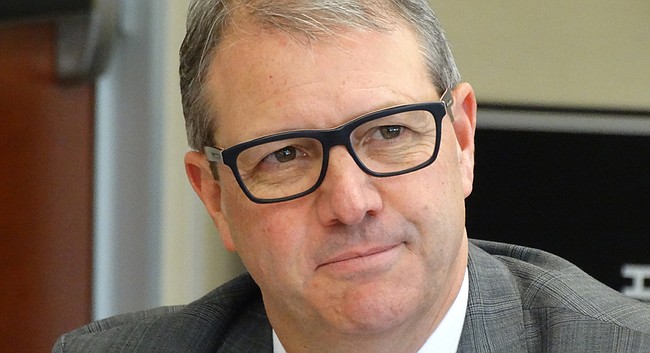 The top official at the University of Kansas, like everyone else, is waiting to see whether the KU athletics program will receive allegations of major recruiting violations.

KU Chancellor Douglas Girod told the Journal-World Wednesday at a Kansas Board of Regents meeting in Topeka that the university had not heard from the NCAA about possibly receiving a notice of allegations — the NCAA’s equivalent of an indictment — from the organization.

But Girod does know the NCAA is "still gathering information” as part of its investigation of the university’s athletics program.

“We’re still in the midst of working with them,” he said. “... We’re hoping they will finish up with us pretty soon, but we have no indication of that."

The NCAA began investigating KU and other programs after an October trial revealed corruption in college basketball recruiting. The trial also spotlighted the relationship between KU men's basketball coach Bill Self and Thomas “T.J.” Gassnola, a former Adidas consultant. Gassnola testified that he paid the families of players to steer them to KU, including $90,000 to the mother of former KU player Billy Preston and $2,500 to the guardian of current KU player Silvio De Sousa.

While De Sousa has already served a seasonlong suspension for the student-athlete side of the scandal, Kansas Athletics could still be facing institutional sanctions.

KU basketball fans began bracing for possible allegations after NCAA official Stan Wilcox recently said the organization would deliver notices of allegations to at least six college basketball programs this summer. The allegations will be for Level 1 violations, which are deemed the most serious and can include penalties such as scholarship reductions and postseason bans.

Although no programs have been named, Wilcox said two “high profile” programs would receive notices of allegations by early July. The other four programs should expect notices by the end of the summer, and the NCAA official said other cases are still in the works.

Girod said he did not know whether any of those programs would be KU.

“We assume we will find out at some point," he said.

Some have criticized Wilcox’s comments for taking the matter to the public when the universities have not been informed of allegations. Girod said he understood the criticism.

“Well, we don’t know who (the universities) are but certainly we would be uncomfortable if (the NCAA is) making comments about ongoing processes because typically they don’t do that,” he said. “Typically they complete their process before they make their comments, and we would expect that.”

What about the NCAA investigating the football program. Did you ask him about that?

How this milquetoast got hired over Neeli is beyond explanation. I'm begging the rich alumni: construct a building, name it after this guy (make it really boring one) and let him retire.

He,s just walking the line till the game is on and then the feathers will fly.

The NCAA has nothing they can prove against Ku and we should not accept simply being used as a scapegoat.

We had that already with Silvio.

If Girod is really that unaware of any allegations from the NCAA and that he feels things are wrapping up and the supposition that other colleges are nearing closing and that is why the NCAA voiced their concern in public. I personally think that is a good sign. I think that the NCAA has done some due diligence at KU and poked around and likely found nothing.

However, if he is just not being upfront with the media and there has been quite a bit of back and forth and submissions, then this could be a shortcoming of Girod that he just is not in tune to the degree of tarnish that is out there.

I'm hoping and from what has come out in public so far, Girod and KU should walk away with relatively no to limited impact from the NCAA.

I still think that sitting Billy Preston once the cash was made known with him never stepping foot on the BB court for a game helps us a lot.