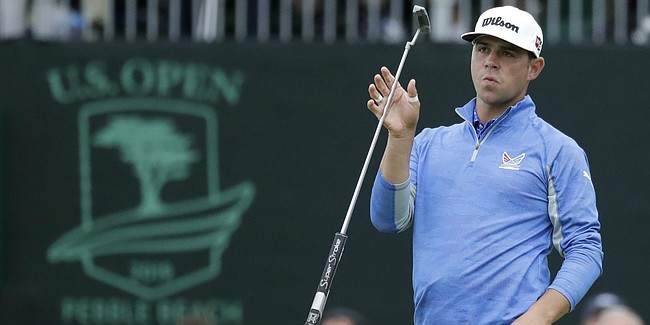 Gary Woodland reacts after missing a putt on the 18th hole during the third round of the U.S. Open golf tournament Saturday, June 15, 2019, in Pebble Beach, Calif. At -11 for the tournament, the former University of Kansas standout is the 54-hole leader at this year's Open.

With some of the biggest names and best golfers in the world looming at the U.S. Open, former University of Kansas golf standout Gary Woodland now sits 18 holes away from winning his first major title.

The 35-year-old Woodland maintained his position as the tournament leader by shooting a 2-under-par 69 on Saturday at famed Pebble Beach. At 11-under for the event, he now sits one shot ahead of England’s Justin Rose (-10) entering the final round.

Rose, who played with Woodland on Saturday and again will be paired with the leader for Sunday’s final round, trimmed Woodland’s lead to a single stroke by firing a 3-under-par 68 on Saturday, which included a birdie on the 18th hole.

“One back gives me the freedom to feel like I’ve got everything to gain, nothing to lose,” Rose said Saturday. “I’m not chasing, really, I’m so close to Gary that I have to go out and play my game tomorrow.” 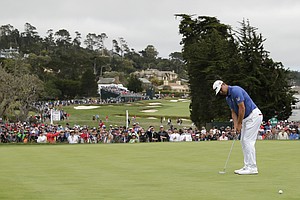 Gary Woodland putts on the third hole during the third round of the U.S. Open Championship golf tournament Saturday, June 15, 2019, in Pebble Beach, Calif.

While Rose represents Woodland’s most immediate threat heading into Sunday, the former Jayhawk is four strokes clear of the next group of contenders, a trio of golfers sitting at 7-under for the Open.

The most noteworthy name in that group is that of 29-year-old Brooks Koepka, the winner of the past two U.S. Opens and the 2018 and 2019 PGA Championships.

Other former major winners still within striking distance of Woodland are Louis Oosthuizen (-7) and Rory McIlroy (-6).

Dustin Johnson and Tiger Woods, two of the more popular picks to win the Open heading into Thursday’s opening round, currently sit at -2 and Even, respectively, and are likely too far back to be a factor at the top on Sunday.

Woodland reached this point by carding just two bogeys in the U.S. Open’s first three rounds, a run that included a stretch of 34 consecutive holes of par or better from the final nine holes of Round 1 through the first seven holes of Round 1.

Woodland twice looked as though he were about to lose two shots or more of his lead until chipping in from 35 feet on the par-3 12th hole, and holing a par putt from just over 40 feet on the par-5 14th.

“I’m excited to be where I’m at right now,” Woodland said.

His second-round 65 tied for the best single-round, Open score ever at Pebble Beach and his week has been marked by a steady performance all over the course.

A three-time winner on the PGA Tour, Woodland, who graduated from KU in 2007 and turned pro the same year, is searching for his first career triumph at one of golf’s four majors.

The Topeka native whose best finish at a major to date was a sixth-place showing at the PGA Championship in 2018, finished tied for 8th at this year’s PGA a month ago and tied for 32nd at The Masters in April.

Woodland, who is vying to become the first former KU golfer to win a major, will begin his final round at 4:30 p.m. Sunday. Complete coverage will be available on FOX and the FoxSports App.

The Associated Press contributed to this report.

Even though the lead over his nearest challenger (Rose) has narrowed, with only 18 holes remaining, his probability of winning the tournament may have increased a little compared to what it was with 36 holes to go.

For what it's worth, I get the impression that there are a lot of golf fans outside of Kansas who are pulling for Gary, and not just because he's the American in the final pairing. He won a lot of hearts by the way he handled that one-hole exhibition with Amy, the young lady golfer with Down Syndrome a few months ago. For anyone who hasn't seen the video, here it is: https://www.youtube.com/watch?v=rYSjF...

We're pulling for you, Gary! .

He needs to continue to play bogey free golf, and pick up a few birdies. He pulled some shots out of air to save his bacon on Saturday. You can’t keep playing with fire without getting burned. With that said, I see 3 things that will determine the winner: 1. The US Open is vicious at Pebble Beach. STAY IN THE FAIRWAY. Those that do that have a legitimate shot. 2. There is no doubt that Gary hasn’t been the leader on the final day of a MAJOR. How will his nerves hold out. He looked pretty composed on Saturday, but this is Sunday. 3. He needs (I believe) to come out hot. No bogeys and 1 or 2 birdies through the first 7 holes. That will calm him down. If he can do that, I think he has a shot.