No one outside of the staff and players who spend so much of their time inside the Anderson Family Football Complex know exactly what the Kansas football team’s offense will look like in the first year of the Les Miles era.

It seems a safe assumption, though, that the Jayhawks’ running game will feature heavily in the coach’s plans.

Senior running back Khalil Herbert deduced as much long before he ever saw even a single page out of KU’s new playbook.

“When Les came in, Coach Les, he’s produced a lot of good running backs and they run a lot,” Herbert replied at Big 12 Football Media Days earlier this week, when asked what aspect of the program’s head coaching change excited him. “Offensively, you all are going to be surprised, I think, at what we do. But I’m excited to see it.”

“I can’t speak on it right now,” a smiling Herbert responded, sticking with the confidentiality stance his new head coach has taken regarding KU’s offense since Miles was hired this past November.

It wouldn’t stun many if Herbert and fellow returning experienced running backs sophomore Pooka Williams and junior Dom Williams combine to share prominent roles within the offense, based on their head coach’s recent history. 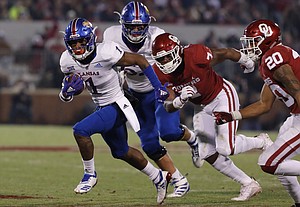 Herbert, the only offensive skill position player KU took to the conference’s summer media showcase in Arlington, Texas, proved more forthcoming when asked how productive the Jayhawks’ running backs could be this coming season.

Pooka Williams will serve a one-game suspension for KU’s Aug. 31 season opener versus Indiana State, following his offseason arrest and domestic battery charge that led to a diversion agreement. But from that point forward, the sophomore from Louisiana should become the focal point of KU’s offense.

That doesn’t necessarily mean, however, that Herbert and Dom Williams will go unutilized as a result. Herbert is confident all three running backs can produce and remain involved.

“Definitely. I think everybody will have their fair share. As a unit, I feel like we’re the best (running back) unit in the nation,” Herbert asserted. “So one guy goes in, one guy goes out. I don’t feel like there’s a dropoff. Dom especially, I feel like he’s going to surprise a lot of people this year. “As a unit I feel really confident in us.”

With Pooka Williams suspended from team activities this from past December through early July, Herbert and Dom Williams took on the vast majority of running back reps throughout spring practices. Herbert hopes all of that work will help both of them level up in terms of their in-game production. 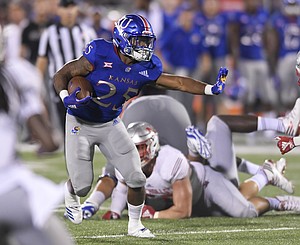 “As a whole we had to come in in better condition,” Herbert recalled of the spring. “But definitely getting those reps, just having to carry the load kind of helped us out with what we’re going to get involved with.”

Elsewhere on the offense, Herbert also provided as much of an update as he could about other skill positions. Asked what he had seen from Thomas MacVittie, Carter Stanley or any other KU quarterback this summer, Herbert didn’t single any player out. He instead spoke of the “leadership” he saw from that position group overall.

“Guys coming in, being vocal, especially when we do seven-on stuff, making sure everybody’s on the same page,” Herbert shared, adding QBs have made a point to lead in workout settings. “I’m excited to see what they do during fall camp.”

While all three of KU’s top rushers from 2018 are back this season, the receiving corps won’t be enjoying similar continuity. Most notably, Kansas lost Steven Sims Jr. and Jeremiah Booker. Between the two seniors, Sims and Booker accounted for 84 receptions, 879 yards and nine touchdowns. Now the bulk of KU’s receivers are far less proven.

Even so, Herbert said the rest of the offense is confident the receivers can be productive.

“I think it just goes to stepping up. Guys stepping up and making plays,” Herbert said. “We’ve got Steph (junior Stephon Robinson) in the room coming back. We’ve got some new guys, Ezra (Naylor) and Andrew Parchment (both junior college transfers). And we’ve seen them make plays during spring and during practice, so I feel like when it comes time for game time they’ll surprise a lot of people.”

With 28 catches for 330 yards and a touchdown in 2018, Robinson is KU’s leading returning receiver, followed by senior Daylon Charlot and junior Kwamie Lassiter II, who both made 12 catches a year ago.

It’s fine to be confident but seems like the sort of thing to keep private. Hopefully it ends up being true because it will mean we have had a monster season.

There was a JC transfer a few years ago (probably over a decade) that commented on a goal and got ripped for it. Crawford?

Jocques Crawford. Ran for close to 2000 yards in junior college and thought he was going to duplicate that feat at the D1 level. Came close, only missed it by about 1700 yards.

Never had an issue with Jacques. Nothing wrong with believing in yourself or setting high goals.

Would you dipsh*ts be happier if he came out and said: we aren’t very good, we’ll probably in 2 or 3 games, we don’t have a lot of talent? These poor kids got duped by a scam artist who proved himself to be the worst football coach in the history of football, running an inane offense, with plays called by a doofus who had four OC’s in four years.

It’s good to see that the new staff is getting these kids to believe in their talents, their work ethics and their abilities. Uphill climbs aren’t made by doubters.

Jocques played for Mangino and was suspended for multiple violations of team rules and not because his 232 rushing yards fell short of his stated goal to rush for 2000. That said, if I ever met him I’d shake his hand and thank him for suiting up for KU.

Brett, although I agree with your thinking I don't like the name calling. Please save that for our opponents. If I want that I'll go to the political board.

I think we could indeed have the best backfield in the country but much depends on the guys up front, the overall schemes, the game plan. There's much that goes into having a great run game. I hope we have it all and a complete, competent offense.

We have what should be a very good backfield which doesn't necessarily mean we'll have a good running game. And to your point, the o-line will dictate much of our success but rushing yards will be limited if opponents don’t respect our passing game. As much as I like Carter I don’t think he poses the type of passing threat that defenses fear and the jury is still out on MacVittie.

BM - It doesn’t have to be either extreme, and no problem with being confident. Being confident doesn’t require a public statement. The BB is kinda the perfect example.

Some might even say that making such a public statement is providing bulletin board material for every DL we face this year. Sometimes it can be better to fly under the radar.

Well said, Dirk. There's a huge difference between being confident and saying we have the best backfield in the country.

Would love to see a wishbone set of plays! Burned out on the 3 and out in 90 seconds.

The wishbone brings back great memories but who runs it anymore besides the military academies? Got to have a good mobile qb like Montel Cozart for it to work.

Georgia Tech and a few smaller schools. But you have a good point.