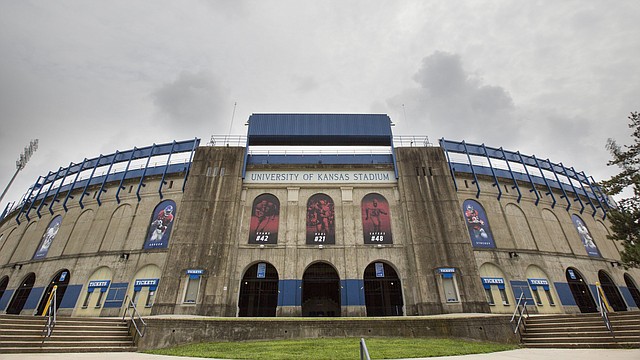 With the introduction of widely available alcoholic beverages, Kansas Athletics also will no longer allow fans to re-enter the stadium once they leave it. So the days of ticket holders retreating to their tailgate spots for a halftime round before heading back in for the second half are through.

Beer and wine sales will conclude at the end of the third quarter.

“Fans have told us that one of the best ways to enhance their experience at Kansas Athletics events is for them to have the ability to enjoy beer and wine,” Long stated in a release, “and we are pleased to provide this opportunity.”

Reached by the Journal-World to gauge whether this move might indicate a similar one is soon coming to Allen Fieldhouse for KU men’s basketball games, Long indicated through a spokesperson that no such decision has been reached.

“The fan experience in Allen Fieldhouse is the best in the country,” Long said. “Beer and wine will continue to be available in selected private spaces in the fieldhouse, but we haven’t yet made a determination about expanding that to the concession stands.”

For many years, alcohol has been permitted in suites at the stadium, and more recently beer and wine became available to fans in premium-seating areas, such as KU’s Touchdown Club, behind the south end zone.

In the buildup to this decision, for the past two years KU also tested out beer and wine sales at concession stands at home baseball, softball and soccer games.

“That program has been very successful,” Long said, “and with the support and collaboration of on-campus entities, we are now prepared to expand it.”

With the new policy, KU becomes the sixth Big 12 school to make beer and wine available for purchase on football game days. The others are Oklahoma, Oklahoma State, West Virginia, Texas and Texas Tech.

“Our research,” Long said, “and that of others indicates that not only does alcohol availability promote attendance and improve the game-day experience for fans, it has the potential to reduce alcohol-related incidents in and around the venue.”

The alcohol sales at David Booth Kansas Memorial Stadium will be managed by Centerplate, Kansas Athletics’ concessionaire. Long said KU will collaborate with the company to serve alcohol responsibly and “to provide a safe environment while providing a superior customer experience.” Long added that those who sell the beverages will be required to take training on intervention procedures.