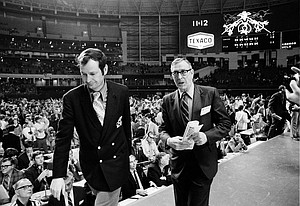 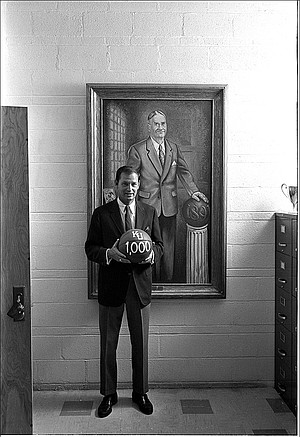 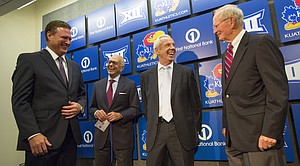 As Bill Self says, " Coach Owens is a good dude". I can fully attest to that.

Back in the 60s, he and his wife, another dear friend [Smokey Joe Ensley} and his wife and me and my wife used to go out after every home game to an after hours joint and review the game and dance away the tension built up over the game. The song "Bully Wooly" comes to mind by Sam the Sham and the Pharaohs.

It was a very special time for me in that I could get all of the "inside" strategy and thinking behind so many on and off the court decisions. Knowledge of personal traits and habits of each player was also a part of the conversation and how Ted would have to work with each one separately to build character, individual and team play.

It just didn't get any better for a die hard, passionate Jayhawk basketball fan since the crib.

Happy Birthday Coach Owens! Proud to have been a Jayhawk during your tenure.

Happy Birthday Coach Ted Owens and thanks for the memories ! From a kid stuck to the radio back then.

I still remember as a student watching games behind Ted as he was coaching. He was/is a great dude indeed.

I had the privilege of spending a little time around Coach Owens in the early 70”s. He is one of my all-time favorite people, just a class act, a true gentleman. Charming, charismatic, and kind to everyone he met. Thank you for so many great memories of my time at KU. Happy Birthday, Coach, and best wishes for many more!!

I have always felt that Coach Owens belongs in the Hall of Fame. Hope they present him with that honor in the near future.

A great guy, but only slightly above average as a recruiter and coach figuring out how to win.

Nowhere near a HOF coach. I was at KU during the shi *end of his career. Still was a nice guy.

Everything I've ever read and heard about Coach Owens talks about what a great guy he is. While I never met him in person (other than the few lucky times I stood in line to get seats behind the bench), I apologize for the "Gong Owens" t-shirt I had in the late 70s.