It’s been known for quite some time that the Kansas men’s basketball team was headed back to paradise this season. But now the Jayhawks know who they will be playing when they get there.

The full bracket for the 2019 Maui Jim Maui Invitational tournament was released on Thursday and it features the Jayhawks squaring off with host school Chaminade at 8 p.m. (central) in the opening round on Nov. 25. 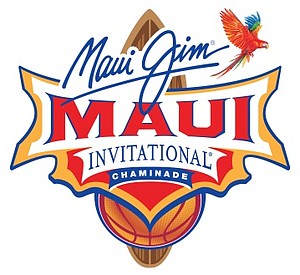 The Kansas men's basketball team is back in the Maui Invitational for a record-tying seventh time in 2019.

The winner of that matchup will face the winner of the UCLA-BYU game a day later and the two losers will head to the consolation bracket.

Those four teams are on the opposite side of the bracket as Michigan State, Virginia Tech, Dayton and Georgia, setting up the potential for KU and Michigan State to meet in the title game on Nov. 27.

“It’s another great year for the Maui Jim Maui Invitational, with several teams expected to have big seasons ahead of them,” tourney chairman David Odom said in a news release. “This field features a spread of young and experienced talent, both from the players and the coaches. We’re looking forward to seeing who will take home the Wayne Duke Championship Trophy in the unbeatable atmosphere that is the Lahaina Civic Center this November.”

KU leads the all-time series with Chaminade, 3-0, (all three matchups came in the Maui Invitational) and will move into a tie with Arizona and North Carolina for the most Maui Invitational appearances (7) by a non-host program.

The eight teams in this year’s Maui Invitational have a combined 196 NCAA Tournament berths, 44 Final Four appearances and 16 national championships.

In addition, those eight programs have won the Maui Invitational a combined five times, with KU owning two titles, the most recent of which came in 2015.

This year’s field features three coaches with Final Four experience (Bill Self, Michigan State’s Tom Izzo and Georgia’s Tom Crean), two coaches with national titles (Self and Izzo) and one program (Georgia) playing in the event for the first time in school history.

Hear ye Hear ye If Georgia wins the both games do they have a scrimmage to see which Georgia team advances. Just jokin Virginia Tech plays Michigan State. Correction will be made I bet.

That’s not very nice. We all make mistakes. I don’t appreciate your sarcasm and quite honestly your bullying. The group on this website do a great job informing us of KU athletics. They make a typo error and your ready to pounce on them. Your mean spirit isn’t needed on this post.

Holy crap, what's with all the ads and old articles building up at the bottom? I was barely able to get to the comment section!

Glad to know it's not just me. Thanks Bryce.

AGREED...the Silvio story has been up there for a friggin' month!!!

Regarding the Maui Tourney, anything less than the championship would be major upset. The Hawks should blow this field away......including Izzy's boys!!!!!

It's a good way to have folks NOT come back to your website.

Sorry for the inconvenience, everyone, but it definitely wasn't something done on our end or anything we intended to have happen. The company that provides those ads (which we use to help keep this site free) "upgraded" us to the infinite scroll format without informing us of the change and we're in the process of getting things set back to the way they were. Shouldn't take long. Thanks for your patience and understanding. - Matt

Thanks for the info Matt. I lost my $#!& after about 5 articles with that happening. I get having to HAVE sponsored ads. I don't need 30 per article however. Thanks for the heads up Mr. Journalist!!!