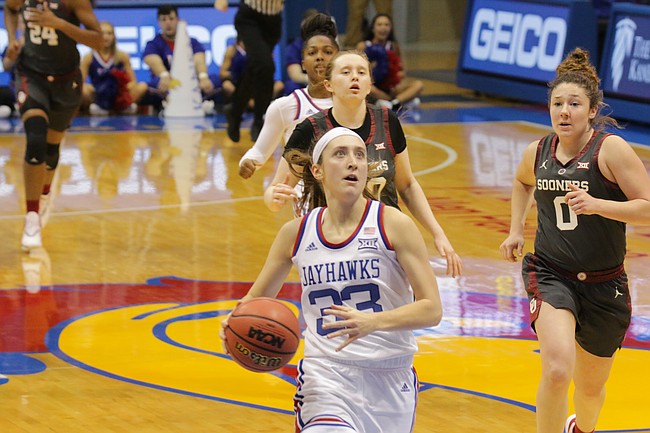 Kansas senior Kylee Kopatich (33) drives to the basket in a game against Oklahoma Wednesday night at Allen Fieldhouse. KU won 88-79.

After hitting a career high of her own, Austin Richardson wanted to give a big hug to teammate Chelsea Lott, who also netted a career high with 10 points.

“(Chelsea) works hard everyday,” Richardson said. “I was so proud of her, she went out there and worked her butt off and didn’t back down from a challenge.”

The last time the Jayhawks had two 20-point scorers was against UC Riverside in 2016, which was in Schneider’s first year with the Jayhawks. KU has not had three such scorers since 1995.

“Sometimes on the defensive end, a person will plug and leave a driver or shooter open,” Lyons said. “This time, they couldn’t leave anyone open because we’re all making the shots.”

In that specific home game against UC Riverside, a 90-84 win, Jessica Washington had 27 points and McKenzie Calvert had 30. Neither of those Jayhawks, who were hypothetically eligible, played. Calvert now plays for Moorhead State after transferring twice, and Washington did not play against Oklahoma with an ankle injury.

“We’ve struggled so much,” Schneider said. “Without having (Washington), we’ve really been searching for a third and – perhaps even fourth – scorer. It’s going to be really important moving forward, and even when we get her back, we’re a different team when we have four players in double figures.”

With a near-perfect day from the free-throw line, Kansas (12-7, 2-6 Big 12) only missed two attempts as a team from the charity stripe.The Jayhawks went 32-of-34, making 94 percent of their attempts on the night. It marked the eighth-highest clip in a single game in program history.

“We needed all of them,” Schneider said. “There were several areas of the game tonight we really demonstrated some mental toughness, stepping up there and making free throws or whatever that comes down to.”

After trailing by three points for most of the first half and surrendering a scoring run to the Sooners, Kansas took its first lead of the game halfway through the third quarter with a 12-0 run, which was highlighted by two fast break 3-pointers from Lyons and De Carvalho.

Lyons hit a bucket to get up 54-53 after a Sooners bucket, but Kansas continued to play like it had the lead, and held on. By the end of the game, there were eight lead changes and four ties.

Kansas entered the game after a winless road trip, where it scored 43 points against Texas and 53 against TCU.

“Our offense has really been anemic lately,” Schneider said. “I don’t think it’s an execution thing, I think we’re running good stuff, getting the right shots by the right people. We just had not made them.”

Talk about a game of runs. Glad that the lady Jayhawks had the final say. Maybe the men could get some pointers about free throw shooting from the ladies. Rock Chalk.

"With a near-perfect day from the free-throw line, Kansas (12-7, 2-6 Big 12) only missed two attempts as a team from the charity stripe. The Jayhawks went 32-of-34, making 94 percent of their attempts on the night. It marked the eighth-highest clip in a single game in program history.

The only Big 12 team that may be worse than us is OU...this was for the bottom of the toilet. A nice bounce off the bottom.

I think there's an old saying, "If you don't have something good to say, don't say anything at all."

Some people have completely flipped that around, and seem to go by the mantra of, "Regardless of whether there are good things or not, find something bad to say. If necessary, be creative and make things up."

And some people don't like to face the cold hard truth....

There is also a very real phenomena call "Object Fixation". It says what you focus on - fix your eyes on, is where you'll go, and what you'll run into. Sort of like a cold hard truth, but fixate away if you'd like, or be part of the solution. Nah, it's easier to throw stones.

KU was one of 3 teams with only one W so far in league play. Their only game so far against the other 2 teams was a narrow road loss. Getting this one and defending the home court was important for moving up to the middle of the pack. Lots of basketball yet to be played.

Gotta appreciate the performance at the FT line. It doesn't matter who you play, making 90% of your FT's is great even just for 1 player, but to have the entire team shooting at better than 90% is phenomenal!

It should really help to get Washington back in the line-up. As the men's team and others have found, it is tough to lose one of your best players.