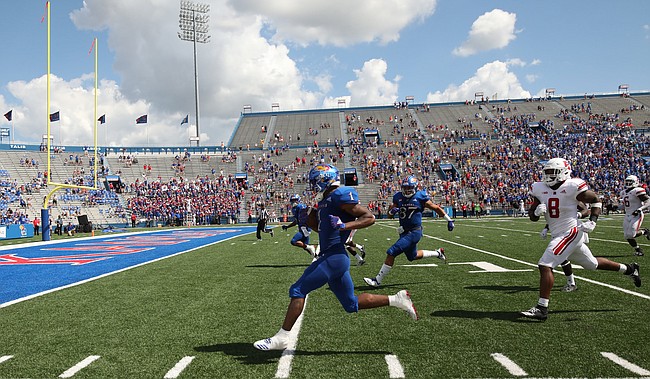 KU sold $3.98 million worth of football tickets during the last season, which saw the Jayhawks go 3-9 and culminated with the firing of head coach David Beaty. That $3.98 million figure is up from $3.41 million in football ticket sales in the 2017 season. The numbers measure only the dollar value of tickets sold, not the actual attendance at games.

KU disclosed the numbers as part of an NCAA required financial report that was filed earlier this week.

The numbers also show that KU football ticket sales continue to trail those of many other Power 5 conference programs. Kansas State University also filed its NCAA report this week, and it shows the Wildcat program sold $12.46 million in football tickets during the 2018 season.

The reports, though, also show how much of a financial juggernaut KU basketball remains. KU sold $15.85 million worth of men’s basketball tickets in 2018. That total is greater than the amount of tickets Kansas State sold for all of its programs — football, basketball, baseball and women’s sports — combined.

The Journal-World sought comment from KU Athletic Director Jeff Long about the latest financial numbers, including expectations he has for football revenue growth following the hiring of former national championship coach Les Miles. The Journal-World has sought an interview with Long since the first week of December, but KU officials have not made him available.

The NCAA report also highlights several other numbers. They include:

KU received $28.75 million in media rights, with the bulk coming from the Big 12 Conference as part of its football television contracts. That’s up from $25.11 million in fiscal year 2017.

The department received $8.3 million in other revenue from the conference, which includes money the Big 12 distributes based on the number of football bowls that conference teams compete in during the season. That revenue was down from $11 million in fiscal year 2017.

Coaching salaries totaled $17.7 million for the year. That’s up about 16 percent from the previous year. For comparison, K-State paid its coaches $15.5 million in 2018.

The amount of athletic student aid — the dollar value of scholarships for tuition, books, room and board — totaled $11.9 million. That is up about 6 percent from 2017.

• The number of students receiving athletic aid totaled 398 in 2018, with 220 female and 178 male student-athletes. That’s down from 429 in 2017. Those figures include student-athletes who are receiving a full-ride and those who are receiving partial scholarships. When the number is converted to a full-time equivalency, KU provided the equivalent of about 250 full-time scholarships in both years.

• KU reported receiving $1.5 million from the university's general operating funds. That’s down from about $1.6 million in 2017. Several faculty and staff members have lobbied for the university to eliminate general fund support for the athletic department as KU is undergoing about $20 million worth of budget cuts on the KU campus. Athletic department leaders, however, have successfully lobbied to keep the funding.

Sounds like maybe KU is using the same tabulating folks who inflated the #'s of criminals coming over the southern border. : )

Why don't you go pitch a tent in the desert just north of the border (where there is no barrier or ICE presence) and camp out a few nights. Then come back and we'll talk...

You wouldn't make it back.

Gotta think there has already been a big jump in sales for next year. We've bought ours and are looking forward to the spring game. Time for football to start pulling its weight.

I'll encourage others as I did two years ago: if you are out-of-town, buy the cheapest season ticket, with the worst seat in the stadium this year. Then frame them - what a great annual tradition. The coaches' corner tickets run less than $200. The tickets themselves are usually really sharp. A great collectible in the first year of Miles. And a good donation to the program. Yes, you could donate directly, but this is more fun and it helps with the public image of the program in a way that a drip-size donation to the Williams fund won't.

Two years ago, we bought an extra seat. I bought a chair back and picked the worst seat in the stadium: far, tall corner up above the scoreboard. We would always use binoculars to see if anyone was hanging out in it - almost always someone had found it. We may do the same this year. Join us!

If you are interested in doing this, and maybe starting a new tradition by creating a chair-backed seating area up in the corner of the stadium - contact me: mccabe.brett@icloud.com. We'll get coordinated and do our small part to try and move the program forward. Let's have some fun!

Also, on a random and unimportant note, I'm hoping we completely revamp the uni's this year. Don't get me wrong - some of them are super sharp. But it would be nice to start somewhere and stand for something. I'd even take the white home jersey's like LSU - or a complete new look, but with a statement. We need to start to build an identity as a program - and the key to that is consistency.

One home. One away. Play ball.

Anyone want to guess the 2019 football ticket sales as either a percentage or raw number over 2018?

Bville, if he goes and camps out look you propose, he may not come back at all. There are some bad dudes out there coming over daily by the thousands.

Thought you were going camping in the desert???

I'm back baby!!! Made a few sand castles while I waited to see the caravan pouring over....as expected, it didn't happen. Came home. Making a snowman now waiting for the KU tipoff. Any other questions Hannity?

There were more people at the Roy Williams "I'm stayin' (not)" party than there were at KU football games last season. The television games always maintained close shots of the announcers so they wouldn't show how embarrassingly empty the stadium was.