Kansas guard Quentin Grimes (5) puts up a three from the corner over Kansas State guard Mike McGuirl (0) during the first half, Monday, Feb. 25, 2019 at Allen Fieldhouse.

Just 48 hours after its worst conference loss under Bill Self, Kansas bounced back in a big way.

The Jayhawks pushed past their in-state rival and Big 12 leader Kansas State for a 64-49 win Monday night in Allen Fieldhouse. The victory did many things for Kansas, as it avoided the season sweep in the Sunflower Showdown and kept from being buried in the league race by K-State and Texas Tech.

KU’s supporting cast was essential in the win, increasing the team’s streak to 33 games in home Big Monday contests. Mitch Lightfoot provided valuable minutes on both ends the floor, while freshman Quentin Grimes amassed 6 points for the first time since Jan. 21.

Grimes, who scored 12 points, was one of three KU players to notch double figures in the latest rivalry clash. Dedric Lawson led the way with 18 points, while Devon Dotson finished with 16 points. Lawson notched his 17th double-double on the season.

• The game turned when: Kansas State senior Dean Wade picked up his second foul with a little over eight minutes remaining in the first half.

K-State coach Bruce Weber rested his two big men, including Wade, after both players picked up their second foul late in the first half. He was forced to be more creative with his lineups, and KU was able to take control of the game.

The Jayhawks outscored the opposition by 9 points over the final eight-plus minutes of the first half, taking a 34-27 advantage at the intermission.

• Offensive highlight: KU’s first point in the second half was a thing of beauty.

After a miss by Kansas State, KU manufactured a basket to gain momentum at the start of the second half. The Jayhawks fed the ball to Dedric Lawson at the high post. K-State, which had been trying to double-team Lawson when he had the ball, showed a glimpse of that for a second. 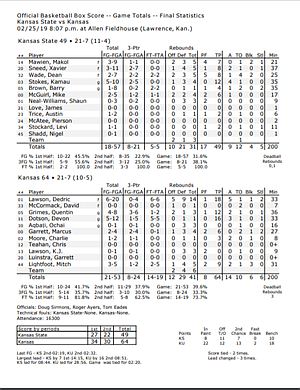 Freshman Devon Dotson got in the open space with a brilliant back-cut, and Lawson hit him stride for the easy layup.

• Defensive highlight: Without question, junior Mitch Lightfoot made the largest impact in the first half.

Lightfoot’s willingness to the dirty work was on full display in the first half, especially on the defensive end. After playing only three minutes during the first half in the blowout loss to Texas Tech, Lightfoot was the first sub to enter the fray in the Sunflower Showdown.

On the defensive end, Lightfoot swatted an attempt near the rim and managed to draw a charge as well. He also hit a 3-pointer on the offensive end, while netting a pair of tough buckets through traffic as well. Lightfoot earned the start in the second half, and was just as gritty over the final 20 minutes.

•Up next: Kansas travels to Oklahoma State at 11 a.m. Saturday.

Grimes had more than 6 points...

That's what the story says. He amassed six points for the first time since Jan. 21, and I said he finished with 12.

I never get tired of beating the kittens.

Neither do I. Tonight, the only thing more satisfying than the win itself with the despondent looks on the faces of the KSU seniors as they sat on the bench in the closing seconds, especially that little punk Barry Brown. They will never know the exhilaration of leaving Allen Fieldhouse with a victory.

Good thing the crazies got their wish and Mac started....those two turnovers were the spark...

Big Mac certainly set the stage for Mitch! The rest was KFC gravy!

mccormacks nickname should be edward scissorhands .

Good win tonight. They played with great effort and really guarded and Lightfoot was awesome. Still left me wanting more on offense, but considering how bad they looked Saturday this was a great bounce back win.

And unlike K-State our crowd didnt rush the floor like they did in Manhatten.

I'd be okay with making an exception against K-State but only if they could do it in a manner in which it is clearly mocking the fans from Manhattan.

The first 5min 1st half was concerning, but thanks to our fans, energy, relentless efforts, even with 0 dunks, we overcame the kittens meow.