It wasn’t long ago that Tony Hull’s future with Kansas football was in limbo.

Les Miles had been hired to take over the program, and while the team’s new big wheel stated publicly that he would assess the viability of retaining some assistant coaches from David Beaty’s final staff at KU, that didn’t mean Miles had to bring anyone back, including Hull, the team’s most effective recruiter for the previous regime.

For that matter, there was nothing stopping Hull from pursuing jobs elsewhere.

“It was probably the most chaotic time of my life,” the Jayhawks’ running backs coach said while recently reflecting on the period of uncertainty during his first media session since Miles announced a week before Christmas that Hull and former defensive coordinator Clint Bowen, now KU’s safeties coach, would return.

Before everything got sorted out, the situation was precarious enough that Hull owed it to himself to look into other coaching opportunities.

Ultimately Miles asked the New Orleans native who had successfully recruited coveted prospects from his hometown such as Mike Lee, Corione Harris and Pooka Williams to stay at KU.

Having spent his first 11 years in coaching working at the high school level in Louisiana, Hull obviously was readily familiar with Miles’ résumé at LSU, a tenure that included a national championship following the 2007 season.

Even so, Hull wanted to discover as much as he could about Miles before reaching a personal decision on the next step of his career.

“I talked to a lot of the guys that played for him at LSU, from the area,” Hull said, “and I want to say all of them had nothing but great things to say about him. So that helped out.” 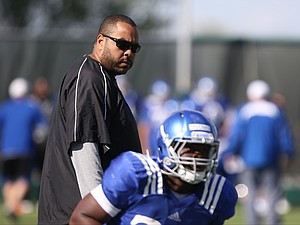 The second component of his conclusion, the Louisiana transplant said, was his new home away from home.

“Lawrence is a special place,” Hull remarked. “The community, the school, the kids that we have here, it’s an extremely special place, and I didn’t want to leave this place at that time.”

The third determinant came down to the program’s success. Despite Hull’s efforts in devising somewhat of a recruiting pipeline from Louisiana to Kansas and his work with the team’s running backs, if he left KU this offseason Hull knew he would be doing so at least somewhat unfulfilled.

“We’ve still got a lot left to do and I believe in what Coach Miles’ vision is, and I want to work for a guy like that,” Hull said, “because he’s done it at the elite level and he knows what it takes to be successful. So it was a great opportunity for me to learn, and also finish the job here.”

Under contract with KU through February of 2020, Hull’s tasks haven’t changed too drastically since Miles took over, even though he no longer holds the associate head coach title that Beaty gave to him.

His new boss, Hull related, wants him to continue on his already established path of professional progress, both as a recruiter and a position coach. 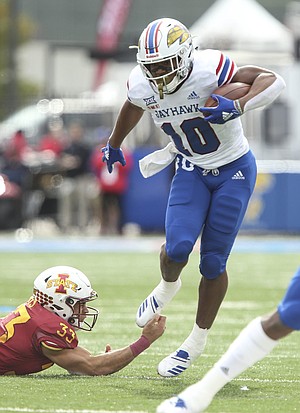 “I believe we had a really, really good year, not just with Pooka, but with Khalil and Dom,” Hull said. “And the yards per carry that they had was some of the best in the country with the limited touches they had.”

While Pooka Williams’ exact future status with KU football remains unclear at this point, as the running back’s next court date dealing with his domestic battery charge is set for June 3, Hull’s plan is to get the most out of the team’s running backs in his first season working for Miles.

After spending a couple of months around KU’s new coach, Hull likes the program’s direction.

“Everybody’s on board. That’s been a number one thing when talking to recruits,” Hull related of conversations he has had with prospects and their parents.

The running backs coach said everyone involved with the team believes in Miles’ plan.

“That’s a good culture to have,” Hull said.

I can't believe I am this excited about our football team and it's only February! I don't expect miracles, I do expect noticeable progress, and I think over the next 3 years that's what we'll see... progress each season.

I've been watching KU football for 50 years. I'm in perennial wait and see mode. I haven't been hyped for a season since Mangino.

All signs are pointing toward improvement, but I'm tempering my expectations for the upcoming season. I would hate to see another 2 win season, but I wouldn't be surprised. That being said, I'm hoping Miles' experience and football acumen will translate into 4 or 5 wins this season. Really glad he retained Tony Hull. The running game should be a bright spot.

Anticipation could not be higher. We have had two very successful regimes in the last 30 years. Mason and Mangino. Neither of them brought the resume of Les Miles. Now does that mean we will do better than the 12-1 season of '07? Of course not, but I do believe we will have better year to year success. Even in the years of MM and Mason we were up and down winning years and losing years forge ahead and then take a step back. I believe we will have a more consistent trend with this Coach. Can't wait.

I am optimistic that we can develop our talent, get better at some basics, win the games we should. That alone will be a noticeable improvement.

Hoping now that Tony can up his game in recruiting. Glad he likes the community. If we can get Pooka back and we make him into a heisman candidate maybe we can get back to that no. 25 class ranking.

It's a kind of a triple whammy.

First, we get rid of Beaty because he was a lousy game day coach not to mention he adjusted poorly to the talent he had at his disposal, and KU had one of the worst teams in all of college football for the past 7 years much to the chagrin of those that care. It was hard not to like that move.
Second, despite what most think, to Beaty's credit, IMO he did inherit one of the worst scholarship situations ever as well as probably the worst college football program at that time yet by his final year IMO the one thing he did do was to correct the scholarship issue for the next coach. Everyone was freaking out we couldn't have a decent recruiting class and that our roster was destroyed again. Not even close to true. As everyone now see's our coaching staff put together a pretty good crop.
Third, we hire Miles, a coach that has won it all once before, and who is smart enough to keep the two best coaches from a recruiting and public relations standpoint all while hiring the best coaching staff we've probably ever had. And, the coaching staff are all keeping an open mind to build a system based upon the talent we currently have on the roster and not force square pegs into round holes. Hard to believe we are hearing such common sense that most fans blog for.
So what's not to love??? So far everything being said and done has been spot on!! Not a single down played and it's very hard not to get over excited!

Why do people insist on stating fiction as fact? Multiple sources inside the program and outside of the program have proven that Beaty left us almost exactly where he started in terms of scholarships. It's not debatable. You aren't allowed to have an opinion. It's numbers and math and Keegan - thank goodness - detailed it in great, accurate and specific detail. And its been confirmed by several people inside the department.

No one would keep criticizing Beaty if commenters on this site would simply stop telling lies.

And, in one paragraph, you seem to give Beaty some of the credit for the miraculous recruiting job Miles did. Repeat after me: Zero verbal commitments.

One of the top 10 things I'll enjoy this year is, hopefully, the end of the Beaty apologist posts. He was terrible in virtually every aspect of his job. There is not silver lining. He trashed the roster. He ran the wrong offense. He lost games he should have won. He couldn't keep coaches. He extorted millions from Zenger. And now he wants to coach at Texas while we pay him.

Please, for the love of all that is Crimson and Blue, just friggin' stop.

Looking back on KU Jayhawks football past Head Coaching era's, there have been some pretty good football staff's prior to the hiring of Coach Miles. Coach Mason assembled pretty good staff members (based on what those former assistant coaches have went on to do post Mason Era. Not a knock at all against Coach Miles staff (because, I'm excited with the staff that Coach Miles has assembled as well). But, Coach Mason had some really good assistant coaches as well.

Thought it was because he and Bowen had a year left and it was cheaper to keep? Lol

Lb. Tron Folsom go for him!