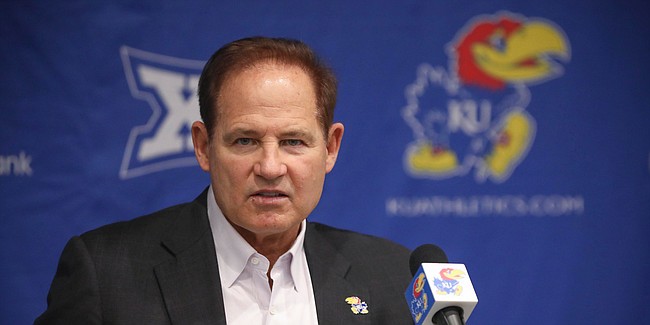 When Les Miles was introduced as the next Kansas football coach back in mid-November, a fairly significant portion of the story of his hiring was about a big name coach with a national championship ring returning to the college sidelines for the first time since being fired by LSU in 2016.

That November night, Miles repeatedly referenced being “back in” and spoke with great appreciation and anticipation about his next opportunity to coach the game he loves and what that meant to him and his family.

It only would make sense then for Miles, at his first signing day press conference as a Jayhawk on Wednesday afternoon, to hoot and holler, rock and chalk, roar and riot about the juice and adrenaline he felt while visiting prospects, gaining commitments and ultimately signing players in his first recruiting class at Kansas.

But he never did.

It seems Miles has moved on to the next step on his back-to-college-football agenda. Rather quickly, too.

He no longer is focusing on his part in this story — one he and countless others hope will be a rags-to-riches journey that leads to KU landing elite talent and competing for championships — and instead is all-in on building a winner.

Heck, he even used those very words — “this class will have the ability to compete for championships” — when introducing his first signing class, which included 19 players from 11 different states, 10 on defense, 8 on offense and 1 special teams player, 14 high school prospects and 5 from the junior college ranks.

But Miles never talked about himself.

His assistant coaches did. Many of them shared their version of the story of Miles being dubbed “The Closer” on the recruiting trail. And there’s little doubt that this program is being rebuilt in Miles’ image. But Miles appears to have reached the point where he’d rather keep building than continue talking. The reason?

“I’ve got to be honest with you,” Miles began. “It’s really about Kansas. It’s a special place. It’s a place where you can get revved up because the people that you serve are great people. That family environment is very obvious. I’m fired up, but I want to bring a quality athlete to a place that’s going to take care of them. This is that place.”

From the players he coaches to the coaches he has hired and the administrators he reports to, the importance of quality relationships runs deep with Miles.

In a short time, he already appears to have built some of those here in Lawrence while really taking to his initiation into the Jayhawk family.

Throughout time, hundreds, if not thousands, of coaches, at all levels of football, have emphasized the importance of creating a family atmosphere in their programs, so much so that the gesture often has bordered on being cheesy.

However, when Miles referenced it, it seemed to be more of a validation of the job he had taken than a cheap catch phrase designed to appease the success-starved Kansas fan base.

From Turner Gill to Charlie Weis and Charlie Weis to David Beaty, the past decade of Kansas football has been a disaster. But at least in the eyes of the 19 players that Miles persuaded to join the Jayhawks, those disastrous days, woeful records and forgettable seasons did not do any long term damage to KU’s — and now Miles’ — hope of getting Kansas back on the winning track.

The next step was landing the right recruits. Though off to a better start than many expected, that process will be never-ending and ultimately will determine whether Miles succeeds at Kansas.

There still is a ton of work to be done, and the process of bringing KU football back to respectability will not be easy nor take place in a single offseason.

But in a short amount of time, Miles appears to have gotten a pretty good grip on his new reality, the challenges that exist and what it’s going to take to turn things around.

“The Kansas brand helped us tremendously.” Miles said Wednesday. “It stands for academics. It stands for great athletics. It’s just tremendous for us. … It’s a place with a lot to offer and I think we sold that great.”

"From Turner Gill to Charlie Weis and Charlie Weis to David Beaty, the past decade of Kansas football has been a disaster."

It's been such a long time coming. I'm so happy to have a coach that is so clear-eyed and knows what he is doing. Still pinching myself months later.

Can't wait for September to come around.

Matt Tait, I really enjoyed this article but would like to say in my opinion "The first step" was actually hiring Jeff Long...

I too thought that and I'm sure glad we did! I think Miles is gonna have us to a bowl game by 2020 I truly do! I'm not saying it will be on New Years Day but 6-6 or 7-5 is a definite possibility. I won't be surprised to see him win more games this season than any season since 2009 either.

I might go back one step further and acknowledging hiring a chancellor who understands the value of a revenue-generating football program to the bottom line of an academic institute.

I agree great article Matt. I'm actually excited for the first time in a long time for KU Football! I think we will compete this year and Miles will have us in every game. We won't be out-coached and we won't be under-prepared. I know to temper my enthusiasm some but we will win a few games and I bet we surprise a couple teams.

Matt, I think you hit on the most obvious thing we will see in Coach. He will not dominate the headlines with inciteful or insightful comments as some Coaches love to do. What he will do is work at the job of acquiring and then developing talent. Let everyone else do the talking and let my coaching do my talking seems to be his mantra. How refreshing.

Seems like a very good class given the time to work with and the number of blue shirts eating into our allotment of 25 signings.

Matt, I can't remember who asked the question during the press conference but I found Miles' response regarding the importance of Bowen and Hull in the recruiting process to be extremely guarded. I don't believe he mention that either of them were directly involved in the recruitment of the current class. They are obviously the holdovers from the past coaching staff and it will be interesting how they contribute to Miles' program in the future.

I didn't see a single Louisiana recruit if I'm not mistaken. Maybe Hull just didn't land any for this class.

thought I'd offer an alternate view of the recruiting rankings (per rivals). This is the data that is normally sorted by the total number of points accumulated for all the players in the class. (Team, Total # Recruits, Avg * Rating, Total Points). I calculated the 4th column = Total Points / Total # Players = Avg points per player, and then resorted based on the 4th column. (sorry about my formatting failures).

The classes seem to me to fall into 4 groups, though I could see some arguing there are only the have and have nots. It will be interesting to see what each staffs can do with player development, and similarly which staffs found hidden gems..

How did you calculate Total Points?