Kansas guard Devon Dotson (11) moves to the bucket past Kansas State forward Xavier Sneed (20) during the first half, Tuesday, Feb. 5, 2019 at Bramlage Coliseum.

Manhattan — Kansas coach Bill Self has never been one to tell his players how to handle the league race.

Sure, he wants them to pay attention to scouting reports and game plans and the concept of focusing on what they can control. But when it comes to off nights in their dorm rooms or study sessions with their laptops, Self doesn’t really mind if the Jayhawks focus their attention on the league standings or do a bit of scoreboard-watching.

“I don’t tell them much of anything,” Self said before the Jayhawks’ 74-67 loss to Kansas State on Tuesday at Bramlage Coliseum. “But I have mentioned certain things. And I’ve told them it’s too early to worry about this stuff. But the guys should be well aware that K-State (was) a game up on us, along with Baylor, in the loss column. They should be aware of that.”

It would be hard for them not to be. Everywhere the Jayhawks look, talk of extending their NCAA-record Big 12 title streak to a straight 15 runs rampant, with KU fans tracking the Big 12 race from the opening game to the end and media coverage of yet another KU push increasing with every week.

But just because each passing game brings KU and the rest of the conference one step closer to crowning a champion — or co-champion as occasionally has been the case — that doesn’t mean Self puts greater emphasis on games played later in the season. 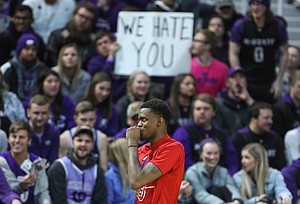 Regardless of where they stand now or what the circumstances will be three weeks from now, the Jayhawks, particularly the first-year guys, are enjoying the heck out of this year’s Big 12 race.

As for whether he ever had experienced anything like this, dating back to AAU events or his days at College Park High in The Woodlands, Texas, Grimes grinned as if to say, “Are you serious?”

“No,” he said. “Not like this, where every team is good every night and anybody could beat anybody if they’re just hot or on a good run, good stretch.”

Tuesday’s game featured one of the most lopsided experience edges of any game the Jayhawks have encountered this season.

For one, the Jayhawks, as they have been for the past 9 games, were without junior starter Udoka Azubuike. And, for two, the Wildcats are one of the country’s most experienced teams, returning nearly everybody from last year’s Elite Eight team that lost to Loyola-Chicago in the NCAA Tournament.

In fact, the Wildcats entered Tuesday second in the nation in minutes continuity, which tracks returning minutes from players who actually played a season ago. KU’s rank? 285th.

“I think that’s, obviously, an advantage for them,” Self said ahead of Tuesday’s battle. “But I think this time of year, so many of those things are a little bit overrated.”

The first 22 games of Grimes’ Kansas basketball career have been a self-described adventure of “ups and downs.”

While averaging just over 25 minutes per game and starting all 22 contests, Grimes has produced 7 double-figure scoring games, 5 games of 3 points or fewer and 10 games where his final point total landed somewhere in between. 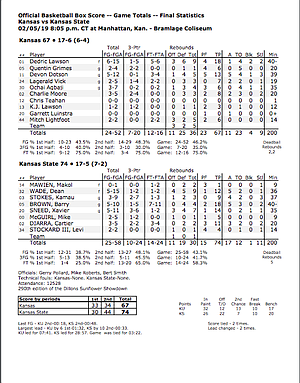 Before experiencing his first taste of Tuesday’s Sunflower Showdown, Grimes talked openly about his rookie season and the challenges he has encountered.

“It’s definitely been a struggle, for sure,” the former 5-star prospect and one-time projected lottery pick said. “But there’s always been those couple games where I almost broke out and have shown what I can do.”

Despite the rocky road and inconsistency that, to this point, has defined him as a college player, Grimes said his head has remained in a solid place.

As for any ideas why the 6-foot-5, 210-pound guard has had to endure those ups and downs and episodes of inconsistency, Grimes had a theory on that, too.

Grimes finished with 6 points and 5 turnovers in 20 minutes during Tuesday’s showdown with the Wildcats.

Tuesday’s loss dropped KU to 17-6 overall and 6-4 in conference play for the first time since the 1993-94 season ... Kansas is now 1-6 this season in true road games and 5-6 in games played away from Allen Fieldhouse ... The loss snapped an 8-game winning streak against the Wildcats and dropped KU’s record inside Bramlage Coliseum to 26-5 all-time. KU now leads the all-time series with K-State 196-94 ... Former Colorado great and one-time Kansas recruit Chauncey Billups, as well as former NBA coach Stan Van Gundy, were on the call for ESPN during Tuesday’s game. Van Gundy coached KU assistant Fred Quartlebaum at Fordham back in the 1980s.

It seems pretty clear that KU will not win the Big 12 Conference this season.

I'm afraid you may be right. We may have just witnessed the beginning of the end of our long-cherished streak. A streak which looked like it might survive even a nuclear holocaust might have suffered a blow from which there may be no coming back from.

Oh, how the mighty have fallen. We've gone from a team that was #1 in the country and won the NIT Season Tip-Off to a team that might not even win our own conference, let alone get to Minneapolis in April. A combination of recruiting failures, eligibility issues with key players, lack of player development, and untimely injuries will be the causes of the end of the streak.

I wonder if Bruce Weber will be as quick to rip Barry Brown's game-ending dunk as a "[Richard] move" the way Bill Self did in 2016 after Brannen Greene's game-ending dunk. Seriously, that dunk by Brown at the end, even though it didn't count, was one of the all-time low-class unsportsmanlike moves by a KU opponent EVER. Brown just earned himself a place in infamy alongside the following:

Barry Brown is a lowlife punk, and I am already thirsting for revenge on KSU at the end of the month.

Does it appear that Vick (maybe the best 3 shooter on the team) has been criticized and isn't aggressive and simply plays not to make mistakes. Abd gets the jerk and some others that make mistakes are not criticized as much. Would he benefit from a set up screen play to drain the treys? Seems to me the best shooters should be shooting.

tNow we have had a great run, even if they try to take it away from us. Now this year is pivotal, It may come to an end this year, and we have to accept that, but next year could be even worse, if this bunch does not rally as a team. On paper we look very good, and as pieces we are not bad, but we lack team cohesion, offensive understanding of where each player needs the ball, a toughness to make the best basketball play. How many times did we see Frank Mason simply refuse to not make the best basketball play possible, You might block his shot, but you were going to have to or foul him. Think of how many times when the game was on the line at KState, that one of our players desperate sought to jack up a shot. It takes guts and toughness to do the right thing in a game. Vick simply does not have it. Even Lawson at times forces a play, Dotson is incredible, but he is not good at breaking down a defense, which Frank and Devonte were masters of. We are losing on the road, because we do not insist on making the right play. We do not play good smart team basketball. It is not a physical issue really, but a mental one. We need a good shrink.