If the “Free De Sousa” chants from the student section and the raucous roar from the Allen Fieldhouse crowd when he took the floor and later was shown on the video board were not enough of an indication that the Jayhawks are still fighting for ineligible forward Silvio De Sousa, Kansas coach Bill Self’s comments after the game had to be.

“It ain’t over,” Self said of the saga that had played out for months and finally came to a resolution on Friday.

That’s when the NCAA ruled De Sousa ineligible for the rest of the 2018-19 season and all of 2019-20 for his guardian’s alleged role in accepting $2,500 and making arrangements for more in a pay-for-play scandal that recently rocked college basketball.

The facts today are the same as they were when people arrived at Allen Fieldhouse for Saturday’s 79-63 Kansas victory over Texas Tech. De Sousa is ineligible. KU isn’t happy. And the future is uncertain. 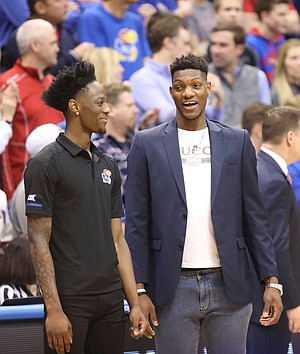 While there, however, KU officials provided a little more clarity about what comes next, both before and after the game.

Speaking to reporters during an impromptu news conference 15 minutes before tipoff, Kansas Athletic Director Jeff Long again expressed his outrage over the NCAA’s ruling and then explained a little more about how things got there.

According to Long, who said De Sousa was not officially ruled ineligible by KU until Jan. 13, the process took 3 months.

“As they looked into potential NCAA violations regarding Silvio, we provided them with every witness, every document, every communication that they requested,” Long said. “We kept pressing them for an answer, so Silvio could get back on the court, even if it meant serving a penalty first.”

That moment never came. Instead, two months into the probe, Long said NCAA officials informed KU that they would consider reinstatement if KU did two things. The first was standard and required KU ruling De Sousa ineligible and formally requesting reinstatement. KU did that in mid-January. The second involved the NCAA mandating that KU “had to identify (former Adidas rep) T.J. Gassnola as an agent and as a booster, only as a hypothetical, for the purposes for reinstatement.”

Asked if he gained any clarity as to what was meant by hypothetical, Long said, “We understood that the declaration for reinstatement purposes only was so they could move through the reinstatement process.”

Asked if KU considered not classifying Gassnola as an agent and a booster, Long said, “We considered many, many things through the process and, in the end, we felt that that was the best approach to take based on the information we had.”

Asked if KU considered declaring De Sousa ineligible before Jan. 13, Long said, “There’s been a number of times through the process where we considered that, but it wasn’t until Jan. 13 that we thought we had a path forward that could result in his eventual reinstatement.”

KU is appealing the ruling, but Long said the NCAA has not given KU any sort of timeline for a ruling on the appeal. He added that the NCAA has given KU “a commitment from them that they will move along as quickly as possible,” however. It wouldn't be a matter of days, he said, but he hoped the process would happen “quickly.” 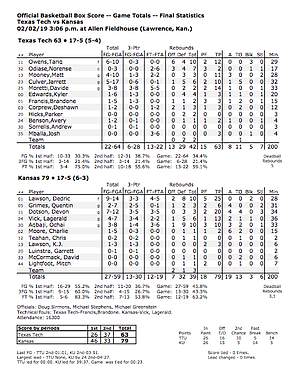 For now, De Sousa will remain at KU, where, according to Long, he will continue to receive all of his scholarship benefits, practice with the team and even travel to away games through the request of waivers obtained by Kansas.

Long said he remained “confident in Silvio’s innocence in this” and added that De Sousa “did not benefit from the alleged violation and he had no knowledge.”

And therein lies the biggest issue that Self has in this whole deal. Of course, Self wants De Sousa to play. And there’s little doubt that his 6-foot-9, 245-pound frame that was so key in helping Kansas reach the Final Four a year ago would help this season’s team immensely.

But beyond that, Self appears to be focusing his efforts toward what De Sousa needs.

“I do feel that our university will do whatever they humanly can to create a situation to put our best foot forward in trying to get (De Sousa’s) penalty reduced. Without question. I know that Jeff (Long) and the chancellor (Doug Girod) are totally on board with fighting for him. Not that you wouldn’t fight for every student-athlete. I get that. You should. But this one, to us, is a little bit different and even more special because of the way he’s handled everything so far.”

Because of that, and because of KU’s hope that De Sousa might still suit up some day, Self said nobody was operating with the mindset that this is now a thing of the past.

“I don’t think that it’s time for us to move on,” Self said. “I don’t think we go into this planning on having him. We prepare like we don’t, and if we can ever get him, it would be a bonus. But I do think, regardless of the situation, we have to and should and want to fight and advocate for him, because to think that his college basketball career is over (is hard). To me, if you knew that something was not right, are you ever going to accept it? So, to me, no matter what happens, based on what was reported yesterday, you’re never going to stop fighting, because it’s just not right.”

KU “had to identify (former Adidas rep) T.J. Gassnola as an agent and as a booster, only as a hypothetical, for the purposes for reinstatement.”

The NCAA must have learned that proecutorial tactic from the FBI as that seems to be one of their favorite tactics. Sidney Powell wrote a book titled 'Licensed to Lie' where the FBI did exactly that to prosecute Merrill Lynch from the Enron Task Force. The FBI applied that hypothetical to apply to a 'made up law' to get convictions. After hundreds of millions of dollars spent by the government, the SCOTUS reversed the Arthur Anderson convection 9-0....after 85,000 people lost their jobs and investors lost billions of dollars. 10 of the 12 counts on the Merrill execs have been reversed. Those 4 execs had to serve a year in maximum security prison before be proven innocent. Many of those same prosecutors are now part of the Mueller Team, notably Andrew Weissmann.

It sounds like KU ran into exactly the same thing with the NCAA where prosecutors will pursue any and all means, ethics be damned, to get a scalp...the bigger the better.

People who engage in illegal and unethical activities don't just give themselves up willingly. The tactics used by the FBI are the same ones used by police forces all over the country.

Don't make this out to be something way bigger than it is.

It's always a big deal when ethics are compromised regardless if it's local police, the NCAA, FBI.....

Comparing Arthur Anderson & Enron to Adidas & KU is hardly and apples to apples comparison but it should be noted Arthur Anderson employees destroyed documents related to Enron when they discovered they were going to be investigated by the SEC. So they are not exactly choir boys are they?

If they used similar “unethical” tactics to take down a crime boss or drug lord would you be equally appalled?

Both are DOJ/FBI driven cases in which the criminal bases are fictitious crimes. The Andersen and Merrill cases were riddled with prosecutorial misconduct. The comments by Long when he references KU's discussion with the NCAA echo those in the charges of Merrill's Jim Brown (19:02 https://www.youtube.com/watch?v=1V16m...).

No matter how you look at it, that request by the NCAA only serves their prosecutorial intent and is not good for KU. Basically they were screwing with us and suckered us into that move by sort of promising reinstatement.

total BS. The punishment does not fit the crime. Time served (held out) would have been appropriate. At worst suspended for this current year. But to add all of next year on top is draconian.

Probably no one here remembers KU basketball player Vernon Vanoy who Pepper Rodgers convinced to play football. Not only did be become a ferocious pass rusher at KU but he had a career in the NFL. If memory serves me, the KU football roster is lacking talent. I really do think Les Miles might benefit from pursuing Silvio and maybe the NCAA will allow his participation.

I think the kid has already been punished enough

Since what the NCAA has done to DeSousa and KU is criminal, I recommend that Silvio just gives them a well-deserved middle finger and goes pro. And instead of appealing the NCAA decision, KU should sue the NCAA, not only on how they conducted (actually not conducted) their so-called investigation and used unethical tactics, but how they also treated Billy Preston and KU last year.

The NCAA is a disgrace. It's time for college athletics to deep-six the NCAA and replace it with an ethical and upstanding organization that looks out for athletes and their members.

There was a time when the NCAA was an ethical and upstanding organization. If you replace it with something else, that "something else" will itself become corrupt and tied up in layers of bureaucracy sooner or later.

Dang the NCAA has put us on double secret probation. I say this is an indictment of the whole college basketball system ! https://youtu.be/ROxvT8KKdFw

Sounds like a set up to me having KU declare the Adidas rep a agent or booster. I'm really surprised KU agreed to do that.

Naming Adidas rep a 'hypothetical' booster will cost us dearly. Don't punish the student, punish KU, bar us from post season and the 14/15th title if you must, yet let the kid play., when a recruit's family takes money or a car from an agent or shoe company and then lies to us about it, that is a horse of different color. This case seems different, wonder what statement it would make to forfeit the season and play him. call it crazy. KU stands for the kids and fairness.

Lemme get this straight... You've just had a player on your roster been ruled ineligible for the next two seasons for receiving prohibited cash payments. And you allow said player to sit on your bench during a CBS televised game wearing a Gucci T Shirt and at least one Gucci pendants? Maybe next time leave the $500 T-Shirt and $1,500 necklace at home for the club...

What's your point? He could have driven up in a new Porshe. Why do you care so much what he wears?

I'd say 85% of us never thought Silvio would ever play again in a Kansas uniform so why the surprise and time to admit that beating this dead horse is an act of futility.