It was the type of play that tends to happen when a team is rolling.

Late in the third quarter, senior forward Mariane De Carvalho had arguably the play of the year for the Kansas women’s basketball team. She flipped a no-look pass in transition, hitting junior forward Tina Stephens in stride. Stephens finished off the sequence with a layup, bringing the KU faithful to their feet in Allen Fieldhouse on Monday night.

The dime by De Carvalho capped a 12-0 run by Kansas during its 83-64 win over Wofford in the nonconference finale.

“That was a hell of a pass; it was a pretty good example for her feel of the game,” KU head coach Brandon Schneider said. “In our game, we don’t have the dunks and alley-oops, the things that can change the momentum and energize the crowd. It is (plays) like that that are important.”

De Carvalho said that it was the best play of her Kansas career, though it was many years in the making. De Carvalho, who is from Araraquara, Brazil, recorded no-look passes at Highland Community College and started perfecting her craft well before that.

“I grew up a fan of Steve Nash; I would watch his videos like all day,” De Carvalho said. “I think I was inspired by him honestly. I just saw (Stephens) when I ran, and I was just praying to please get there. If it didn’t get there, it wasn’t going to work.”

With the win, the Jayhawks finished off nonconference play with an 11-0 record ahead of Big 12 play. It marks the program’s first undefeated run through the nonconference portion of its schedule since the 2005-06 season.

Kansas led the opposition for all but 51 seconds, but the team’s unblemished record was in jeopardy in the third period. After Kansas led by as many as 17 points in the second quarter, Wofford pulled within 4 at the intermission. 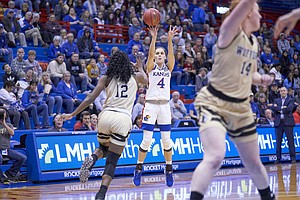 The Terriers (6-8) trimmed the deficit to 3 points on a triple at the 8:02 mark. And that’s when the Jayhawks responded with a decisive stretch, which started with a triple by freshman guard Holly Kersgieter on a kick-out pass by De Carvalho.

“We have had games where we go to the locker room and we don’t have the momentum,” De Carvalho said. “We have good experience to work hard in the third quarter and stretch the lead.”

Sophomore guard Brooklyn Mitchell then darted through the Wofford defense on the next possession, drawing the foul and ultimately completing the and-one. She roared in approval, while giving Kansas a 48-39 advantage.

Shortly after, Kersgieter cut through the lane and De Carvalho hit her in stride. Kersgieter netted the bucket but missed the ensuing free throw on the and-one opportunity. KU managed to collect the miss, and De Carvalho scored off the assist by junior center Bailey Helgren.

De Carvalho then punctuated KU’s 12-0 run in style. Kersgieter launched a cross-court pass to De Carvalho, who was on the right elbow. With her back facing the basket, De Carvalho flung a pass over her head without looking right after catching the initial pass. 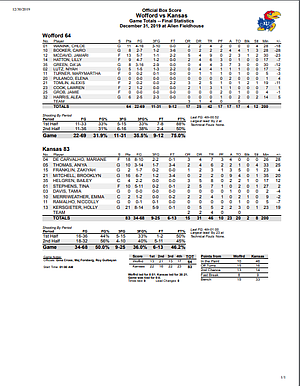 Stephens caught the pass on the left block and netted the layup in one smooth motion. Fans in attendance rose to their feet in celebration. At the next timeout, KU officials played the highlight on repeat on the Jumbotron. And the game was never really in doubt after that.

“It was pretty cool, especially since we had a good crowd today,” De Carvalho said. “(It was a play) to make them happy, and maybe they will come back more.”

De Carvalho, who finished with 18 points and four assists, was one of five players to score in double figures for the Jayhawks in the win. Kersgieter led the way with 21 points on 8-of-14 shooting, including 5-for-9 from beyond the arc.

Mitchell scored 16 points to go along with nine assists. Stephens and sophomore guard Aniya Thomas each finished with 10 points for KU.

“For this particular group, it was just about playing well,” Schneider said. “You have a four- or five-day break for Christmas and limited practice time coming back. We had some good moments. We also had some moments that we can definitely learn from.”

Kansas will travel to Oklahoma State at 2 p.m. Saturday for the start of Big 12 play.