Kansas guard Christian Braun (2) comes in for a breakaway jam late in the second half, Saturday, Dec. 14, 2019 at Sprint Center in Kansas City, Mo.

There’s little doubt that Kansas freshman Christian Braun was energized by playing in front of his family in his hometown on Saturday during KU’s 98-57 victory over Kansas City at Sprint Center.

“Did you hear them,” Braun joked after the win.

With around 20 friends and family members there to cheer him on, Braun delivered one of his best games as a Jayhawk to date.

Four points on 2-of-4 shooting. Seven rebounds, including four on the offensive glass. Three assists, two blocks and one steal. All while playing a season-high 21 minutes. 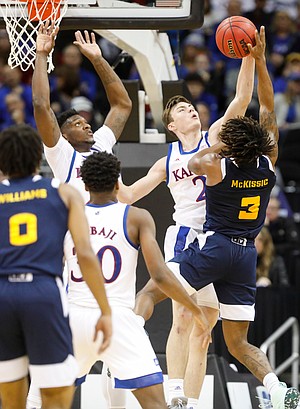 “I felt better today,” said Braun after the game, dishing another assist to leading scorer David McCormack, who dropped a career-high 28 points in the win. “I was kind of feeding off his energy and the rest of the team’s energy. We did a good job of just playing hard today.”

Braun previously held season-highs of four rebounds and one assist, and the two blocks were the first two of his KU career.

Saturday also marked just the fourth time in 10 games that he reached double digits in minutes played. And his intensity and effort — along with the lopsided score — had a lot to do with his extended minutes.

Nowhere was that effort — or the roar from the section of Braun supporters — more obvious or fruitful for Braun than late in the game, when he delivered a two-handed breakaway slam that proved to be the day’s final highlight.

The dunk was the result of Braun being in the right place at the right time, which was where he put himself all evening.

“I got a couple loose balls today, got more rebounds, so it just felt good being out there and everything was flowing better for me,” he said. “I didn’t hit shots, but it happens.”

It does. And it has a lot for Braun this season, who entered Saturday shooting just 36% this season. So even though he scored just 4 points, knocking in 50% of his shots was a welcomed sight.

But the offensive output was secondary to the plays that both Braun and KU coach Bill Self see as the freshman’s primary role on this team — tracking down loose balls, stealing extra possessions and bringing bounce and energy to the floor.

“It’s kind of my job on the team,” Braun said. “Everybody has their own role, and I think I do a good job getting loose balls. So that’s one thing I’ve got to do every game, and I’ve got to be more consistent with it. I do a good job in practice, but that’s something that’s got to translate over.”

One of the reasons Braun did that so well on Saturday was Self’s pregame emphasis for the 6-foot-6 freshman.

“I thought Christian was good off the bench,” Self said. “I thought his activity level was much better. … When he’s in there with the second group, he’s usually the second guy to get back (on defense when a shot goes up). His brain isn’t conditioned to go (to the offensive glass) whenever he’s not, and tonight we told him to try to go every time and create as many possessions as we can. He was better at that.”

So were the Jayhawks as a whole.

The second-ranked Jayhawks (9-1) are off this week for finals and will return to action at 11 a.m. Saturday against 20th-ranked Villanova in Philadelphia.

Ohio State just lost. I'm callin it now: we will be number 1 tomorrow and we will hold it all season. We are trending in the right direction with almost every player, maybe SDS and Enaruna excluded. Those two will figure it out and bounce back also. RCJH

How much are you willing to wager on that?

Sorry, it's a nice thought but it's not going to happen. We'll drop at least 3 games in conference and being #1, losing, and still being #1 almost never happens.

We were going to be #1 regardless of what tOSU did but the odds of finishing the season there are crazy crazy small. There will be at least one more loss this season and we’ll drop at least one spot as a result.

More importantly though is the continued development of Braun, Enaruna, ...

We will be lucky to pick up a W in Philadelphia on Saturday.

Kansas is NOT Delaware. Delaware and Villanova made the same number of baskets except 'Nova made one additional three (a one point advantage). It was in made free throws that 'Nova won the game.

Kansas will not be out rebounded as Delaware was, and has a size advantage as well as a "Devon Dotson" advantage.

It could be a close game, but if the KU players play to their abilities they will win.

I have us beating Nova, but Baylor, Tech, and WV will be tough outs especially when playing away from home. I agree with Shannon - at least 3 conference losses - with their associated ranking drops.