1. Play call to your strengths

First-year KU head coach Les Miles spent much of his time during interviews this past month persistently talking up the Jayhawks’ offensive line.

Even though the group’s position coach, Luke Meadows, plans on rotating players in and out up front, Miles thinks the O-line can be an asset for Kansas this season.

Especially if the Jayhawks lack a definitive starting quarterback, they should run the ball behind their capable O-linemen.

What’s more, entering the season, the receiving group is unproven. Meanwhile, even without star running back Pooka Williams (suspended one game for his offseason arrest and domestic battery charge), the Jayhawks have two capable rushers in senior Khalil Herbert (4.4 yards per carry in 2018) and junior Dom Williams (4.2 yards per carry last year). The coaches and player like the potential of true freshman running back Velton Gardner, too.

Opponents rushed for 197.6 yards per game against Indiana State in 2018. As KU’s O-linemen have prepared for the Sycamores’ four-man front and linebackers who flow to the ball, they’re feeling confident entering the opener.

“We’ve been going over it for two weeks,” redshirt junior Lopeti said. “It’s pretty easy. It should be a walk in the park on Saturday.”

2. Rely on your veteran secondary

As ISU went 7-4 in 2018 and won its final five games of the season, its offense (coordinated at the time by Jeff Hecklinski, now KU’s tight ends coach) wasn’t flashy, but it was productive.

A lot of that credit goes to quarterback Ryan Boyle, who was named the Missouri Valley Conference’s Newcomer of the Year, after passing for 1,672 yard and 12 touchdowns in the final 10 games of the season. Boyle completed 62.4% of his 205 pass attempts and threw only three interceptions while passing for 12 touchdowns.

Although ISU lost its leading rusher from last year, Ja’Quan Keys, Boyle proved to be an effective rusher, too, averaging 5.4 yards per carry and running for six touchdowns.

Boyle, now a senior, has his favorite target from a year ago, receiver Dante Hendrix, who led the team with 47 receptions, 681 yards receiving and four touchdowns, back as well.

With the ISU QB looking like the offense’s primary weapon, that should allow new KU defensive coordinator D.J. Eliot to ease into the season by leaning on his many experienced playmakers in the secondary.

Maybe Miles, offensive coordinator Les Koenning and the KU coaching staff have not only settled on who will start the season opener at quarterback but also have determined that player is the man for the job all season long.

However, if they’re truly undecided on the matter and plan on rotating QBs until one separates himself as the clear No. 1 option, it’s best for this offense’s continuity and ceiling that either Thomas MacVittie or Carter Stanley steps up and becomes the obvious choice immediately.

An offense with two quarterbacks involves regular in-game adjustments of some sorts for the rest of the personnel. Getting everything to operate smoothly while also going back and forth between quarterbacks is tricky.

The best case scenario for the offense is that either MacVittie or Stanley serves as the starter and the play-calling sets up the as of yet unannounced No. 1 QB to be successful and gain some confidence.

Big 12 play isn’t far away; neither is a Week 3 trip to Boston College. And a program known the past decade for its offensive issues needs as much momentum as possible before the schedule starts becoming more difficult. 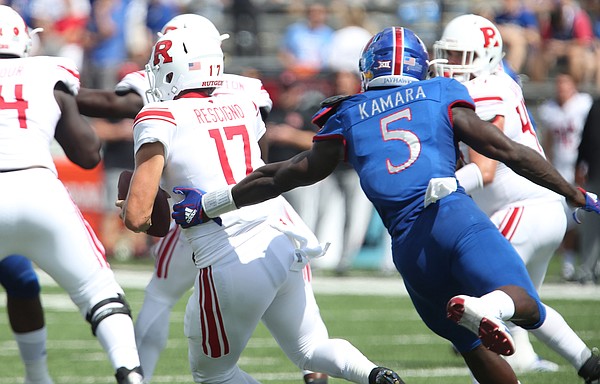 Kansas defensive end Azur Kamara (5) tries to get a hand on Rutgers quarterback Giovanni Rescigno (17) during the third quarter on Saturday, Sept. 15, 2018 at Memorial Stadium. by Nick Krug

Any time he’s been asked about the defense’s relatively inexperienced linemen and linebackers over the past month, Miles has been quick to shoot down concerns with public praise.

Everyone will soon get to see how the group, which only features two players (inside linebacker Kyron Johnson and “Jack” Azur Kamara) with starting experience, fares against a veteran ISU offensive line.

If the visitors’ veteran blockers can keep KU’s linemen, pass rushers and linebackers at bay, ISU could have a chance of delivering the program its first win over an FBS foe since defeating Western Kentucky in 2011.

Conversely, if a handful of new starters from KU’s front live up to their head coach’s billing, the Jayhawks’ defense should be able to survive.

The veteran players who have been a part of this program the past few years are tired of losing. They seem invigorated by the presence of Miles, a head coach who has a national championship ring that he sports on his right hand from time to time.

Miles and his staff appear to have emboldened the Jayhawks heading into this season, and upperclassmen such as senior running back Herbert understand the team must capitalize on that now.

The players also look like they enjoy playing for Miles, so that could add extra bounce to their steps for the always anticipated season opener.

As for Miles, although his career record is 142-55 thanks to successful runs at Oklahoma State and LSU, he hasn’t coached in a game since LSU fired him following a loss at Auburn on Sept. 24, 2016.

KU’s head coach doesn’t expect to be overwhelmed by emotions in his return to the sideline.

“I’ve done this before. So there will be some recall, but I'll enjoy it,” Miles said. “I think it's an honor.”

Really looking forward to the game.

I hope Adagio Lopeti's comment of "it should be a walk in the park" has been dealt with. Any time players think that something is going to be really easy is the time that they get surprised....and badly. Play every game like it is the championship game, fellas. Don't take anything for granted.

Agreed Matt. To take it a step further....why would a reporter post it for bulletin board material. I’m sure there were enough other quotes to choose from. Don’t get me wrong, blame belongs with the one who said it, but we can take steps to help minimize the damage

Sorry, Steven, but it's absolutely ridiculous to criticizer a reporter in any way for simply printing such an inflammatory quote. A quote like that will ALWAYS get printed, and it should.

And Matt said it best -- no player should ever have that kind of attitude, ESPECIALLY given KU's recent history.

I like the confidence, but I agree with you Matt and Steven. Let's not be stupid.

Can't wait for the game.

As always, I’m excited about the start of football and I want to be optimistic but I can’t help but feel a bit like Charlie Brown about to kick the football Lucy is holding.

Maybe I haven't learned my lesson enough (you'd think after being a KU fan for nearly 40 years, I'd have gotten the message by now, LOL), but I think KU will have a realistic shot at beating BC too and maybe pulling one more surprise in the Big XII. Of course that would get them to six wins and a bowl bid, and at that point hell would promptly freeze over, but hey, who knows? It's like spring training in baseball -- anything is possible (well, except for the Royals, that is, who are back to being, well, the Royals, after a wonderful two-year hiatus -- but I digress).

Benton’s job as reporter is not to represent the team in the most favorable way possible. It is to (fairly) report the story. Fortunately, except for the occasional commenter, we at least appear to be past the days of spinning everything into a negative. Benton, Matt, ... all do a good job of evenly presently the news and even repackaging the news when it isn’t anymore. Hopefully the entire team learns without it being painful.