Les Miles hinted earlier this month the competition for the Kansas football team’s starting quarterback job might last all the way up to the Jayhawks’ season opener.

Five days before making his sideline debut as KU’s head coach, Miles updated the situation Monday morning, saying he doesn’t plan to announce the No. 1 QB before the Jayhawks face Indiana State on Saturday.

It will be either Thomas MacVittie or Carter Stanley taking the first snap of the next era of KU football. Asked during the Big 12’s first coaches teleconference of the season about their battle, Miles said he would “wait until after the game, to be honest” to declare a starter.

“You can certainly go to the game and watch to see how they’re going to be played,” Miles added. “We like our quarterbacks and we’re going to let it play out.” 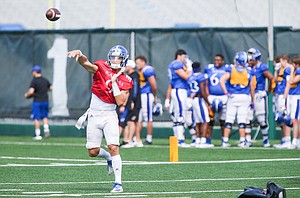 MacVittie and Stanley, who have battled for the job since spring football, and their teammates only had four more practices and a walk through left on their game week schedule when Miles stood firm in committing to neither QB as the starter.

Even if the job is decided by the week’s final practice on Thursday, Miles at this point doesn’t plan to make a public announcement.

“We’re going to take our competition through the back end of the week,” Miles said. “Obviously we’ll know exactly who’s going to start. But it’s going to be late. It’s good news, because both quarterbacks are talented. And we’re looking for the best.”

Could he see a situation in which KU used two quarterbacks? Well, Miles wouldn’t rule it out publicly.

“I would imagine that two could conceivably play,” Miles said. “We’re contemplating that as we go through game week.”

During his afternoon press conference Monday, Miles said there is some advantage to playing more than one quarterback.

If you ask the coach which QB runs faster, though, he has a warning to offer.

“What you want to do is give every rep that you can to the starter, right? The good news is we’ve been in this rotation for some time,” Miles said, referencing how the offense has used more than one primary quarterback throughout spring and preseason practices. “And it’s allowed us to look at and verify over time who the best quarterback was and/or is. You weigh the differences in giving somebody all the reps or, really, defining who the best quarterback is.”

Though requested for interviews by the Journal-World, neither MacVittie nor Stanley was made available to reporters Monday afternoon.

During his most recent season at KU, Stanley went 34-for-47 (72.3%) through the air, passing for 304 yards and three TDs, with one interception, while making two starts and appearing as a reserve on five other occasions.

According to their teammates, both quarterbacks have handled the months-long battle for the starting gig well.

“They're both competitors,” senior tackle Kevin Feder told reporters Monday, “and they love to compete. And it's definitely exciting to watch them back in the pocket and have them throwing the ball around all day long, and having them compete with all the little things that they're trying to get better at each day. So it's great to see that we have two — we have multiple quarterbacks right now that are competing for this spot, and it's just great to see everybody in that room. They bring the best out of each other, and it's great to see. It gives us a lot of faith on the offense that we have some great guys with great minds throwing the ball.”

The Jayhawks don’t yet know how either QB will perform in offensive coordinator Les Koenning’s system outside of a practice setting. Still, junior running back Dom Williams said members of the offense have been impressed during the team’s closed practices.

“We know that both of them can ball out,” Williams said. “Just whoever is out there is going to know the offense and is going to be ready to go.”

If distinguishing skill sets separate them in practices, Williams wasn’t willing to share that information.

KU opens its season at 11 a.m. Saturday versus Indiana State, ranked No. 16 in the preseason FCS poll.

Les Miles speaks to media ahead of season opener by KUsports.com

We had the same situation last year. Under HC David Beatty, I was never confident that he had fully made a decision because of just being unsure and wishy-washy. Didn't lead to great confidence.

Under HC Les Miles, I get the impression that he knows exactly what he wants to do and just isn't telling us.

I have great confidence in the latter, not so much the former.

Yet, Coach Miles still hasn't named a starting QB (days before the opening of the regular season), he's considered to be competent and just doesn't want to inform Jayhawk Nation and the rest of the College Football World.

Yeah, I understand Beaty was (overall) in over his head. But, I don't believe that Beaty is quite as dumb as he's been made out to be (on this site).

Let's move on and hopefully enjoy Coach Miles (and his staff) coaching of this year's team and into the future seasons as well.

The difference is that Beaty was "wishy-washy" on the QB decision through the entire season. Matt is correct. I think the competition really is close. I suspect at this point they want to see both in real game competition before making the decision. I think they'll firm up that decision shortly after the first game. I see nothing wrong with this so long as it doesn't drag out to several games. It sounds to me like a smart move in this situation.

Matt - That’s one of the more even keeled assessments I’ve read, and I don’t particularly disagree with you. Gotta admit though that it’s almost comically ironic. There was an interesting article last year talking about how Coach Beatty worked at building consensus among the staff in game planning etc. It’s a valid and valuable leadership skill, and I think in large part why the players continued to give great effort even after he was fired. At some point leaders have to be decisive and that seemed to escape him. Unfortunately, plenty of people then twisted that into doing everything wrong. Maybe part of the reality is that both coaches know what a winning D1 QB looks like and until it’s evident they aren’t going to say so. I can also agree with Brett’s assessment the other day that Coach sees it in Torry, but he’s still too green to start. Hopefully the first couple games will provide a comfortable opportunity to see what each can do in live action.

@Michael....Amen. The double standards are amazing. I agree 100% that our current coach is a better coach than the previous one, BUT the previous one wasn’t as inept as he was made out to be.

@Steven - Sounds like you missed the bi-polar bandwagon. No worries though. I’m sure it will loop past again. It’s almost funny to think about the “everything right” crowd coming unglued when the first lesticle doesn’t work out.

In his fourth season as head coach, with his two starting QB’s returning, running the vaunted Air RAID offense for the fourth consecutive year and then losing to another FCS school, Beaty invited the criticism because he mind-jacked his own team’s confidence, got in the head of his two starting QB’s and looked like an overwhelmed buffoon doing it. He won 6 games in 4 years and lost AT HOME to TWO FCS teams.

Seriously, get a cause worth defending.

Comparing what Miles is doing with what Beaty did is like comparing a Mustang to a Desk Chair. If you don’t understand the difference, then no one is going to be able to explain it to you. Revisionist history doesn’t change the record, or the position that the roster is in after four years of the David Debacle.

Come Saturday, Miles has to show that he can take a weakened roster, introduce all new systems and win against a good football team. He has none of the advantages that Beaty had last year but I suspect he’ll find a way to get it done. That’s what National Championship coaches do.

Tom Keegan would be turning in his grave hearing that the KU head football coach has yet to name his starting QB - oh what he is still alive and kicking, just annoying others in a much larger media market. Even the great Nick Saban has waited until game time to name his QB in the past. Nothing new for a head coach, even if he knows who will be his starting QB, to wait until days or even the day of to announce. Let’s hope whomever gets the nod knows when to hand the ball to the stable of running backs and when to pass.

Obscene? Did you leave your grasp of reality in Iowa when you defected last year? Oh, wait. You lacked it last year when you quit just like you have when you quit on the other teams.

And still as bipolar as ever. You criticize the Beaty led teams for losing to FCS teams only to twist around and label a team of comparable ranking a good team this year.

And you continue with the “roster mismanagement” mantra in defiance of the coach that is “doing everything right”. I’ve got no problem with what Coach Miles is doing and also agree with his comment about the roster even before he recruited anyone. He said it was a good roster and that we’re close. It’s understandable that you would credit the recruiting to Coach Hull and equally bipolar to miss the fact that Coach Hull was also recruited.

Yes we didn’t win enough games in the past and Coach Beaty was justifiably let go. It’s a shame your bipolar delusional nonsense couldn’t go as well.

Can someone please explain to me why we should be excited about MacVittie? I realize stats don't tell the whole story, but his juco stats are TERRIBLE! And Stanley's stats last year, although admittedly a smaller sample size, were significantly better against significantly better competition.

So what's the deal, and why do we expect MacVittie to be better now?

Len I couldn't agree more. Carter has way more experience at this level and has never really played against the cupcake teams at the beginning of each season. I believe all of his starts are against power 5 teams

The longer he waits, the more I think it's Torry Locklin.