Even though camp practices this August haven’t been “too different” compared to the previous three years, senior safety Bryce Torneden said he is still cognizant of what this preseason means.

“I mean, obviously it’s my last one, so I’m trying to take everything for what it is,” Torneden said Thursday during post practice interviews. “I know I’m not going to get this whole experience again.”

While it may not feel different now, Torneden’s role as a senior for KU football has changed even before the first kickoff of the season, on Aug. 31.

KU football coach Les Miles said he immediately saw Torneden, a Lawrence native and Free State High graduate, as a leader, and has made efforts to include him further in team decisions. 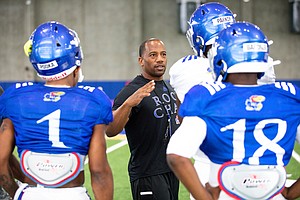 Miles created a unity council, which serves as a collective of players to speak for the team and discuss what the Jayhawks want to accomplish this season. Players voted for two leaders at each position, and senior left tackle Hakeem Adeniji and Torneden were chosen as the leaders of the council.

On the player side, Torneden said the inclusion already has made a difference and being selected as a leader “means a lot” to him personally.

“We’re kind of the voice of the team, so just having that input and being able to talk to coach about some of our needs as well as talking to the team about what he needs,” Torneden said.

Miles described Adeniji and Torneden as players who have “bought in” to what KU wants to improve upon this season.

“I think that when you have leaders who buy in to what you’re trying to get accomplished, it becomes a much easier transformation, because everybody wants to and everybody’s saying the same thing,” Miles said. “‘We’re going to do hard things for people in this room. We’re going to do small things better than anybody.’” 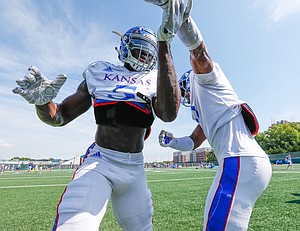 “We haven’t installed too much, just starting fall camp, but I think we’re flying around, hustling and we’re doing the little things right that coaches shouldn’t have to teach,” Torneden said.

The tempo also increased at practice, particularly on Thursday, which Miles described as a “get after it practice.”

Torneden also has noticed the overall intensity and play step up, particularly from safeties Davon Ferguson and Jeremiah McCullough. Torneden said McCullough has a noticeable “confidence and swagger” in the way he plays.

“Obviously fall camp’s not an easy feat for anybody, so just having that tempo kind of makes us continue to push and have that energy,” Torneden said.

In the absence of former defensive leaders such as Joe Dineen, Daniel Wise and Keith Loneker Jr., Torneden is a veteran who other Jayhawks will look to for guidance and leadership. Whether it’s through the unity council or play on the field, Torneden said he’s “confident in the way the team’s coming together" and looking forward to opportunities to best help the team.

“I think it’s just every day being a servant leader, putting others in front of yourself — teammates, coaches. Doing what you do to serve the team best,” Torneden said. “Through that I think you kind of become a leader and become more vocal. Guys look up to that.”

Could someone please reiterate the details of the fan event for Sat 8/10/19 at the new indoor practice facility? Or did I get that date wrong? I could not find the original posting referencing it. Thanks.

Never mind, I finally found it, in the article about Ben Miles entering the transfer portal:

Followers of the Jayhawks on Aug. 10 will get a chance to see Miles and his first KU team in person as the program will play host to a “Fan Day” at its indoor practice facility, west of David Booth Kansas Memorial Stadium.

Miles, his assistant coaches and players will sign autographs from 2 to 3 p.m..

The facility will be open to the public from 2 to 4, with games available for children in attendance.

Kansas Athletics also will have a surplus sale that afternoon, from noon to 5 p.m. on the west concourse of the stadium. KU football apparel, shoes, athletic gear and memorabilia will be for sale.

As for "Mr. T", I pity the fool who presents a tackling opportunity anywhere near Mr. T !!!!