A defensive back whose path through the college football ranks began at the junior college level, Davon Ferguson arrived at the University of Kansas in the spring of 2018 confident that his playmaking ability would get him on the field sooner rather than later.

At the time, the Jayhawks had depth issues at safety, making it seem all the more likely Ferguson, a three-star juco prospect after one season at Hartnell College (Calif.), would play a factor in KU’s secondary during his debut season in Lawrence.

Ferguson intercepted two passes, forced two fumbles and recovered two fumbles during his lone juco season. So the 5-foot-10 Baltimore native figured the KU coaches who recruited him would soon be plugging him into the lineup.

“They brought me in because I tend to make plays,” Ferguson said in an interview with the Journal-World shortly after joining the program.

It took some time for those ball-hawking skills of Ferguson’s to show up on a regular basis at KU, but his development as a defensive back over the course of the past year turned him into one of the stars of KU’s spring game. 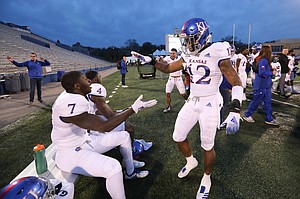 White team safety Jeremiah McCullough (12) slaps hands with safety Davon Ferguson after Ferguson's interception for a touchdown during Late Night Under the Lights on Saturday, April, 13, 2019 at Memorial Stadium.

Ferguson only appeared in four games during his first fall at KU, allowing him to take a redshirt season. Now it’s hard to miss the sophomore safety when the Kansas defense is on the field.

Not only did Ferguson finish up the 15-practice spring schedule taking first-team reps in the secondary, but during the spring game, the offseason’s main event, Ferguson broke up three passes and delivered the defense’s signature highlight when he picked off a Thomas MacVittie pass in the second half and took off for a 74-yard touchdown.

“I thought the defense was strong,” KU head coach Les Miles said. “The first defense pick sixes, and I think it was the style of spring game we would want.”

In 2018, Ferguson appeared on special teams against Nicholls and at Central Michigan. He then played as a reserve safety versus Rutgers and at West Virginia. In his final appearance of the season, he recorded three tackles and picked off WVU quarterback Will Grier.

Fellow defensive back Bryce Torneden said during KU’s recently completed 15-practice spring football schedule, when Ferguson didn’t have as many eyes on him as he did during the final scrimmage at David Booth Kansas Memorial Stadium, Ferguson’s efforts set him up for a standout showcase.

“He’s a hard worker. He comes in every day and really gives it his all. That’s what it really comes down to. That’s why the results are showing on the field, because he worked hard,” Torneden said of Ferguson. “He’s very physical and he just has a knack for the ball, and it’s very apparent, just watching him play. I think he’s just getting more and more comfortable playing and learning those plays.”

The KU defense often will play this coming season with five defensive backs on the field at once. Late in the spring, Ferguson played on the first team, with cornerbacks Hasan Defense and Corione Harris and safeties Torneden and Mike Lee. Ricky Thomas, Jeremiah McCullough and others could factor into the depth chart at safety, too.

With the type of progress Ferguson has made since this past fall, it appears he’s trending toward finally making the type of impact in 2019 he hoped to deliver immediately.

Glad he got the redshirt. Now we have him for 3 seasons.