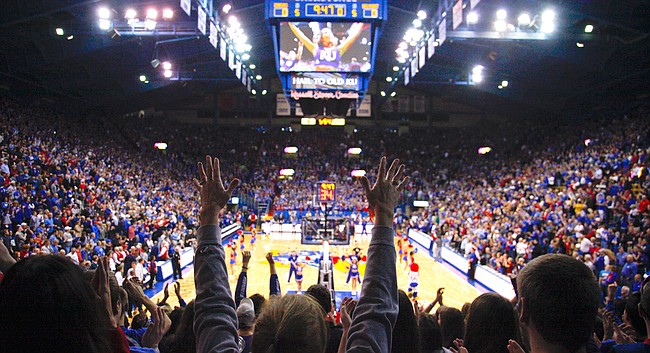 Although Long called the $20 million request in a capital improvement plan a “placeholder,” he told the Journal-World the project would likely consist of renovations to concession stands, restrooms and other fan experience projects in the fieldhouse.

But no official plans are in motion yet, and Long noted that the athletics department would still need to raise the funds from donations first.

“There were plans for that prior to my arrival,” said Long, who started in July 2018. “We’ve continued that planning piece, and we’ve got to do our fundraising in order to make that step. It’s part of a process.”

However, Long said the renovations would not have any effect on the essence of Allen Fieldhouse, one of the most celebrated basketball arenas in the country.

“It has nothing to do with the seating or changing the bowl,” he said. “We have no plans to change the authentic-ness of Allen Fieldhouse.”

The Kansas Board of Regents on Wednesday gave initial approval to a five-year capital improvement plan at Kansas universities, which included the listing for renovations to the fieldhouse. It also included a listing for $300 million worth of renovations to David Booth Kansas Memorial Stadium.

Considering all the millions spent on past AFH renovations, a head scratcher is why air conditioning has never been installed for those balmy days.

Doubt AC could compete with opening the windows in wintertime. Just too many people with 98.6 temps.