For the first time in program history, the Kansas tennis team is hosting the Big 12 tournament during the next four days at the Jayhawk Tennis Center.

But the 20th-ranked KU women are hoping to do much more than create a comfortable and memorable weekend for their guests.

In all, six men’s teams and 10 women’s programs will come to Lawrence vying for the title of Big 12 champ, and KU women’s coach Todd Chapman believes his 3rd-seeded Jayhawks have as good a shot as anyone to take home the 2019 trophy.

“First of all, our only focus right now is TCU on Friday,” Chapman said of KU’s first-round opponent, the 6th-seeded Horned Frogs who will face KU at Noon on Friday. “But do we believe we’re good enough to win the Big 12 tournament? Yes. So we know we’re good enough, but we’re going to have to go out and prove it.” 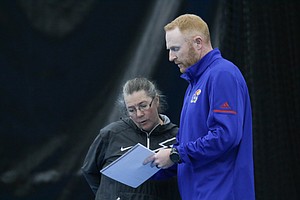 KU coach Todd Chapman looks over a lineup with an assistant coach in a match against Air Force Academy, at the Jayhawk Tennis Center, February 24, 2019.

Chapman’s Jayhawks — KU does not field a men’s team — finished third in the Big 12 regular season standings, two games behind regular season champ Texas and a game behind second-place Oklahoma State, but encountered enough encouraging results during their 16-4 season (7-2 in Big 12 play) to lead them to believe big things are possible this weekend.

In head-to-head matches with the two teams that finished ahead of them in the standings, the Jayhawks lost to both Texas and Oklahoma State by the narrowest of margins, falling 4-3 each time in road battles that came down to the wire.

Since the 4-3 loss to Texas on March 24, KU has reeled off five consecutive victories, two of them coming via 7-0 shutouts and two more by the final score of 6-1.

One of those shutouts was their Senior Day sweep of in-state rival Kansas State last weekend, and Chapman said he came away from that one impressed by far more than the final score.

“Last Saturday was the most complete of a match as we’ve had all year in terms of how we competed and how we handled adversity,” Chapman said. “And getting that kind of effort again this weekend will be key.”

Another key will be the continued stellar play of seniors Janet Koch and Nina Khmelnitckaia in No. 1 doubles action and senior Anastasia Rychagova in No. 1 singles play.

The duo of Koch and Khmelnitckaia, which enters this weekend ranked No. 3 in the latest Intercollegiate Tennis Association rankings, has won the doubles point for Kansas in 19 of KU’s 20 head-to-head matches this season.

One doubles point is awarded to whichever program wins two or more of the three doubles matches played in each round. And the remaining six points come from six singles matches. The first one to four points wins the match and advances to the next round.

To that end, Rychagova is the nation’s 22nd-ranked singles player, up four spots from last week’s mark of No. 26, and Chapman said that trio continuing to play at a high level will be key for KU’s chances this weekend.

“We’ve been really good at No. 1 singles and No. 1 doubles all year,” Chapman said. “Those three seniors that occupy those spots have been stellar for us. And it’s really important that we win the doubles point.”

Half of the women’s field is ranked in the Top 30 nationally and the bottom four seeds in the women’s bracket open Big 12 tournament play Thursday, with the top six seeds jumping into action Friday through Sunday.

Already extremely fond of his program’s new home environment, Chapman said he hoped his team would take advantage of playing such a big tournament at a place they know so well.

“I can’t say that it’s not one,” he said when asked if he thought KU had a home-court advantage this weekend. “We’re undefeated at home this year, 11-0, and the comfort level for your team is definitely a big deal. That’s the biggest thing, our girls are comfortable here. We have a good feel for what our courts are and the crowds have gotten bigger and bigger and fans have gotten more into and there’s an energy you feel.

“We’re excited to host and to have everybody come here and play. It’s a great opportunity to showcase the facility and tennis and Lawrence and we’re looking forward to showing our community to the entire Big 12.”

It is going to be crazy at Rock Chalk Park -- Kansas Relays and the Big 12 Tennis Tennis Tournament?!?! Looking forward to both.