KU baseball bounces back to take down Oklahoma State 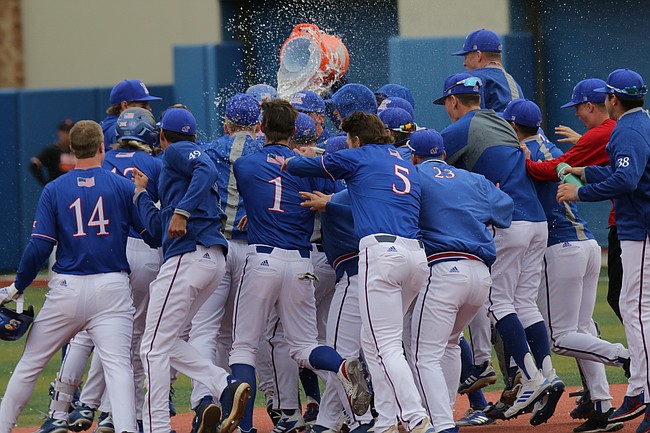 After a leadoff walk, Kansas junior Ryan Zeferjahn gave the Cowboys their 15th and 16th home runs of the series by the third at bat of the game.

“Early I was just trying to get a feel,” Zeferjahn said. “After that, I just knew that’s all they were going to get from then on.”

Zeferjahn settled on the mound after the third run scored to strike out 14 over the next 23 at bats, with just one hit and four walks. He struck out the side in the top of the fourth and sixth innings, throwing less than 15 pitches in each inning.

With one of the best pitchers in the country on the mound, Kansas walked off in the bottom of the ninth to win 5-4 Saturday afternoon at Hoglund ballpark. The Jayhawks rallied back after a day where it surrendered 14 home runs to the Cowboys during a 27-6 loss on Friday.

“They put the two home runs up in the first inning, you’re ‘oh my god, here it goes again,’” Kansas coach Ritch Price said. “Baseball momentum is all tied to the next day’s starting pitcher. We needed that great, great performance and we couldn’t be more proud of him.”

Kansas (18-16, 3-8 Big 12) began its rally back with a run in the second with Rudy Karre scoring on an RBI double from Benjamin Sems. The next inning, Conner VanCleave tied the game at 3 with a two-run shot to right, scoring Brett Vosik.

In the top of the fifth, Zeferjahn escaped an inning where he walked two batters to load the bases without a run, striking out Andrew Navagito to end the inning on a checked swing.

The Jayhawks scored their fourth run the next inning, scoring on a sacrifice fly from Dylan Ditzenberger. Nolan Metcalf reached first on an error as a pinch hitter and Blake Shinkle scored as a pinch runner, advancing to third on a passed ball.

Barry threw a scoreless seventh, but allowed Oklahoma State (21-12, 7-4) to take back the run in the top of the eighth. The Cowboys scored on a wild pitch to tie the game at 4, then Blake Goldsberry came in relief to record the final out of the inning,

Goldsberry recorded the final four outs for Oklahoma State, giving the Jayhawks a chance to walk off in the ninth.

Leading off the Shinkle reached first for his second hit of the year, making his way to third the next at bat as Brett Vosik doubled. Ditzenberger returned to the plate needing a simple fly ball to send Shinkle home, then singled down the first base line to give himself both a Gatorade bath and a 5-4 win.

“To get boat raced like that yesterday, it took great chemistry and great toughness to beat (them) after what happened yesterday,” Price said.

The Jayhawks tie the series at one and look for a series win at 1 p.m. Sunday afternoon.