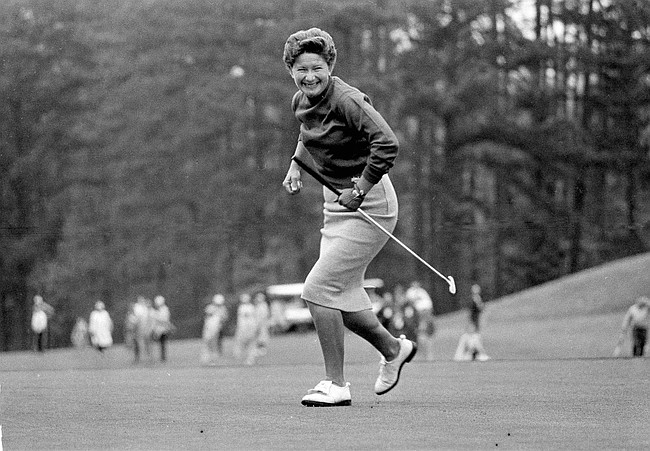 DAYTONA BEACH, Fla. — Marilynn Smith, one of the 13 founders of the LPGA Tour whose 21 victories, two majors and endless support of her tour led to her induction into the World Golf Hall of Fame, died Tuesday. She was 89.

She died in Goodyear, Arizona, surrounded by family and friends, the LPGA Tour said. Smith last was seen in public on March 24 at the Bank of Hope Founders Cup, greeting players as they walked off the 18th green.

"Marilynn was my founder, my North Star and most importantly my friend," LPGA Commissioner Mike Whan said on the tour's website. "In her life, she broke barriers, shattered stereotypes and made others 'believe.'"

"I'll miss her weekly handwritten cards, her daily calls to my office and her love for every LPGA teacher, tour player and staff member," he added. "Quite simply, Marilynn left this world better than she found it and set a standard that will guide us forever."

The LPGA Tour began in 1950. Shirley Spork and Marlene Bauer Hagge are now the only surviving founders.

Smith had turned pro in 1949 at a time when equipment companies began to recognize the potential for growth in golf after World War II. She signed a $5,000 contract with Spalding for up to 100 clinics a year, and she eventually had a signature line of golf clubs.

The LPGA founders, however, were far more than just players. They promoted, they organized and they drove thousands of miles together to pitch women's golf and encourage fans to come out to watch them.

"The word I think would personify it for us was persistence," she said at the season-ending CME Group Tour Championship in 2015. "We didn't see a way to lose."

She recalled going to a fight with Spork one year, where they were to climb into the ring and talk to the spectators.

"Well, this one fellow was just pulverizing the other fellow, and I got woozy because of the blood and everything," Smith said. "Shirley didn't get woozy. She got right through the ropes and got the microphone and said, 'Come out and watch the LPGA play in the U.S. Open.'"

She won the 1954 Fort Wayne Open for the first of her 21 LPGA titles, and captured her two majors in the 1963 Titleholders, where she beat Mickey Wright by one shot in an 18-hole playoff. Smith won the Titleholders again the following year.

Born in Topeka, Kansas, she attended the University of Kansas and won the 1949 national individual intercollege championship after having to scrap up the money for travel expenses. She often told about her father going to the athletic director to ask for financial help and he was told, "It's too bad your daughter is not a boy."

That was her first taste of gender discrimination, and she spent a lifetime working toward opportunity for women in golf.

She created the Marilyn Smith LPGA Charity Pro-Am, which for the last 10 years has raised scholarship money to help female golfers with college expenses. Last year, the charity event provided $5,000 grants for 30 women.

Her first love was baseball, and her dream was to pitch for the St. Louis Cardinals. She once recalls pitching for a boys' baseball team when she was a young girl and had one rough outing. She came out and her mother asked how she fared.

"I took my mitt off and I threw it against the wall and I said a four-letter word beginning with 's' that I had picked up from the boys," Smith said at her Hall of Fame induction in 2006. "When my dad came home from work, she told him what I had said. And he said, 'Well, we'd better take her out to the Wichita Country Club and teach her a more ladylike sport.'"

She thought golf was for sissies as first, but under the tutelage of pro Mike Murra, came to love and excel in golf.

The last of her 21 victories was the Pabst Ladies Classic in 1972, though Smith remained active as a founder, teacher and endless promoter. She conducted more than 4,000 clinics since signing that Spalding contract in 1949, helping more than 250,000 young golfers in her career. She was recognized during the LPGA's 50th anniversary as one of its top 50 players and teachers.

"I'm just an ordinary girl from the Kansas prairie who has lived an extraordinary life, and golf has made it possible for me to travel to all 50 states, 36 countries, to meet five presidents," Smith said when was inducted into the Hall of Fame. "And I've been privileged to play golf with my two idols, Stan Musial and Ben Hogan."

She also played with Arnold Palmer and Jack Nicklaus, with Bing Crosby and some of the LPGA greats.

"How blessed can one get?" she said.

What a great tribute to a tremendous Jayhawk!

I hadn't heard of her before but she clearly left a proud and inspiring legacy.