‘Back and forth’: KU’s Dom Williams, Khalil Herbert splitting spring carries at RB

Running back Dom Williams grips a football tightly during drills on Thursday, April 4, 2019, at the indoor practice facility.

Considering how crowded the backfield seemed for Kansas ball carriers the past couple of seasons, the contrast during practices and scrimmages this spring could have felt jarring for Dom Williams.

While KU’s coaches brought in some walk-ons to help increase the number of available bodies at the running back position, it’s basically just Williams and Khalil Herbert splitting the significant carries during 11-on-11 situations.

And according to Williams that workload has not proven to be too much; just unfamiliar.

“It’s kind of weird having that low (number) of backs,” Williams said. “Based on when I first came in there was probably like eight or nine. And it’s real different just having two going back and forth.” 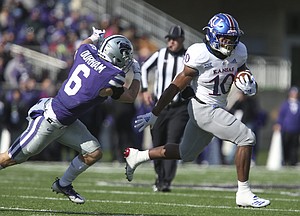 Kansas running back Khalil Herbert (10) leaves Kansas State defensive back Johnathan Durham (6) as he takes off up the field for a long run during the third quarter on Saturday, Nov. 10, 2018 at Bill Snyder Family Stadium in Manhattan, Kan.

Indeed, when Williams arrived in Lawrence as a true freshman, the 2017 roster featured nine running backs.

Right now, at least for the spring, KU lists six backs on its roster, and one is Pooka Williams, who is suspended from team activities for a yet to be determined period of time, dating back to his misdemeanor domestic battery charge this past December.

Outside of Dom Williams, a junior, and Herbert, a senior, the other currently active running backs for KU are Donovan Franklin (played two games at Army), Pelumi Okeowo (from Goddard) and Kelsey Williams (played receiver at Iowa Central Community College in 2018).

The numbers at the position will look different by the time preseason camp gets here in August — regardless of whether Pooka Williams is reinstated by then.

Back on National Signing Day, the last time that KU assistants were made available for interviews, running backs coach Tony Hull said the staff would be open to moving some running backs to other positions once the rest of the 2019 signing class gets on campus.

For now, as well as on Saturday night at David Booth Kansas Memorial Stadium, where the Jayhawks will play their spring game (6 p.m. kickoff), it will be heavy doses of Dom Williams and Herbert in KU’s backfield.

“I feel like we feed off each other,” Williams said. “We kind of like know when each other are tired and sub each other in and out. I feel like that helps a lot.”

In 2018, Herbert averaged 4.4 yards per carry and rushed for 499 yards and five touchdowns in 12 games. Williams averaged 4.2 yards per run and finished with 231 yards on the ground, while playing in 11 games and dealing with a nagging knee injury.

Over the past few weeks, Williams related, he, Herbert and the rest of their offensive teammates have begun feeling more comfortable with the schemes and plays they’re learning from new offensive coordinator Les Koenning.

The running back from McKinney, Texas, also reported that the Jayhawks’ overall approach to spring football has assisted such improvements.

RBs on KU roster this spring:

Dom Williams picked it up as the season progressed, eventually becoming elusive.

Would have loved for Dom and Khalil to have had 4 years with this staff. We might see numbers reminiscent of the Mason years.