University of Kansas basketball senior Lagerald Vick grins while rising up for a slam during Late Night in the Phog, on Sept. 28, 2018, at Allen Fieldhouse.

The evening’s biggest shocker came when the final buzzer sounded on the Late Night scrimmage and one of the quietest players in recent Kansas basketball history took the court with microphone in hand.

And then Lagerald Vick thanked the crowd for coming. Public speaking is outside of Vick’s comfort zone, but there really won’t be any comfort zone for him in his final season. He’ll have to be comfortable with whatever the coach asks of him.

Bill Self, who didn’t think he was going to have a spot for Vick, clearly is putting a lot on the senior. If the guard from Memphis — who originally committed to SMU until Larry Brown left — handles it all without incident, he'll make the Jayhawks better than they would have been without him. 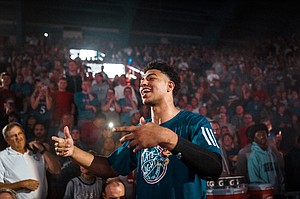 Vick originally declared for the NBA draft, but when it became clear nobody on the planet thought he would get drafted, he withdrew his name. Indiana landed Kansas target Romeo Langford, which left an available scholarship.

Self initially talked in a way that made it seem unlikely he would allow Vick back onto the team, but after they met, Self evidently became convinced Vick knows the deal, and the deal is he’ll stay with the team for as long as he brings a winning attitude.

“Lagerald, I think, has been our best shooter,” Self said. “His attitude has been terrific. He’s played in big games, where none of our other guards really have at game point.”

He’s a nice fit on a team that doesn’t lack much but is on the shy side in terms of backcourt experience and perimeter shooting. Vick is extremely quick for a 6-foot-5 guard, an explosive leaper and a career .378 3-point shooter.

“I think if he can stay focused and hungry and humble, I think he’s going to have a really, really nice senior year,” Self said.

The “if” always will need to be included because Vick's focus and hunger have waned in seasons past. The “if” also makes sense since there no doubt were conditions placed on him returning to the team, although those never will be discussed publicly.

In Friday's scrimmage, in which Crimson defeated Blue, 46-37, Vick led Blue with 10 points, made 2 of 4 3-pointers and had one steal. This steal was the same as every other in his career in that it was impossible to watch it and not ask: Why doesn't a player with so much length and quickness not get more steals?

He stole one more year at Kansas. Indications early in a long basketball season are that it will be for the benefit of all involved.