1. Get Pooka in the open field

It’s easier said than done with defense’s keying in on KU’s star freshman running back, but one of the major goals for offensive coordinator Doug Meacham each week has to be examining the opponent’s defense and finding as many spots as possible for Pooka Williams running lanes.

Blocking from KU’s offensive linemen and receivers in those situations is imperative for large gains, of course, but the point is to give Williams chances to break a long gain, because when he does the Jayhawks are at their best.

Four games into the season, the 5-foot-10, 170-pound freshman sensation from Louisiana leads KU with eight plays of 20-plus yards — and he’s only played in three games. Senior receiver Kerr Johnson ranks second on the offense with four.

Monstrous performances from the high-octane back keyed KU’s two nonconference victories, and the Jayhawks will need their best playmaker busting loose as often as possible to win in the Big 12.

Williams’ 125.7 rushing yards per game rank first in the league and sixth among all FBS players, while his 8.02 yards per carry are second in the conference and seventh nationally.

Just like Baylor did last week, the Cowboys will be coming after Williams both at and behind the line of scrimmage consistently. OSU leads the Big 12 and ranks among the top 25 nationally, allowing just 111.5 yards per game on the ground.

2. Expose OSU’s weakness — if you can

KU obviously doesn’t possess the type of souped up offensive machine that’s in place at Texas Tech — the Jayhawks’ passing game hasn’t even been effective enough for head coach David Beaty to stick with one quarterback through the first third of the season.

But in order for KU to score an upset over Oklahoma State the offense will have to attack what appears to be the Cowboys’ most significant defect, one exposed by Texas Tech. This past week in Stillwater, Okla., Red Raiders freshman QB Alan Bowman threw for 397 yards and two touchdowns in a 41-17 Tech victory.

“Oklahoma State, you usually think that they wouldn’t give up a lot of points,” Sims began. “But it may be different this year. But I can’t just say we’re going to score a lot of points because Texas Tech won. We’ve got to go out and play football, because if we don’t, they’ll come in here and they’ll blow us out.”

Whether it’s senior Peyton Bender or junior Carter Stanley at quarterback for KU, the offense can’t be timid in attacking an OSU pass defense that ranks 103rd nationally (256.8 yards allowed per game).

A typical KU showing through the air (158 yards per game, 116th in the country) isn’t going to cut it.

The names and faces change, but with head coach Mike Gundy running the show, Oklahoma State’s offense always seems to feature a productive quarterback and at least one big-time receiver to complement a strong rushing game (more on that soon).

This year is no different. Even though QB Mason Rudolph and star wideout James Washington are gone, and senior OSU receiver Jalen McCleskey decided just this week to redshirt the remainder of the season and transfer, the Cowboys’ talent cupboard isn’t bare.

Sophomore receiver Tylan Wallace ranks No. 6 in FBS with 110.5 receiving yards per game. This past week he became just the third underclassman in school history to record three straight 100-yard receiving games — 123 against Texas Tech, to follow 105 versus Boise State and a career-best 166 vs. South Alabama.

A first-time starter at QB, senior Taylor Cornelius, through four games, ranks among the top 15 nationally in both passing yards (1,229) and total offense (1,300) and ranks 17th in passing yards per completion (14.8).

Baylor QB Charlie Brewer hurt KU both on the ground and through the air just a week ago, and the defense can’t afford similar breakdowns against Cornelius. 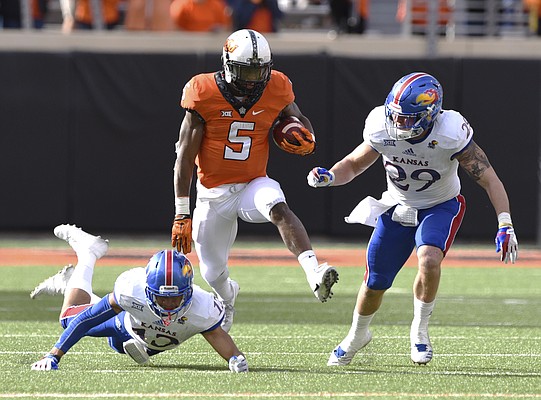 Oklahoma St running back Justice Hill (5) runs between Kansas corner back Hasan Defense (13) and linebacker Joe Dineen Jr. (29) during the second half of a NCAA college football game in Stillwater, Okla., Saturday, Nov. 25, 2017. Hill led Oklahoma St rushing with 58 yards in the 58-17 win over Kansas.

If you were wondering who in the Big 12 could possibly average more yards per carry than Pooka Williams, you’ll see the answer at David Booth Kansas Memorial Stadium when junior Oklahoma State running back Justice Hill takes the field.

“I think Justice is as dynamic a guy as there is in our league,” Beaty said. “He's a very talented guy.”

If the Cowboys’ 5-10, 190-pound junior can score a rushing touchdown against Kansas, then Hill will tie the Big 12 record at 11 straight games with a TD run. He also needs just three rushing yards at KU to become the ninth player in OSU history to reach 3,000 career rushing yards.

Gundy hasn’t been crazy about his offensive line this season, and the coach pointed to the group’s missed assignments against Tech as a major factor in the Cowboys’ negative-yardage plays. But even in a game when OSU had to throw the ball 38 times because it was playing from behind, Hill ran for 111 yards on only 12 rush attempts.

The KU defense hasn’t faced a back of this caliber since, well, the 2017 finale at OSU. On that late-November day, the Jayhawks found some relative success against Hill, who ran for 58 yards and a TD on 16 carries. But that version of the OSU offense torched KU through the air for 494 yards, so it didn’t need much out of Hill.

This time around, the Cowboys may ask Hill to do the heavy lifting. Defensive coordinator Clint Bowen’s group, led by redshirt seniors Joe Dineen and Daniel Wise, will have to prove they can keep Hill from carrying OSU to the program’s seventh consecutive road victory.

KU’s first venture into Big 12 play featured little success this past week, in Waco, Texas, outside of a 72-yard Pooka Williams carry and the defense limiting the Bears to three second-half points.

With only four home games remaining on the schedule, opportunities to win could be fleeting.

How the Jayhawks respond at home to their loss at Baylor should signal how competitive this team can be in Big 12 play. If KU loses big again, that would serve as a reminder of how far it has to go. But if the Jayhawks somehow can knock off OSU it would do wonders for their confidence ahead of a difficult stretch, with back-to-back road games at (currently-ranked No. 12) West Virginia and (No. 25) Texas Tech, looming, followed by a home date with TCU.

Benton, I know OSU's pass D struggled last week, but what makes you think our passing game is better then their passing D?

Since when did Carter Stanley learn how to throw a football? Stanley is worse than Nebder throwing the ball. If Stanley gets most of the snaps, expect a couple of interceptions out of him this weekend.

Peyton Bender has been far from great, but he also hasn't turned the ball over this year. That's not something Stanley is good at doing.

KU may put up some resistance for a half until reality sets in. O-State 77, KU 28.

What?? 77 points huh…. You think they are going to score 11 touch's.. Wow, all offense? Give me some detail here

OSU must have one of the worst pass defenses in the nation if you are picking KU's pass offense to look good against them. Even with 8 in the box so far to stop the run, the pass defense has been sub-par.

I always want KU to look better, but I think this will get away from KU early. Turnovers would help to keep it close, but I don't think KU will have the success like they did with Rutgers and CMU when it comes to turnovers.

I can’t believe there are so many people thinking we will actually score 28 points. Our offense play calling should rank near the bottom of the country. The only way we score 28 points is if Pooka gets lots of open field runs, or our defense scores some touchdowns