Waco, Texas — Backup Kansas quarterback Miles Kendrick left the Jayhawks' Big 12 opener, a 26-7 loss at Baylor's McLane Stadium, with an unspecified injury midway through the third quarter and did not return.

Kendrick had run on back-to-back plays for gains of 13 and 5 yards. After getting up from the second play he was rubbing his shoulder and headed to the sideline.

“He was unavailable after that play,” Kansas head coach David Beaty said. “We’ll get him back, get him looked at, see where he’s at.” 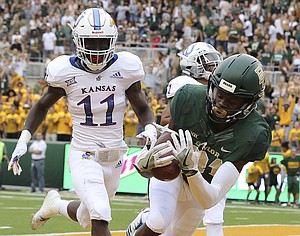 “We felt like we needed to be able to move around a little back there,” Beaty said. “Carter did a nice job of being prepared when his number was called. He’s been like that for three years. He was ready to go. He’s worked his tail off in practice and that made him ready when he got in there. We moved the ball a little with him in there.”

Hasan Defense started at safety in place of Ricky Thomas, who missed the game with an unspecified injury.

“When Ricky became unavailable midway through the week that was a hit because he’s a good little cover guy,” Beaty said. “That one hurt a little bit, but we’ve got other guys who should be able to step in there and be able to do well enough.” 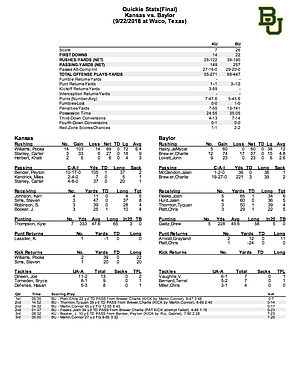 The Bears have won the past nine games in their series with Kansas, meaning Mark Mangino is the last Kansas coach to defeat Baylor.

Too bad. If this team is to have any success I believe it will rest on Mr. Kendrick's shoulders. But in order for that to happen he needs to improve his passing and that will only happen with game time experience.

“We felt like we needed to be able to move around a little back there,” Beaty said. “Carter did a nice job of being prepared when his number was called."

Figured it out just a little too late.

Yeah, imagine if he had actually started Kendrick. What a concept.

Wondering if there are any mis-direction plays in the KU playbook? Oh yes .. at least one - the whole game ...

We had a decent chance against a highly suspect Baylor team, and instead we were lucky the final score was as close as it was. If Baylor doesn't commit a boatload of penalties and miss out on an easy pick-6, it would have been another typical Big XII rout against KU.

And how many times are we going to burn all our timeouts in a half way too early???

Just another example of how Beaty is still in over his head. As I said in another post, we were fooled by causing 12 turnovers against two terrible teams. Now it just looks like more of the same.

Ahhh , and there they are - - -We have missed you guys lmao

Stealing an idea from a Keegan statement on radio: Redshirt Kendrick. Don't waste a year of his eligibility. You've still got your starter and a back-up who has started quite a few Big 12 games. Kendrick might be able to help this program more, later. He won't be a difference-maker on this year's team.

I don't think Beaty has much interest in the future of a program he won't be a part of and isn't it too late to redshirt him?

Agreed on Beaty, this would have to come from Long. I believe that the new rule allows up to four games of play while still preserving a redshirt.

Without completely sapping all of the teams strengths, we need to look at a handful of players on each side of the ball, and take the redshirt approach. With the way Beaty has handled scholarships, we are going to need some bodies down the line and they won't have an impact on the outcome of this season.

I think Kendrick holds promise for this team but I don’t believe at present he is a B12 caliber starting quarterback. He is typical of so many college qb’s with good wheels in that he abandons the pass too early and relies on his feet to get himself out of the hole he dug himself into. As disappointing as Bender has been, he is a pocket passer and only runs when he is forced to and I don’t see how we can generate any offense on the ground if defenses don’t respect our passing. But to your point, redshirting would be a good option if it exists.

Neither is Bender or Stanley for that matter

Nobody wanted this staff to succeed more than I. Guys like Bowen, Meacham, Hull and yes Beaty will all be in the unemployment line soon. It just has not worked. I am not sure why. This is not a bad staff overall. The blame for failure like the credit for success falls on the shoulders of the head coach. So sad for these guys. But KU has to move on and get this program where it deserves to be.

I feel like the shelf life on Beaty is the same whether he wins games or loses. He came here as a stepping stone position. Had he won and brought success to Kansas, he would have taken the first Texas (any D1 school) head coaching job and wouldn't have even sent a post card...

The announcer was shocked Harris wasn't tossed for targeting and I was shocked when they threw the flag. One of us does not understand the targeting rule but in defense of Harris he did not lead with his head.

I work for team (unofficially) I am an (unofficial) Assistant Equipment Manager, who cleans up the extra tasks. (Cleanly) ask tell me, what should I tell coach? I also have the players watch film in my dorm room, I call me dorm room, the film room, and nickname it, better coaching.

Hi Sam! Well, you can ask him to not begin his sentences with "I do know this ……" because it makes him sound like FogHorn LegHorn.

I ask the players who sometime say yes about coming to watching film with me, and I coach them on how Brent Venables uses his violent hands to signal play calling. I watch Venables’s coaching methods via sideline through the tv, and I tape venables doing his style, and send Coach Bowen them.

Our defense still needs to be faster! Our offense needs to use tempo in big 12 games.

What I saw was a talent gap.

I think Sam Allen needs to go back to English class and learn how to write intelligible sentences.