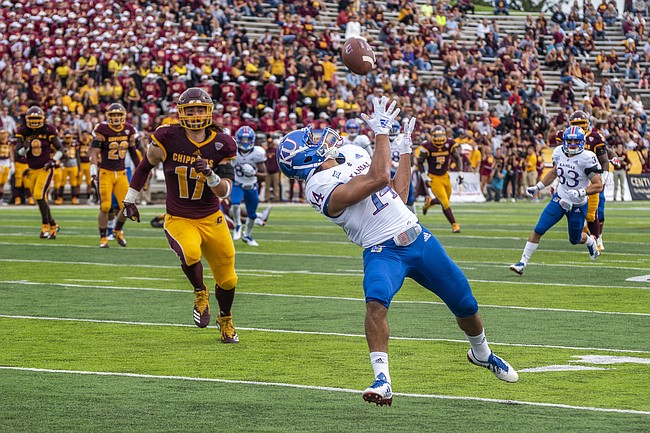 The streak is over.

After an overtime loss in the season opener, the University of Kansas football team ended its infamous losing skid on the road with 31-7 victory at Central Michigan Saturday. The Jayhawks (1-1) had dropped the previous 46 straight road games, which was the longest such streak in college football.

The Jayhawks got on the board first, as senior quarterback Peyton Bender hit senior receiver Kerr Johnson Jr. for a 31-yard touchdown connection with 5:11 in the first half. It marked the first time Kansas had a lead at halftime since the season opener of last season.

Freshman Pooka Williams, who made his debut against the Chippewas, fueled the monumental win with a pair of rushing touchdown in the third quarter. After missing the first week of the season because of a "non-disciplinary" issue, Williams recorded his first career touchdown on a 20-yard run with 10:13 left in the third quarter.

Williams, a four-star recruit, added a 41-yard score at the 8:58 mark for good measure. He finished with 14 carries for 125 yards in his first collegiate action. Senior cornerback Shakial Taylor answered Central Michigan’s lone score with a 55-yard interception return for a score.

Kansas will play host to Rutgers at 11 a.m. Saturday.

Credit where due. Pooka was on point today.

I still think there were massive, huge mistakes by the coaching staff especially in the first half. However, I hope they enjoy this win and actually learn something and don't make those mistakes again.

Yet you aren't a coach.

Oh, yeah, I guess that means no one ever that isn't in the exact same situation as others can offer advice or criticism. Makes sense.

By the way, how do you know I am not a football coach? Your assumptions make you look really bad, Henry.

Yay!! Something!!! In all seriousness, the kids deserve this so much...so happy for them!

So happy for the players. Congratulations on ending the road losing streak. Pooka is a fire cracker. Four INTs. Good special teams play. Let's build on this when Rutgers comes to town.

Well that was better.

Either KU got way better or CMU is really bad. We actually looked like a college football team today.

We were better BUT CMU is REALLY BAD -- definitely savor the win and to the streak no more. Let the guys enjoy the win - competition gonna be better - a lot better Pooka is real just try and keep thing in perspective and realize let's see how he does against Big 12 defense - I think if the O-Line can give him any kind of hole he will be fine. Great win for the kids - Rutgers not very good either maybe we can pull this one out too.

CMU is "really bad"? - they lost by 2 TDs to Kentucky who beat Florida today??

Haven't missed a second of KU football yet this year, and it's all been exciting! Great game today Hawks! Keep it up! #rockchalk #lastfansstanding

much agreed. if a few key recruits hadn't withdrawn i could see this rebuilding.

The coaching staff is their own worst enemy.

Great to end this streak. Still having only 361 yards of total offense while receiving six turnovers does not bode well for the future. With six turnovers and a decent offense we should have much more yardage. I sure would like to see pooka on kick returns. That guy can squirm.

Usually teams that have a lot of running/rushing don't get or need, a large total offense

What stood out most to me is that you can’t run the read option if your qb is no threat to run. Simply stated that is one of the biggest reasons for low offensive output

I remember Georgia Tech a running team put it up nearly 700 yards against us.

Great win …...2-1 start is possible given the fact Rutgers isn't that good either . Sportscenter here comes the Jayhawks

In other news...…. Campus Police were called out to Memorial Stadium to stop students from tearing down the goalposts...…….after hearing about ending the road losing streak the officers looked at each other and joined the fray .

Rutgers only had 134 yards today against Ohio St. They are a bad team and a winnable game for KU as long as they don't turn the ball over.

KU should be favored to win that game next week.

OSU can make anyone look bad.

CMU is not a great team but it was a road win. This team deserves a lot of credit after last weeks loss when pretty much all of Jayhawk Nation wrote them off. This win gives me some hope that they can compete next week against Rutgers.

You're gonna need it if you want to watch KU basketball online if you're in a place without a TV. $50 for the year is worth it.

A Football Saturday Night when we all can actually be completely happy....nice to FINALLY get that ZIT POPPED!.....A round for the house is in order!

Happy for the boys. They deserve it. Coaching decisions still feel off but for a day they pulled it off so congrats. Too bad Pooka missed last week. While I wanted to see more of him today it was probably wise to hold back once game was in hand. RCJH

Great win. Be positive, let the young men enjoy. With that said, we were given 6 turnovers....led to a touchdown and the field goal. Take away those and we still are not an offensive machine by any stretch. Hopefully we can work on that. I’m more and more inclined to think we should roll with Kendrick.

If the players can get some confidence early like the defense did today man I can’t wait to see these hawks play ...this is a good win for us to make up for last week but I am especially proud of special teams looks like Kenny perry has the special teams goin... wish I could be as exicited for meachum getting the offense going pooka is the truth.. Bowen’s defense actually looked like they had a plan ... so happy for these hawks but as a fan base we need to see competitive ball and we got that ttoday... wish this was an every week thing... just wish we could play half as good as we did today in big 12 play.... I am behind our guys 100% but this is one week in a very tough conference can we sustain this type of play ?? this is what it takes to be a threat... I still don’t know if we can do something for real we will see what Rutgers brings us next week...good job Beaty and co for not screwing the guys up they were flowing and u let them play ...

Game Plan: All we need is the other team to have 6 turn overs= Win