1. Let your RBs carry you

A junior, Herbert led the KU ground game with 12 rushes for 62 yards (5.1 yards per attempt), while sophomore Williams added six runs for 35 yards (5.8). It’s a small sample size, and both backs were aided significantly by one 23-yard rush apiece. But one of the bigger surprises of the opener was how seldom the Jayhawks asked Herbert and Williams to get involved.

If you throw in two designed run calls for backup quarterback Miles Kendrick and don’t include the two times QB Peyton Bender took off for large gains because no one was open for a pass, KU only rushed the ball 20 times for 102 yards. In the meantime, starter Bender and Kendrick combined for 38 pass attempts.

KU football fan mailbag: So many questions and answers

Head coach David Beaty pointed to KU’s lack of 1st downs in Week 1 as the primary factor that kept Herbert and Williams from getting more involved.

“I mean the more plays you get to call, the more you get to allow those guys to touch the ball,” Beaty said after KU picked up just 14 first downs and finished with 255 total yards in the home overtime defeat to Nicholls State.”That's something that we've gotta correct. We've gotta get more 1st downs. It gives us a new fresh set of downs. We get more opportunities that way. Simply put, to be able to get the ball in everybody's hands, you've gotta have more downs.”

An offense that sustains drives and keeps Herbert and Williams involved will be necessary for KU to compete with Central Michigan, which allowed Kentucky to rack up 299 rushing yards (7.0 per carry) in a 35-20 Week 1 road loss.

2. Establish quickly last week is behind you

Disappointment ruled the night this past Saturday at KU’s Anderson Family Football Complex, in the wake of FCS opponent Nicholls handing the Jayhawks a home loss.

Given the program’s years of struggles, the mental side of truly recovering from Week 1 will be an important part of the recipe for a win in Week 2.

A quick start for both sides of the ball is the perfect way for the Jayhawks to put their most recent defeat far behind them. Considering the offense began the season with a three-and-out and the defense relented in its first series of the season, allowing the Colonels to travel 78 yards for a touchdown, there should be even greater incentive for the Jayhawks to prove in the opening minutes at CMU that they learned some valuable lessons from their 2018 debut.

"They're coming off a difficult loss at home, one where they made mistakes, which were costly," Chippewas coach John Bonamego said earlier this week."You have to understand who you're playing. They could be dangerous. We need to take care of our side of things and focus on us."

Offensively, the Jayhawks didn’t have much to feel great about against Nicholls, especially when considering two Colonels miscues on special teams gifted KU 10 of its fourth-quarter points.

However, one positive turned out to be the complete absence of interceptions and lost fumbles.

Repeating that feat at CMU will be a challenge. In the Chippewas’ road loss at Kentucky (an eight-point game entering the fourth quarter), they gave themselves a chance to win on the road against an SEC opponent by snagging not one, two or three, but four turnovers.

CMU enters the weekend ranked sixth in the nation with four takeaways.

While KU didn’t cough the ball up against Nicholls, the 2017 Jayhawks lost 26 turnovers during their 1-11 season. So a regression toward the past would make pulling off a road victory that much more difficult. 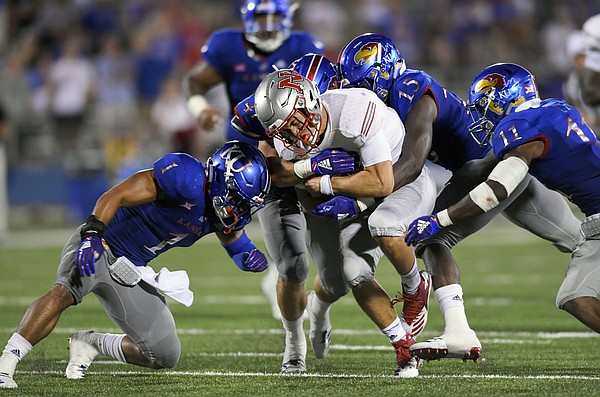 In the first start of his college career in Week 1, Tony Poljan didn’t dominate through the air, completing 17 of his 27 pass attempts for 137 yards. But the 6-foot-7, 235-pound QB made use of his legs, rushing for team-highs of 16 carries and 47 yards.

KU’s defense knows it is facing an unproven quarterback, but redshirt senior linebacker Joe Dineen said Poljan can present problems if the Jayhawks aren’t prepared to stop him.

“They like the QB run game a lot, two really good running backs and a good O-line,” Dineen added, grouping backs Jonathan Ward and Kumehnu Gwilly with Poljan as players the KU front will have focus in on. “Their quarterback’s like 6-7, he’s a really big dude. They like to run him a lot, so we’ll have some stuff in place to get that stopped.”

Between Poljan’s inexperience and the knowledge that CMU will likely call upon him to run often, the KU defense needs to do all it can to rattle the sophomore’s confidence as both a passer and rusher.

“I thought the guy poses some problems,” Beaty said of Poljan. “He's a lot different than what they were last year with regard to how he moves around, but he's definitely capable of hurting you. He can hurt you with his arm, and he's certainly a big dude. He's not easy to tackle. You get in 3rd-and-short situations, I mean, the quarterback run is something you have to be aware of.”

Kansas, owner of major college football’s all-time record for most consecutive road losses, currently at 46, hasn’t won in an opponent’s stadium since Sept. 12, 2009, at UTEP.

The streak that refuses to die makes winning on the road that much more important to the KU players who have been around the longest. Still, the desire to rectify past failures surely doesn’t mean as much to the current roster as going out and trying to prove the Jayhawks are a better team than they appeared to be in a home loss to Nicholls.

Throw in growing public speculation surrounding Beaty’s job security and the players have no shortage of motivators to carry with them onto the field at Kelly/Shorts Stadium.

Why are we not scheduling UTEP?

Now, there's a match-up I would pay to see,,,,,well,,,,not pay, but it might be close, like when my son's little league team beat the green sox 15-14 on 6 consecutive walks. There could be prop bets on the number of turnovers and blown pass coverages. As for this game, CMU 34 - KU 21.

OMG, I feel sorry for the pitcher.

I hate it, but I'm just positive we're gonna get smoked!!!

I'm going to be there so it would be a real thrill to be proven wrong and see the end of the streak.

Len, I am Hoping that you will Experience a Pleasant Surprise! Nothing better than a "Sprinkling of KU Fans" invading Mount Pleasants, MI! Rock Chalk!

Why does Beaty think he is so funny, he sounds like FogHorn LegHorn, totally clueless chatter. I am embarrassed for him…

Just show up! That’s all I want. Just a chance to win.