He is to football what the third-base coach is to baseball. In both jobs, he only merits mention if he screws up.

John Wirtel has a realistic shot of having the longest NFL career of any senior on the Kansas football roster, yet is one of the Jayhawks’ most anonymous players.

NFL scouts aren’t just watching defensive lineman Daniel Wise and linebacker Joe Dineen. They’re watching the man who forever turns his back on them, too.

Don’t feel out of the loop if this is the first you have heard the name, even though he has been a football player at Kansas for six years. 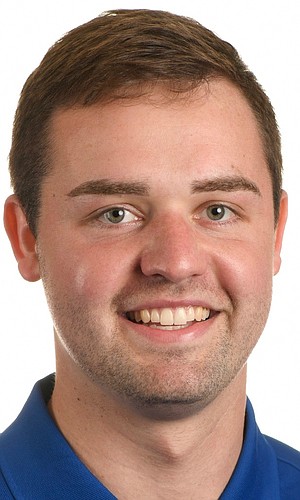 His anonymity can be traced to him being so good at his job.

It took him finally having the opportunity to play in the same Big 12 game as his brother for him to become a story.

Growing up, Steve Wirtel was three years behind John in school. Now, he’s one year behind him. It’s not that John’s on the slow side. On the contrary, he has made the Big 12 commissioner’s honor roll five times and is on course to earn a master’s degree this coming summer.

He was limited to three games in 2016 by a knee injury and to four in 2017 by another injury to the same knee. He had the year of eligibility restored both times.

The Wirtel brothers will be on opposite sidelines for Saturday’s 11 a.m. kickoff at David Booth Kansas Memorial Stadium. Their parents will be in attendance, rooting all day for No. 39 on both teams.

John wore 68 most of his career and switched in the spring to No. 87. The coaches considered using tight end Jack Luavasa on the punt team, and the rules forbid two players from wearing the same number and playing at the same time.

Head coach David Beaty took it upon himself to explain the situation and ask Wirtel what number he would like to wear.

“I decided to switch to No. 39 to try to create a little more of a (sibling) rivalry with him and get in his head a little bit and let him know who the better No. 39 is,” KU’s Wirtel said. 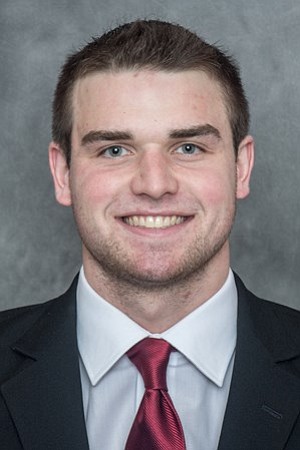 It seems as if the fact that they perform the same job is proof that long snappers don’t have to have similar personalities.

“He’s very, very competitive, very feisty,” John said. “He’s one of those who likes to talk a lot. I’m more reserved and stay focused on my thing and do my job. That’s the biggest difference. He’s a big talker.”

The Wirtel brothers come from Orland Park, a suburb south of Chicago, and played football at Mount Carmel High, where Simeon Rice and Donovan McNabb competed a generation earlier.

Surprisingly, neither Wirtel is a fan of the Chicago Bears. Their father’s godfather, Chet Ostrowski, a defensive end from Notre Dame, played for the Washington Redskins, so the brothers and their father always have rooted for the ’Skins.

“My mother’s the only Bears fan,” John said.

He added that he’s an even bigger fan of the Rams because his earliest football memories are of the “Greatest Show on Turf,” of offensive coordinator, then head coach Mike Martz, quarterback Kurt Warner, running back Marshall Faulk and wide receivers Isaac Bruce, Torry Holt and Az-Zahir Hakim.

That made for far more exciting viewing than what Wirtel watches most of the time now: video of his backside.

He studies video of each of his deep snaps.

“Even the good ones to create a muscle memory of what’s working, and if something does go wrong, or if one’s a little low, it’s kind of a mental fix,” he said. “I’ve seen so many good ones that if I have a bad one. I can normally point out relatively quickly what I did wrong. And a lot of times I can just feel it if it’s in the game.”

The extra two years in the program have enabled John to increase his upper-body strength to the point he changed from what is called a “no-look snapper” to a “look snapper.”

“A no-look snapper will look through, find his target, the punter, and then look up and won’t look through again until after the snap,” Wirtel said. “His head will start the motion. It’s used for guys who aren’t as strong yet, so they need to generate more force with the lower body.”

He said his accuracy increased once he changed his form to become a “look snapper.”

“You’re looking through the whole time,” Wirtel said. “It’s for guys who don’t need to use their legs as much because they’re strong enough in their upper body.”

Wirtel praised by name members of the strength, nutrition and special teams staffs for making him better at something he’s been doing for more than half of his life.

He said he thinks he started long snapping as a fourth grader, playing Pee Wee football for the Orland Park Pioneers.

“Each division had a weight limit and our long snapper had to get bumped up,” Wirtel said. “My dad was our special teams coordinator. My dad tells the story that he’s sitting in the car and he’s thinking, ‘I need someone long, someone who can do this,’ then he goes, ‘Duh!” looks at me and and had me try it. That’s where I’ve been ever since.”