What a difference a few weeks can make.

It turns out Kansas quarterback Miles Kendrick just may end up sitting out the rest of this season after all.

KU football coach David Beaty said at his weekly press conference Tuesday that Kendrick, a backup sophomore QB who hasn’t appeared in a game since suffering a shoulder injury at Baylor on Sept. 22, could be a candidate to redshirt.

“That's best for him if we can do it,” Beaty said of potentially not playing Kendrick from here on out.

This revelation from KU’s fourth-year coach came four weeks after Beaty, when asked whether Kendrick could redshirt this season, replied that the QB was “not at all” a candidate to do so.

Beaty walked that statement back and then some on Tuesday, when asked what had changed to his preseason plan to play Kendrick in every game if he was healthy. KU has listed Kendrick as available to play in each of its previous three games, but the 5-foot-10 reserve from Morgan Hill, Calif., hasn’t competed on a Saturday since injuring his throwing shoulder in the second half at BU.

“Him coming back at this point in the year is going to be predicated on need,” Beaty said Tuesday, with four games left in the season. “If we don't have to use him, then we won’t.”

During the season’s first four weeks, Kendrick completed 11 of 19 passes for 100 yards, with one touchdown and no interceptions. The dual threat QB also carried the ball 16 times for 47 yards and a TD.

Thanks to a new rule put in place by the NCAA earlier this year, Kendrick and other KU players who have not yet surpassed the four-game limit are eligible to use 2018 as a redshirt season.

Describing Kendrick as “a very unselfish kid,” Beaty said he and the offensive staff have continued to give the sophomore repetitions at practices.

“He still takes snaps with us every week. He prepares himself well,” Beaty added. “But there's only so many snaps to go around to be able to get everybody completely prepared.”

If KU found itself in a situation where starting QB Peyton Bender and Carter Stanley were no longer available, the notion of redshirting Kendrick could fly out the window.

“We’ll see. We’ll see. We’ve still got a lot of ball left to play,” Beaty replied, when asked what changed on his stance regarding Kendrick as a redshirt candidate. 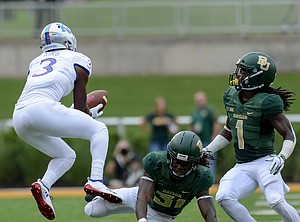 “It's like I told him and all those guys, ‘Guys, we're not considering that with anyone,’” Beaty shared.

However, KU’s coach quickly added: “We're not going to put him in the game and play him for two or three plays and waste a year. That would be unfair to him.”

A couple of KU receivers who have dealt with injuries also remain redshirt possibilities. Junior Evan Fairs and sophomore Quan Hampton both have only played in four games at this point.

According to Beaty, Fairs is “not quite there yet” in terms of being healthy enough to compete on game days.

“We'll have to start making decisions on some of those guys here. I would probably be more pressed to use Evan if we weren't producing in those positions right now,” Beaty explained. “But my main goal is to make sure that he's healthy. Same thing with Quan. They're battling injury. I don't talk in-depth, but they're still battling with some things that may take a while.”

Fairs only caught two passes for 28 yards while appearing in the first four games of the season.

On Oct. 4, Beaty stated no plans existed at that juncture for redshirting specific players, but added he and the coaches “may” end up identifying candidates.

“But we're not trying to do that,” Beaty said four weeks ago. “Some of it will come as we move along through the season, and guys are just not quite prepared yet, right? But there (are) no plans to redshirt anyone.”

He should redshirt. Beaty mishandles another talented athlete. Pathetic

Kind of blows up the notion of only making decisions for the sake of this year at the expense of future years, but haters will hate and spew more ignorant drivel.

He wasn't going to play him anyway -- Beaty doesn't care what happens to him. Again ....mishandling of talent.

SInce you're the "anonymous" expert.

And so it's decision time. Injured players and players with less than 4 games played will make their decisions. This is where the recruiting class debacle ends up being not such a big deal. Sure we won't have any 3 or 4 star players but that's nothing different than normal. We have 25 Seniors and I think over 30 Juniors. There will be a number of them holding back. I expect many of the Freshman will redshirt and then KU will find a bunch of un-recruited 2's to fill in. I think we have 18 schollies to give It's times like these you recruit a bunch of tweener's and big out of shape linemen and make them into something. Which of course maybe too much for Beaty to handle.

All you needed to type was your final sentence there Brian....

Looks like there are now some limits on HCDB and I'm sure more to come.