1. Correctly identify the QB who gives you the best chance

Who will start at quarterback for Kansas this week?

Head coach David Beaty gave the job back to Peyton Bender following a bye and the midseason firing of former KU offensive coordinator Doug Meacham. But Bender, a senior in his second season with the Jayhawks, never looked fully comfortable until the latter stages of a 48-16 loss at Texas Tech a week ago.

Ahead of TCU playing in Lawrence, Beaty said the QB job would be determined at practices this week.

On an abbreviated episode of the KU Sports Hour, KU football beat writer Benton Smith and sports editor Tom Keegan answer your Twitter questions — from timeouts and quarterbacks to KU's one-man recruiting class and a hot seat for David Beaty.

So only Beaty and those with whom he works closest know at this point which of KU’s three QBs — Bender, redshirt junior Carter Stanley or sophomore Miles Kendrick — impressed enough to earn the start against TCU.

“When we get open receivers in the Big 12, you can't afford to miss those guys. You've got to make those throws,” Beaty said earlier this week.

With five games left in the season, KU still doesn’t have a definitive starting QB. If the Jayhawks want to nab a win or two before 2018 has come and gone, they had better land on one now.

2. Defense rising to ‘the moment’

Obviously KU’s offense didn’t give its defense much help at Texas Tech. Still, the Jayhawks’ defenders allowed 553 yards of total offense (second-most this season, behind 568 versus Oklahoma State).

When asked to identify what other issues plagued KU’s defense at Tech, Beaty said the Jayhawks spoke this week about winning in what he repeatedly called “the moment of truth,” referring to 50-50 battles.

“When there's a play to be made, that's where we have to be able to step up and be able to provide ourselves with more than the opposing team does,” Beaty said.

Third down has proven to be a breaking point for KU’s defense this season. Through four Big 12 games, opponents are converting on almost half of their third downs (25 of 51). Texas Tech went 8 of 14.

By Gary Patterson standards, TCU has struggled with protecting the football and winning the turnover margin this season. The Horned Frogs are 106-14 all-time under Patterson when coming out on top or finishing even in that category.

Not since the Frogs’ season opener versus Southern (plus-three) have they finished a game with more takeaways than giveaways. They’re minus-10 in turnover margin on the season and minus-nine against their conference opponents to date — Texas, Iowa State, Texas Tech and Oklahoma.

Causing turnovers, of course, happens to be one of the KU defense’s specialties. With 12 interceptions from 10 different Jayhawks — junior safety Hasan Defense leads the way with three — Kansas ranks sixth in the nation in picks.

Playing without receiver KaVontae Turpin (suspended) and QB Shawn Robinson (injured) for the first time this season, TCU’s offense could prove susceptible to mistakes. If that’s the case, KU’s defense must capitalize for the home team, nearly a 14-point underdog according to Las Vegas, to pull off an upset. 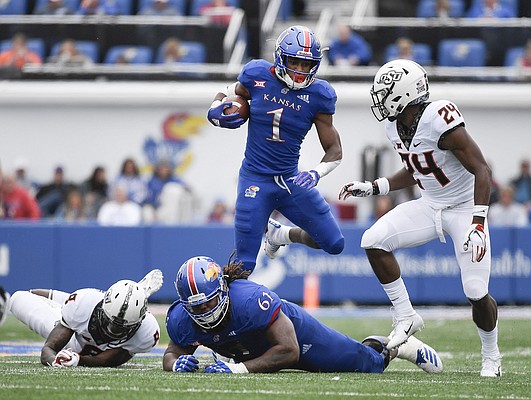 Kansas running back Pooka Williams Jr. jumps over a teammate to gain more yards against Oklahoma State on Saturday, Sept. 29, 2018. by Mike Gunnoe

Pooka Williams vs. all comers

Since his first game in a Kansas uniform, in Week 2 at Central Michigan, running back Pooka Williams has embodied hope for the offense with his open field ability.

As opposing defenses quickly figured that out, though, it became difficult for Williams, a 5-10 true freshman from New Orleans, to consistently dominate.

Still, it’s obvious at this juncture of the season that KU needs a Williams-centric offense to maximize its potential. With 14 catches for 115 yards, Williams is the Jayhawks’ fifth-most productive receiver, as well as easily their best rusher (88 carries, 620 yards, four touchdowns).

“Pooka,” Beaty said, “I don't know if I have the words for how well that guy's played for us. Just phenomenal.”

As the season winds down the challenge for Beaty, who named himself offensive coordinator upon firing Meacham, will be involving Williams as much as possible.

The difficult task for the freshman back will be finding new ways to make game-breaking plays when everyone on the TCU defense will be gunning for him.

With TCU playing outside of the Texas state borders for the first time in 2018 and having lost four of its previous five games, this very well could be the most winnable game left on the schedule for a Kansas team that hasn’t won a conference game since 2016 — 14 Big 12 losses in a row.

The KU defense figures to enter the Jayhawks’ first home game in four weeks fired up and focused. But can the offense do the same and give the Jayhawks a chance?

A win against TCU could provide KU with the jolt it needs to compete the next couple of weeks, with matchups against Iowa State (3-3, 2-2) and at Kansas State (3-4, 1-3) ahead.

Yet another loss, however, could potentially prove demoralizing, even for the most resilient veterans on the roster.

We may be incapable of beating anyone left on our schedule but TCU is a team who should not embarrass us the way Tech did. If Beaty lets this game get out of control I would not be surprised if Long pulls the trigger on Sunday. That should make a lot of people happy.

Let Beaty take all the losses. Fire him after the Texas game and announce that KU - FINALLY- is going to take football seriously.

That would be my preference. If he's going to pull out a W it will have to happen in the next 3 games. Last 2 games against OU & UT will be blood baths.

I tried to tell people that were "fans" rooting for KU to lose... and by the comments here, you now know that some KU fans would rather lose now in hopes of getting a coach than in 3 or 4 years, they'll root for to lose again. Not real fans.

Amen Micky. The comments are beyond pathetic. I’m frustrated and completely tired of the last EIGHT years, not just the last 4 years. But I will not bash the coaching staff or hope for losses. Those kids deserve better from us

The weather forecast calls for a "perfect day for college football"! I sure hope that KU Fans will Pack the Stadium!

I think KU has a good chance of winning this game! The key is our Defense making life miserable for the former Penn Quaker QB! Hold TCU to < 20 points, and KU Wins, independent of which of the 3 KU QB's start and/or finish.