Kansas forward Dedric Lawson (1) puts up a shot against the Emporia State defense during the first half of an exhibition, Thursday, Oct. 25, 2018 at Allen Fieldhouse.

After weeks of most Kansas basketball discussions centering more on potential trial outcomes than lineups, the Jayhawks got to lose themselves inside a packed Allen Fieldhouse on Thursday night.

While withholding sophomore big man Silvio De Sousa from competition as KU continues to evaluate his status, in wake of what was described as “new information” that emerged during the college basketball corruption trial in New York, Kansas easily handled Emporia State, 93-55, in its exhibition opener.

A preseason All-American making his unofficial KU debut after sitting out the 2017-18 season as a transfer from Memphis, junior forward Dedric Lawson wasted no time in looking like a natural focal point for the Jayhawks’ offense. 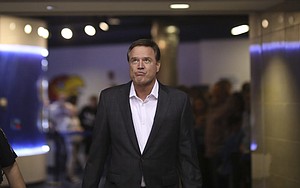 Lawson put up a double-double in the preseason opener, finishing with 31 points and 15 rebounds.

He was one of 11 Jayhawks to play double-figure minutes, but by far and away the leading scorer. 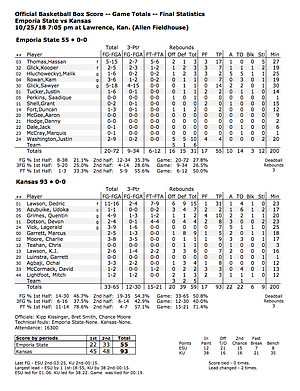 None of Lawson’s Kansas teammates joined him in double figures until the game’s final minutes, when freshman guard Quentin Grimes reached 10 on a 3-pointer with 3:40 to go.

• The game turned when: As many buckets as the Jayhawks’ various lineups produced, Lawson set the tone early by scoring the first 10 points of the exhibition for the No. 1-ranked team in the nation.

Smooth, first at the foul line, then scoring both inside and from beyond the 3-point arc, Lawson had KU up 10-3 before the first media timeout.

Not long after that, KU’s bench unit got invoiced, too, with forward Mitch Lightfoot and guard Charlie Moore draining a triple apiece, pushing KU’s lead to 21-6 by the 13:00 mark of the first half.

The Hornets never really stood a chance, and the Jayhawks reminded them of that quickly.

• Offensive highlight: It didn’t come until a little more than eight minutes into the second half and in his 13th minute of action, but starting center Udoka Azubuike finally looked like his imposing self on his first basket of the night.

Senior guard Vick whipped a pass toward the middle of the paint as Azubuike came off a screen.

Perhaps channeling the frustration of being scoreless in the second half of an exhibition, Azubuike didn’t put the ball on the floor — a move that had cost him and other KU bigs earlier on — and thew down a two-handed jam over Emporia State’s Justin Washington. The slam not only had the ferocity of a typical Azubuike dunk but also came with some extra sauce, in the form of the ball (unintentionally) hitting Washington in the face after KU’s 7-footer threw it down.

• Defensive highlight: Sawyer Glick didn’t know what he was about to get himself into.

Just trying to provide Emporia State’s struggling offense with some kind of a boost as the shot cock was winding down midway through the first half, Glick rose up for a 3-point try on the left wing.

The problem was KU freshman Grimes knew exactly what Glick had in mind.

The 6-foot-5 guard timed his contest of the 3 perfectly, allowing him to not only block the shot, but retrieve it and push the ball up the floor for a layup and a 25-6 Kansas lead.

Quentin Grimes with the block and then a layup on the other end #kubball pic.twitter.com/CG4Xkb9OIH

The Hornets began the game misfiring on 18 of their first 20 field goal attempts. Those struggles were the direct result of KU hitting the court locked in on both ends, despite obvious mismatches all over the floor.

ESU shot 27.8 percent from the field in defeat.

• Up next: The Jayhawks will be back in Allen Fieldhouse in a week for another Thursday night exhibition, this one against Washburn to close the preseason schedule.

Who cares. Get your program and assistant coachs under control. Embarrassing.

the assistant coaches havent done anything..some lawyer making an unfounded claim about a KU assistant isnt not proof of guilt..

If you don't care then you shouldn't be here posting and should likely find a new team to root for.

Caring here and glad the coaches are far more controlled than the mud slinging, felon protecting lawyers that proved nothing more than that they were representing criminals.

What does KU "evaluating his status" have to do with this game? it was just an exhibition game, so why wouldn't they have played him? If it turns out that he is able to play in the season, it would be good for him to have some time on the floor.

On the other hand, this could be a sign that they don't feel good about him getting to play at all, since they chose to sit him. Maybe they did it so that the players they knew would be there would be able to get their time in.

Glad Kansas handled its business like the #1 team that it is supposed to be!

Dedric and Grimes will be our top scorers. Big guys needs help from coaching staff and the team, they need to learn to toss/lob the ball up instead of directly hard-pass to open man under the basket - let him fly and dunk the ball instead, not too many plays drawn for the bigs. Too many standing around. Garrett's 3pt is still ugly, he needs to go all the way utilizing his quickness moving with ball more often. He is Mount Pelée waiting to erupt. Dotson is as quick as advertised. Moore will be our 3pt specialist with his quick & beautiful trigger. Vick should use his length to go inside more. Lawson & Agbaji will play important bench role. Our TO# stinks, but this will improve over time. Rock Chalk!

News Flash. De Sousa will not play this year. How can he? His amateur status is gone. When he or his family accepts financial benefits his playing days are over. Why prolong it. Just release the kid and allow him to join the D League in the NBA.

either im looking at the wrong post ……..but I believe it was about Lawsons 31 points and 16 rebounds or something along those lines ………..Lets talk about His Performance and the positive way he will impact the team......The bitch and moaning about Desouza needs to go on the post when it was announced he was going to be held out .One thing I ve noticed is when there is a negative post there are so many opinions and posts ….but when there is a positive story about a player or something about the team …...not a lot of feedback. I'm glad that THE UNIVERSITY OF KANSAS JAYHAWKS BASKETBALL TEAM is back on the court.

totally agree Mallory! I was super impressed with Dedric as it was the first time I have gotten to see him in action. I would use two words to describe his style, smooth and efficient. Everything looked so effortless to him out there. Grimes is going to be special too, I loved the way he put the ball on the court and took it north/south.

D Lawson played great. Doke struggled a bit but we know what he can do. Vick actually looked more under control. We have good even great players at every position. Besides the turnovers, not really much to criticize. What did seem odd to me was that Allen Field House was quiet. Empty seats was not something we see but it was glaring. The crowd was not participating and even the Rock Chalk Chant was missing something. Hopefully the crowds get better and the turnovers go down other than that, this team has incredible potential.