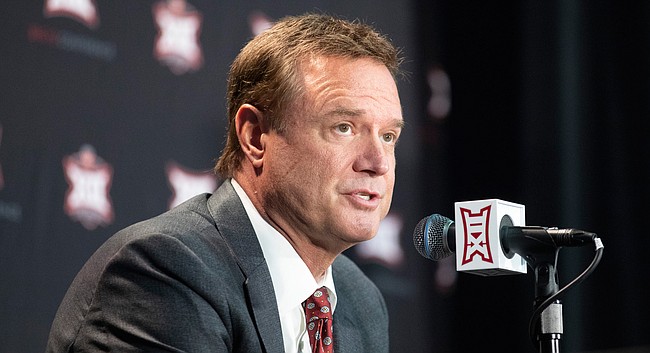 Kansas head coach Bill Self addresses media members at the beginning of his segment during Big 12 Media Day on Wednesday, Oct. 24, 2018 at Sprint Center.

Kansas City, Mo. — Adidas, apparel partner of the University of Kansas athletic department, was found guilty of defrauding the university, and it was the best news the nation’s No. 1-ranked college basketball program had heard in months.

It was this type of trial: You find out it has been determined that your business partner went behind your back to break rules and the first thing you want to do is find a private area where you can do back flips to celebrate the good news.

Plus, for the moment at least, KU has no plans to wriggle free from its lucrative exclusive arrangement with Adidas.

The federal government set out to portray Kansas as a victim of Adidas, which paid money to representatives of two basketball players who were freshmen a year ago to steer them to Bill Self’s perennial national-powerhouse basketball team. 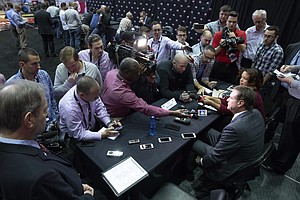 By doing so, Adidas stripped Billy Preston and Silvio De Sousa of their amateur status and therefore victimized Kansas. We’re back to where we started with the nation’s top basketball program painted as the victim.

If you’re looking for KU’s rescuing hero here, turn to T.J. Gassnola, a former AAU director and Adidas consultant with a criminal past. Gassnola testified under penalty of perjury that KU’s coaches knew nothing of the payments. If this were a Western, Gassnola, black cowboy hat atop his head, would come riding in on a stolen horse to save the day.

A statement released under the names of KU chancellor Douglas Girod and athletic director Jeff Long celebrated the athletic department’s purity, saying, in part, “We remain fully supportive of our student-athletes, our coaches and our men’s basketball program. Coach Self and Kansas Athletics are committed to maintaining a culture of compliance, and we will continue these efforts. Kansas Athletics has been, and will continue to be, committed to excellence and integrity.”

Not a hint of embarrassment in those bold words.

Perhaps the folks on the hill could conduct training sessions with Adidas officials to teach them how to comply with said culture of compliance. If, that is, Kansas decides to sign off on the extension. The joint statement said that decision hasn’t been made.

The verdict arrived roughly four-and-a-half hours after Self revealed that Silvio De Sousa will not play in KU’s exhibition opener vs. Emporia State because of “recent developments within the trial” that necessitated a joint eligibility review conducted by KU and the NCAA.

The “recent developments” might refer to Gassnola’s testimony that he paid De Sousa’s guardian Fenny Falmagne $2,500 to pay for online classes so that he could graduate from IMG Academy to enroll at Kansas. Gassnola also testified that he had agreed to pay Falmagne $20,000 to help him to repay a Maryland booster who had paid Falmagne $60,000 for De Sousa to go to Maryland, but never did pay him because news had broken about the FBI investigation.

This is all important stuff for you to know in case you stumble on a GoFundMe account entitled, “Every Penny Helps Fenny.” If Fenny can find six million donors to donate a penny apiece, he can repay the Maryland booster. I for one would hate to see any of these fine, upstanding men get beaten out of a cent for all they do for youngsters.

Bill Self reacts to guilty verdict in college basketball corruption case by KUsports.com

Hey Keegan, your snarking is wearing thin here. We all know you have delusions of grandeur about being the next Dale Hansen to expose corruption so deep that it warrants a death penalty, and winning a Pulitzer or Peabody or whatever that excellence in journalism award is. But this isn't the SMU scandal, and you're no Dale Hansen.

You are wrong on so many levels. Tom is evaluating the verdict for people who haven't studied the whole case. He is doing so from the angle of how this outcome affects KU sports. Basically he was just reporting the facts.

As far as I'm concerned, this matter is closed until the NCAA reviews whatever comes out of the two trials next year on the others. Once they have done all that, they can do whatever they want, but for now, its time to start the season.

What is clear: Adidas .. at a minimum.. committed impropriety by paying guardians / Parents to steer recruits to KU and other Universities. With Adidas illegal activity... DeSousa’s college fate changes and he came to KU.. something that would not have happened without $$. DeSousa shouldn’t be allowed to play. Preston’s mom got a lot of money from Adidas.. already testified to in court. Apple Jones ( Josh Jackson’s mom) (Feb 28 Yahoo sports article) is said to have taken cash and monthly payments from Adidas... to which Josh Jackson commented this week that he “did n’t recall” meeting with said person. So we have Adidas (along with Nike and Under Armour) guilty of all these shady dealings... and we are going to look the other way and continue with Adidas?

maybe KU should start a new trend and ask Puma if they wanna get into college athletics LOL...but to dispute a point you made about DeSousa...Silvio himself wanted to come to KU..the whole reason Gassnola had to offer SD guardian 20k was to pay back UA for getting SD to go to Maryland..If Silvio wanted to go to Maryland, he would have taken to 60k that was offered, then KU's only concern would be of a kid that they held out the entire season since SD would be playing in College Park and not Lawrence..but I agree..if I were the KU AD, Id think twice about staying with Adidas

Larry Brown had KU in Pumas for a year or two. I think his first Final Four team at KU was wearing Puma.

You, sir, have a helluva memory. 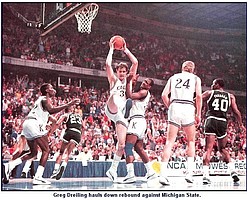 KU's shoe contract with Adidas is about as much as Puma is paying Marvin Bagley. It's not a riidiculous suggestion. How many "views" is Bagley going to get this year compared to KU?

Puma's the jam, and we wouldn't end up with boring, unoriginal designs that are the same as all the other Adidas (or Nike or UA) schools.

If KU cares anything about optics, they will not sign that contract. If they do sign, the headlines will write themselves.

Hey Mike, why dont you cough up a million or two to help defray the loss of the Adidas contract. Don't you think if Adidas was doing it Nike, etc. were also doing it. Shall we get our equipment and uniforms fro Peking?

Spare us your pretense of being a concerned objective observer. Your shallow thinly veiled sarcasm gives you away. You are clearly very disappointed in today's verdict, and that disappointment stems from personal reasons. You had dreams of being the point man on a beat where you could gradually expose emerging details of a great scandal for months and years to come. Sorry for the disappointment.

No need for a conspiracy. The bottom line - way too much money floating around college athletics. Has been for decades. NCAA decision and/or reprimand - don't be so obvious!

Lawrence Journal World is Owned by Ogden Newspapers, Inc. Corporate Headquarters is in Wheeling, West Virginia! I have a "Wheeling Feeling" that Tom Keegan gets his "Marching Orders" from WVU Mountaineers (Just Kidding).

I love this line, "I for one would hate to see any of these fine, upstanding men get beaten out of a cent for all they do for youngsters." The real villain here is DeSousa's 30-something year old professional "guardian."

I agree that this is not good journalism. The jury rendered a verdict based on evidence. Coach Self has made a clear statement. The evidence is that KU didn't know, which is apparently a disappointment to Mr. Keegan. It did t disappoint me.

KU will decide if an ongoing relationship with Adidas is in the best business interest of KU, given all the facts. I am happy for them to decide that and not the LJW sports editor.