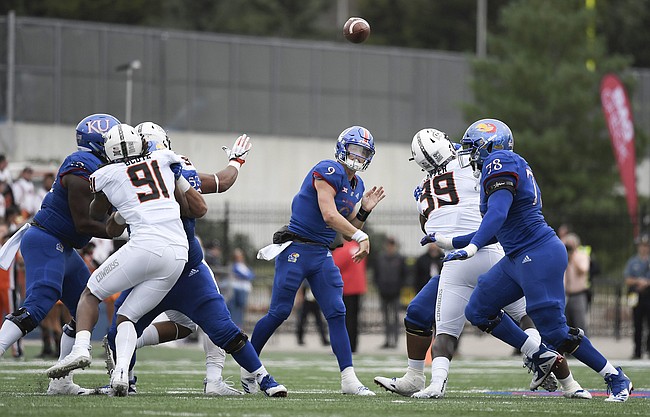 If you found watching Kansas football on television even more excruciating than usual Saturday, consider how lucky you were compared to redshirt junior quarterback Carter Stanley.

He had to fly all the way to Lubbock to watch it in person. At least you had the option of changing the channel. He was forced to pay attention.

Not only that, he had to watch Peyton Bender, his friend and teammate, suffer through one of the rougher games of his career (18 of 41, 5.4 yards per pass attempt). Stanley had to wonder if the ringer on the bullpen phone had gone dead.

He’s done a good job of keeping his focus trained on the right things and seemingly doesn’t get sidetracked by excessive thoughts of why he gets such a short leash. Still, he’s only human. It has to be keeping him awake at night, or at the very least has him checking his breath and the effectiveness of his deodorant.

Might he snore on the team plane? Could it be he reclines his chair all the way back on the team flight. If so, then I understand, and I wouldn’t play him either. What is with people who do that? Do they think others want to study the backs of their heads?

Anyway, it’s not that Beaty has it in for quarterbacks who played high school football in Florida. Bender played in Fort Lauderdale, Stanley two hours to the north in Vero Beach.

It can’t be that Bender throws better passes in practice than Stanley. Mobility isn’t a factor in practice because the pass rushers aren’t allowed to rock the quarterback. No coach is going to ignore game performance in favor of practice play.

In Beaty’s four seasons on the job, no quarterback had a game as effective as the one Stanley produced in a 48-28 loss to Oklahoma State. He completed 24 of 32 passes for 247 yards, threw three touchdown passes and did not throw a pick. The 28 points stand as second-most in a Big 12 game under Beaty (behind 34 vs. West Virginia in 22-point loss last season), who has a 1-30 record in conference games.

The very next week, Stanley gave way to Bender after throwing just four passes. It’s so weird it creates suspicion that it’s personal.

Beaty is one game into his second stint as self-appointed offensive coordinator and his return to multitasking was a predictable mess. The best stat: KU scored three points out of two turnovers inside the 10 gifted by the defense in the 48-16 loss to Texas Tech.

The Kansas defense leads the nation in turnovers with 21 and KU is tied for first with Georgia Southern with an average of +2.0 in turnover margin. Of the 11 schools with a turnover margin of higher than +1.0, Kansas (2-5) is the only one with a losing record. The record of the other 10 schools combined is 62-12, which tells you it's hard to lose when you consistently win the turnover battle, except for Kansas.

Give Beaty credit for one thing: He used Alabama transfer wide receiver Daylon Charlot, who made a spectacular one-handed catch on a 44-yard throw and led the Jayhawks with 67 receiving yards, instead of leaving one of the team’s most talented players on the bench, where he has spent most of his two seasons at KU.

But don’t credit Beaty with being conniving enough to fire Meacham as a means of insulating himself from a midseason canning. If Beaty is fired, that theory goes, nobody is left to coordinate the offense.

Garrett Riley, assistant coach in charge of tight ends and fullbacks a year after serving as quarterbacks coach is Oklahoma head coach Lincoln Riley’s younger brother. Unless he’s the football version of Jerry Van Dyke, Billy Carter or Roger Clinton, he couldn't do any worse than what we saw Saturday.

For now, Beaty controls the team, the offense and the quarterbacks and will put in long hours this week in hopes of improving his 3 percent mark in Big 12 games.

Plus mine. Ticket that is.

Tom - if Beaty didn’t fire Meacham to insulate himself from a mid season termination, then why did he do it ?

What do you know that most of us probably don’t know ?

I could be wrong, but I think the theory holds true to a certain degree. It may not be the main reason, but you have to think it crossed Beaty’s mind before he officially made the decision to can him.

I too grow tired of a coach that doesn't give his best game day quarterback the reins to the offense. It did look suspicious that the head coach yanks Carter after 2 series in which the play calling sucked. In addition, the coach said something to the effect, "now let's see if he can do it again to prove it wasn't a fluke." What coach says that? I'm sure that didn't instill confidence in Carter to hear his coach say that. Our only consolation is that Beaty has sealed his doom by sticking with Bender, who lacks mental toughness and can't scramble to save his soul. I say let Carter play the rest of the games.

Nothing makes sense anymore in the ninth year of the Decade of Despair.

Because Beaty is an idiot. I was really hoping to wake up today and find out Beaty had been fired. What are they waiting on? He's clearly a dead man walking. AD Long is just pissing people off.

Quote of the year!

Beaty is a moron. When he was hired, I thought it was a huge mistake because of his lack of successful experience as an OC, DC or HC. His only experience as an OC was so bad at Rice that he was fired after one year. I thought his only chance was hiring some amazing coordinators, and leaning on them heavily to overcome his own short comings.

I think he has deferred to Bowen on the defensive side of the ball, but it looks like he keeps overriding the judgment of his more experienced offensive coaches. Beaty keeps hiring assistants with much more coaching experience than he has, and then cutting them off at the knees with his own poor judgement.

Beaty is a great cheerleader, but he is an absolutely horrible football coach. He has demonstrated a complete inability to evaluate talent, make correct game time decisions or call plays. A good head coach should be the smartest guy in the room. He should be a guy who his coaches look to for their own development, but I get the feeling that Beaty's assistants probably avoid him so it doesn't make their jobs more difficult than it needs to be.

Remember that last year, he agreed to a running clock against TCU... think about that for a second. The Big 12 had to intervene - preventing him from throwing in the towel. This is the guy who runs the program. It is not the off-season hype man... it is the guy who requires intervention to save him from himself.

Long knows he is a lost cause, or he would have intervened himself by now. If he wanted to save Beaty, he would have prevented the Meachum firing because of the optics.

Can anyone explain to me why firing Beaty and letting Bowen finish the season with Riley as OC is a bad idea? We will get to see a little bit of what Riley can potentially do, we know that Bowen is better than Beaty (even if he isn't the future of the program), and we can focus on finding a new identity. This is just so sad. They had the ball inside the 10 yard line three times this week and only got three points. I love KU football, but I can't even consider blocking out time to watch this disaster.

Are tickets going for ten bucks a pop at HyVee yet?

Unfortunately, the ONLY thing I enjoy about KU football now is Mr. Keegan's columns. His columns are always spot on. Keep up the good work. Someday, this nightmare will end.

Crickets....from Jef Long's office. Wonder when is it that he begins working on his vow to "break the cycle" of losing football?

Spot on TK! One can only imagine what Carter Stanley would've evolved into had he been given the reins after his freshman season. The worst case is he would've stagnated as has every other quarterback Beaty (and Weis) recruited.

I was convinced that Long had a coach waiting in the wings (e.g. Les Miles or similar) and Beaty's termination would be announced after this past weekend. This just increases the concern that Long doesn't have that connection and who in the world would take over the mess the program is in now?

The recruiting time clock is ticking and the if things remain status quo for the rest of the season it's going to be a bleak recruiting outcome. If the Adidas mess comes to fruition, we'll all be watching 10:00 p.m. games against Mountain West opponents. Good thing is, we won't have to deal with 11:00 a.m. kickoffs every week!

If we throw enough money at a head coach we can get most anyone. It's just a matter of how much we're willing to spend. If you have a damn good coach he will get players to come play for him. I don't understand the hesitation in firing Beaty either but perhaps there is reason for it. If it doesn't happen by November 1st we are going to be behind the 8 ball in both recruiting and the head coaching search. Now it we are already negotiating with a new head coach ie Miles then maybe I see holding out a bit longer to avoid paying an interim coach unnecessarily or perhaps we just haven't hammered out the deal and are waiting to do so until we announce. I can see that as the more likely option as Long is gonna wanna make a splash with a new HC. Only time will tell either way Beaty is done after this season.

"Unless he’s the football version of Jerry Van Dyke, Billy Carter or Roger Clinton, he couldn't do any worse than what we saw Saturday."

Great article, Tom, but that's the only line I disagree with; even if he WAS the football version of one of those guys, he STILL couldn't do any worse than what we saw on Saturday.

Lord knows why I still watch this disaster. There's obviously some part of me that's a huge masochist. (I play golf too, so clearly that's the case.)

And BTW, I'm still waiting to hear from the Beaty defenders. Common, guys, all year you've been lecturing us "haters" on how we should be more patient, as well as saying a bunch of other nonsensical things. Where are you? The clock is ticking ...

God help us if Beaty is retained for next year. If he is, I have to believe that Stanley would (and SHOULD) transfer. What a waste of a college career.

This year has been such a waste. 2 years ago I spent a couple of hours researching coaches taking over disasters, and all successful reclamation projects showed at least some improvement in the 2nd year. It shows the players are listening to the coach and that they are getting organized. Nothing like that here. The idea that Beaty needed 4 years or more is outrageous given the state of the program last year. Most of us knew he had to go. Now we have almost no recruits coming next year. Adidas is giving us platinum service even with a crappy football program, so there is no incentive to improve.