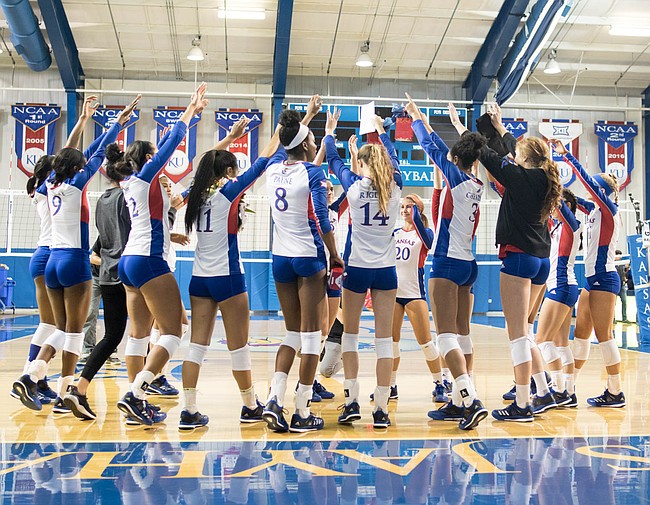 The Kansas volleyball team breaks its huddle after a five-set loss to West Virginia on Saturday, Nov. 25, 2017 at Horejsi Family Athletics Center.

Over the past month, No. 22-ranked Kansas leaned on its defense to rattle off nine-straight victories.

"We have been pretty joyful for the last month," head coach Ray Bechard said in a team release. "Now when you stub your toe, you see if the group wants to stay together and support each other - we will. Obviously, no one is going to go through this league undefeated because everyone has at least one loss now."

The Jayhawks played from behind in every set, trailing by at least four points in each. In the third set, with the match tied 1-1, KU led 19-18 before K-State finished on a 7-2 run to take a 2-1 lead in the match. Junior outside hitter Jada Burse led the Jayhawks with a match-high 17 kills, which was her 14th double-digit kill total on the season.

K-State finished with five players recording double-digit kills, while scoring 10 service aces as a team. It was the highest total against the Jayhawks this season.