Reeb supervises a staff of seven human resources, payroll and administrative professionals for Kansas Athletics and is responsible for all human resources functions, including employment and recruiting, payroll, compensation and benefits, retirement plans, employee relations, and a Human Resources Information System. 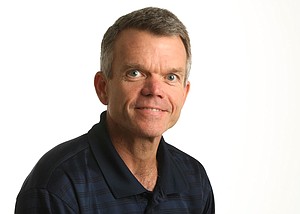 Reeb joined Kansas Athletics after serving eight years as the director of administrative services and city clerk for the City of Lawrence. He also worked previously in the Johnson County government, and served as a staff attorney for the Kansas Department of Revenue.

Reeb earned his bachelor's degree from KU and his juris doctorate from the University of Kansas School of Law.

I must say this doesn't seem like the priority at the moment. We have a football program hemorrhaging coaches and recruits and somehow we think the priority is to rename the position HR Director to Assistant Athletic Director - HR.

I'm hoping this guy knows how to sharply reduce a payout to an overpaid coach.

... and to deal with the possible legal issues in the basketball department!

Thanks for giving me a little bit of a chuckle today...Long was brought in for one program, not any others. He might have to address the others, but he was hired from football focused programs to help KU focus some attention on the issue. I realize that there is some drama in the Athletic Office, but his priority is football.

FOR THE LOVE OF GOD WILL YOU PLEASE FIRE YOUR FOOTBALL COACH ALREADY AND HIRE A "REAL" COACH LIKE LES MILES TOMORROW.

THERE IS PLENTY OF TIME TO DEAL WITH THE OVERALL DEPARTMENT. WE ARE LOSING RECRUITS AND POTENTIAL RECRUITS BY THE DAY WITH THIS DELAY OF THE INEVITABLE!

GNAW THE PROGRAM'S LEG OFF ALREADY TO GET OUT OF THE BEAR TRAP! THE LEG WON"T LOOK OR SMELL ANY BETTER TOMORROW.