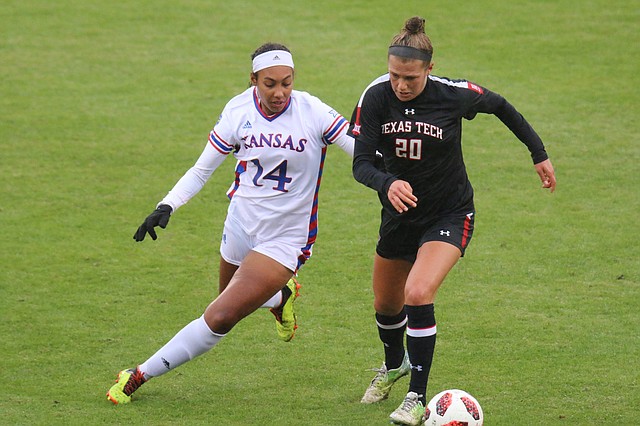 “I don’t think there was anything (Sarah) could have done about it,” coach Mark Francis said.

The score helped Texas Tech finish off a 2-1 overtime victory over Kansas (11-3-2, 5-2-0 Big 12) Sunday afternoon at Rock Chalk Park. The Jayhawks could have moved into a three way tie for first place in the Big 12 with a victory.

It was so windy, defender Addisyn Merrick’s headband flew right off in the 70th minute as she went for a header at midfield. It even stayed on the field, soiled in rain and mud, for the remainder of the game.

Shooting with the wind in the first half, Grace Hagan launched an early shot that deflected off the hands of Texas Tech goalkeeper Marissa Zucchetto and up above the goal. It drew two straight corner kicks for Kansas, both of which it couldn't score on.

Zucchetto tallied three saves in the first half, finishing with six on the Jayhawks' 19 shots.

Kansas’ front line attempted to take advantage of a wind-aided field, but with every shot it took, the ball would deflect out of place right after it was touched.

“The thing you have to remember in a game like this is you’re not the only team that’s having to play in these conditions,” Hagan said after the game. “I think us, more than them, would be more used to weather like this.”

Electing to not try and cross the ball, Elise Reina sent a pass on the ground to senior forward Grace Hagan. With lots of pressure in the box, Hagan found the back of the net as the pass drew Zucchetto open. It was Hagan’s sixth goal of the season and Reina’s fourth assist, which leads the team.

With Kansas leading with 13 minutes to go, senior forward Taylor Christie had a good chance of scoring a goal for insurance, isolating the goalkeeper. Her shot was saved by Zucchetto, but she decided to play it short. Christie took advantage with a reshot, and Zucchetto dove while standing in front of the net to make the save.

Texas Tech’s Brooke Denesik drew a free kick with two minutes to go in the game, and found Cassie Hiatt for a goal with less than two minutes on the clock, sending the match into extra time. It was the second free kick goal that Kansas allowed this season.

“There wasn’t a lot of things that we didn’t do well today, except defend a set piece which is what got them back in the game,” Francis said. “(That’s) something we struggle with a little bit at times, the kid had a free header, and now it’s one-one.”

Winning possession to start overtime, Merrick tried to break up a pass from Tech’s Jade King. The ball took an unlucky bounce toward the net off of Merrick’s shoe, and though Peters had that part of the net covered, she couldn’t get to it in time.

“When the conditions are like that, things like that can happen,” Francis said. “It was going far post and deflected off of (Addisyn), nobody's fault, nothing that (Addisyn) did wrong, or Sarah did wrong, with the conditions it moved pretty quick and went inside the near post.”

Kansas will travel to to face No. 20 Texas at 7 p.m. Friday. Each of Kansas' final three opponents are currently ranked in the top 25.

“We got to bounce back, and we will,” Francis said. “This group is so resilient, and we’ll be very very good on Friday, I guarantee.”