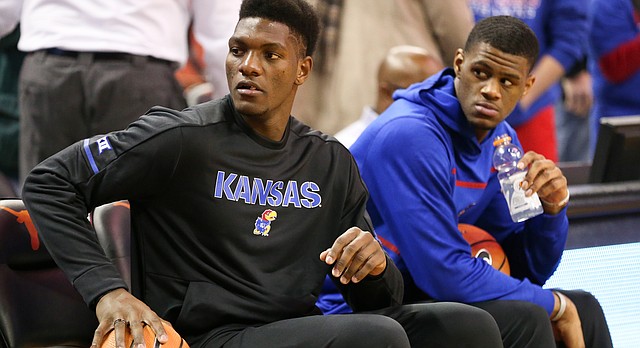 A trial aiming to tackle major college basketball corruption has begun to detail how the families of two players received cash payments for them to attend the University of Kansas, according to multiple reporters covering the trial.

Former Adidas consultant TJ Gassnola testified Thursday morning at the federal trial in New York City that he made multiple payments, totaling $90,000, to former KU basketball player Billy Preston’s mother, Nicole Player, for him to attend KU, according to a report from CBS Sports’ Matt Norlander. Gassnola said he first paid her $30,000 in a New York City hotel room and then paid her $20,000 in a Las Vegas hotel room.

Business manager Christian Dawkins, former amateur coach Merl Code and former Adidas executive Jim Gatto have pleaded not guilty to defrauding various colleges by concealing the use of under-the-table payments of up to $100,000 from Adidas in exchange for commitments to programs that were seen as a path to big NBA paydays. Their lawyers haven't disputed payments were arranged in violation of NCAA rules, but they argue the schools never suffered any harm.

Gassnola, 46, a former Adidas consultant who pleaded guilty to wire fraud charges in March, continued to drop some notable names in basketball, including KU coaches and players, during his second day on the witness stand.

Gassnola and Gatto were “ambassadors” to KU for the 2016 Late Night in the Phog, when Preston was in attendance for a recruiting visit. Gassnola told Player he wanted to be the only person paying the family and he heard they were being paid by “outside entities,” Norlander reported.

When Preston’s eligibility came into question after he wrecked a car at the beginning of the 2017-18 season, Player said the car belonged to his grandmother, which KU believed, Norlander reported.

Gassnola testified that Player asked him to tell KU attorneys that he did not give money to the family, according to an ESPN report. He said his lawyers sent a letter to the university's lawyers denying any payments, a statement he said was not true during the trial on Thursday.

KU then found the money transfers from Gassnola to Player, according to a report from the trial by Yahoo Sports’ Dan Wetzel.

Gassnola testified that Player told him she would tell KU investigators that she was in a romantic relationship with him, which would make the transfer of money “OK,” Norlander reported.

Texts between Player and Preston show her giving her son directions on how to disrupt KU's investigation into the payments if they asked him about Gassnola, according to Norlander.

Preston never played an official game at KU, and eventually left the program during the season while the university and NCAA were continuing to look into his eligibility. He now plays professional basketball for the NBA’s Cleveland Cavaliers organization.

Gassnola meant to pay $20,000 to Falmagne to get De Sousa out of the $60,000 deal with a Maryland booster, but he never made the payment because the FBI made its investigation public, according to reports from Norlander and ESPN’s Jeff Borzello.

Gassnola testified that he recruited De Sousa to play for KU but never made the $20,000 payment, according to Norlander. The relationship between De Sousa and KU began when KU assistant basketball coach Kurtis Townsend asked Gassnola to connect Falmagne to Adidas, as Falmagne was looking to get Adidas gear for the Angolan National Team, Norlander reported.

Gassnola said he had a “brief” conversation with KU basketball coach Bill Self about the relationship, but said he never told Self or Townsend about the payment, Norlander reported.

On Wednesday, Self said he would not comment on the trial until it ends.

“I can’t talk about that,” Self said Wednesday. “And I’m not meaning to be opaque about this at all. I just feel that our stance is still the same. We’ll comment when the time’s appropriate. And the appropriate time is when this is done.”

Gassnola also said that while working under the direction of Gatto, he paid out $15,000 in cash in 2015 to try to lure DeAndre Ayton to an Adidas school only to see him sign with Nike-sponsored Arizona. Ayton attended Arizona for his freshman season before being drafted by the Phoenix Suns.

Gassnola tried to secure a permanent housing and a full-time job in Kansas for Ayton’s mother to get him to attend KU to play basketball, according to Norlander.

Gassnola said he felt he let Self down in his failed “outside recruitment” of Ayton, according to Norlander.

Gassnola also testified he made a secret $40,000 payment to the inner circle of North Carolina State recruit Dennis Smith Jr. through an assistant coach at the school.

He told a jury he delivered the money in cash to the coach, Orlando Early, on a trip to Raleigh, North Carolina, in 2015. He said the coach told him he was going to give it to a personal trainer for Smith, a highly touted point guard, as way to get it to Smith's family.

Asked Thursday about the testimony about North Carolina State, Athletic Director Debbie Yow said in statement, "If any former employee was involved, they knew they were breaking the rules and chose to keep it hidden."

Early did not respond to a text message from the AP on Thursday. North Carolina State announced in 2017 that both he and head coach Mark Gottfried were leaving the program months before the corruption case became public.

Smith played one year at NC State. He's now in the NBA playing for the Dallas Mavericks.

Gassnola also described how he texted then-Louisville head coach Rick Pitino in a panic in September 2017 when he learned there was an investigation into the payments made to several players, including Louisville recruit Brian Bowen Jr.

"I was just looking for information, and I instinctively reached out to him," the witness said.

There's no evidence that Pitino responded to the text. The legendary coach was never accused of a crime but was fired amid the fallout.

— Journal-World reporter Dylan Lysen and The Associated Press contributed to this report.