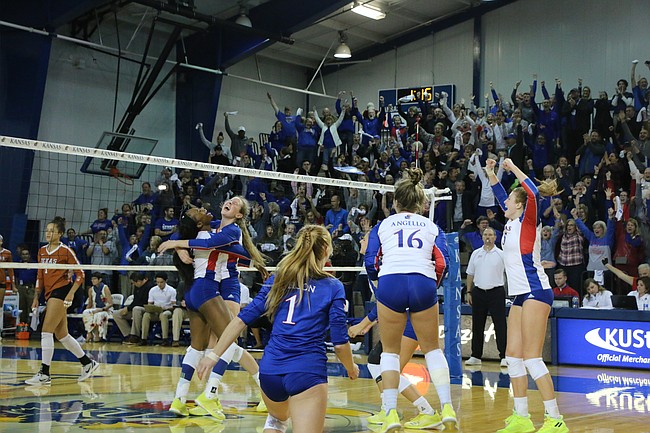 Texas volleyball coach Jerritt Elliott could only distance himself farther from the net as the match went on, shaking his head in disbelief throughout the night.

“I’ve been waiting for this day my whole life. I’ve always wanted to play Texas from day one. This is just the cherry on top for me,” right side and setter Gabby Simpson said. 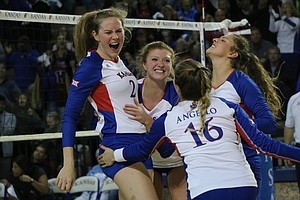 The Jayhawks celebrate a point during the fourth set in their four-set upset over No. 4 Longhorns Wednesday Oct. 10, 2018.

For the first time in conference play, the Jayhawks won the opening set. Targeting libero Sydney Peterson, Kansas jumped out to a six-point lead following a pair of aces by Simpson, and she’d finish the match with two more.

With Allie Nelson playing in the center of the back row, setter Ashley Shook moved into the center of the net to try and force Nelson to dig it out. The plan left outside hitter Jada Burse wide open on the pin, striking five crucial kills in the first set. Burse delivered the game-winning kill, finishing with a team-high 22.

Elliott tried to respond to Burse’s success with a substitution at the setter position, taking out Shook for freshman Jhenna Gabriel, who hadn’t played much prior to Wednesday’s match.

Still, the Jayhawks clinched the set by recording a 25-13 advantage in digs against the Longhorns.

Shook returned to the match in the second set, but Kansas still found a way to score. With Simpson playing in the back row for most of the match, Kansas scored off blocking miscues from Shook, Gabriel and Logan Eggleston.

“(We) salvaged the second set. That would have been rough to come back from that emotionally,” coach Ray Bechard said. 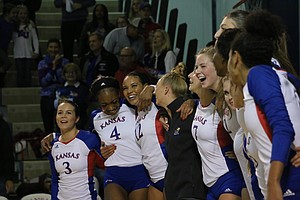 The University of Kansas volleyball team dances to the alma mater after upsetting No. 4 Texas in four sets Wednesday, Oct. 10, 2018.

Texas rallied back from a six-point deficit to force extra points, but Kansas ultimately secured the win to take a 2-0 advantage.

The Jayhawks were not as efficient saving points off digs in the third set, giving the Longhorns a set point with a 25-20 win during a set that had nine ties and six lead changes. Texas closed the third set and opened the fourth on a 14-3 run, but it wouldn’t be enough in the end.

Bechard called timeout with the Jayhawks at 23 all. The team was left with two choices: Drop the fourth set and see what happens in the fifth set, or take the match with the next two points.

“We were tired of the third-set lulls,” Simpson said. “This is Texas, we have to do good.”

Kansas didn’t do good, they did the unthinkable. After reaching set point off a service error by the Longhorns, which was their 11th of the match, Burse sent a ball that landed past the Longhorns' block and ensued one electric celebration.

“I told myself, I don’t even know what happened, it feels great,” Burse said.

Ochai Agbaji, who is a freshman on the University of Kansas men’s basketball team, didn’t know what color he was going to wear in Horejsi Family Athletics Center for the volleyball match.

His sister, Orie, entered the court in the second set against the Jayhawks. Growing up in a house dominated by volleyball and basketball, Ochai says his family visits pretty frequently, which was a big part of the reason he chose Kansas.

Despite that, he’s been a fan of his sister’s school for the two years she was there.

“Going there in the past and seeing all that they hold there, it’s a great school,” Ochai said.

Ochai had interest from the Longhorns, but never got the offer. He chose Kansas over interest from Oregon, Nebraska and Oklahoma State.

Great win! And, this team will keep getting better as the season progresses. Congratulations, Jayhawks!

Love the vball coverage! Any chance you can put records for both total and conference...both teams? Love a one stop shop article!

Great to see the elite level continue after the graduation of the seniors last year. Looking forward to more great wins.

Last year the team started out so good, then something happened with chemistry. This team however seems to be building as a team. Only one senior?

There was an injury to our 6 rotation player as well -- that hurt down the stretch.