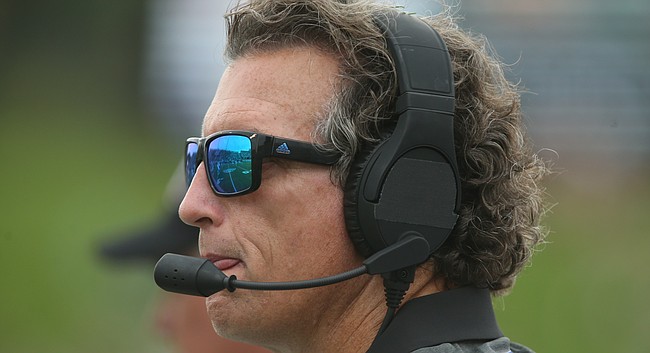 Beaty said he will handle in-game play-calling and will coach quarterbacks, duties Meacham handled for the first half of a 2-4 season.

Meacham was hired as offensive coordinator before the 2017 season.

“None of us are satisfied with the progress we are making on the offensive side of the ball,” Beaty said. “We hope that with this change we are better able to put our players in the best position to be successful.”

Statistically, this has been KU’s best offense under Beaty.

In a 48-28 loss to Oklahoma State, the season’s fifth opponent, KU had its second-highest scoring output in a Big 12 game under Beaty, ranking behind only the 34 points Kansas scored in a 22-point home loss to West Virginia in last season’s Big 12 opener.

Meacham was not quoted in the release and did not respond to a text requesting comment from the Journal-World.

This is the second time Beaty has taken over as OC and quarterbacks coach.

Beaty has shuffled quarterbacks the way he does assistant coaches during his time at Kansas.

A look at the various coaches instructing Stanley since he came to KU from Vero Beach High in Florida demonstrates the instability of Beaty’s staff.

The position coaches for the receivers Stanley targets: Klint Kubiak, Jason Phillips, Meacham, Justin “Juice” Johnson. Phillips started his lone season in the program in charge of punt returns until Beaty announced at a weekly press conference that he had taken over those duties, to go along with his head coach and offensive coordinator titles.

During Saturday’s 38-22 loss to West Virginia in Morgantown, television cameras captured Beaty grabbing a headset from a colleague when his didn’t work and passionately chewing out somebody watching from upstairs, Meacham’s vantage point during games this season after spending last year on the sideline.

Beaty does not hold his weekly press conference during bye week and has been unavailable to answer whether Meacham was on the other end of his eruption.

His contract includes a $3 million buyout if he is terminated without cause.

Interesting that Long doesn't believe in firing coaches in the middle of a season, but Beaty apparently has no problem with it.

Lol. Wtf? I mean seriously. We hire Jeff Long and think maybe we're finally going to get over the circus that has become KU football and all AD Long does is grab a bullhorn and start selling tickets to this s-show?

What a disaster. Sad that this is what KU athletics has become.

Why do you think I root for Iowa in football now?

You know Bryce your like the guy who breaks up with his girlfriend, but then proceeds to tell her how he's better off without her. Always follows her on Facebook after the breakup and then let's her know when he has a new girlfriend. It's sad, infantile and a totally DB move. You moved on, so move on, no one needs or cares about your IOWA updates. If you root for Iowa why are you continuously here? God you are so sad. Joke. Like the said, just like the DB boyfriend who breaks up but still has to keep tabs on the ex. Go be a big boy now.

Kevin, I started to reply to "Bandwagon Bryce" but then I read your response and it was already perfect. Kudos.

Because Bryce, you are not smart enough to pick a good football team.

You go awol on the Jayhawks and your search for a replacement takes you to the hotbed of college football, the state of Iowa. The hawkeyes are barely the best team in their own state beating out powerhouses Iowa State and Northern Iowa.

Thinking Long had nothing to do with this is comical. It’s simply another step in the process. At this point, we have to trust it.

No, we don't have to trust anything having to do with KU football. It hasn't earned our trust and Beaty certainly hasn't earned it.

I believe he meant trust Long with his process. One step at a time dude. You can't eat an elephant in one bite.

This is mind boggling!

Let me guess, this will really help. Yeah like it's Meacham's fault that this team has no talent or offensive line. We've seen this before with Beaty he fired the his first offensive coordinator and made him a walk around guy. Then Beatys offense was worse under Beaty. What a clown, just watch after the bye week the offense will still be horrible. Let me ask this, if firing a head coach every few years is not productive to a team, how is firing coaches during the season productive? Beaty can't decide on a qb so he fired the oc? AND BOWEN STILL HAS HIS JOB?! How many wide open receivers do we have to see? Beaty won't be able to get a high school job after this. Guaranteed Meecham gets another job after this and we will all see who's at fault after this. Just go already David.

Beaty gets his 3 mil (gag) so what does he care?

Isn't the $3MM Meacham's buyout? Beaty's buyout is more than $3MM. He is guaranteed two years salary, which is $3.4 MM I believe now.

It seems like Beaty wasn't doing so good, I know there are a lot of other factors, but it is clear there basically hasn't been too much improvement in the offense, but it seems like Meacham had better games. Again I realize that this isn't perfect, just was seeing if there was improvement, and generally under Meacham we were better than the other two offensive coordinators (not much).

Meacham must have laughed when Beaty yelled at him, or maybe Meacham wasn't supportive of Kendrick or Bender being the QB next game and Beaty didn't want any of it.

It's clearly not a performance issue else Bowen would have been gone years ago...not being in the top 120 in any of the past 5 years gives you a hint at how bad his performance is.

Beaty handled this as well as he handles his timeouts.During the bye week so he doesn't have to talk to reporters and explain himself. This guy is all cl(ass).

Desperate times call for desperate measures. Beaty is out of lifelines, so he clearly doing what he thinks best to salvage the season. Make no mistake, Long had to be in agreement to make this change. As the saying goes “You are only as good as the people who work under you”. The best thing Beaty did two seasons ago was fire himself as the offensive coordinator. Unfortunately the offense has not measured up to Big 12 standards under Meacham. 7 points on 4 turnovers was a very poor performance against VWU. Whether it is the quality of Jimmy’s and the Joe’s and/or the coaching, Beaty has to win at all cost. Hopefully his second stint as the offensive coordinator will be better, but only time will tell.

Andy, what do you mean by 7 points and 4 turnovers against VWU?

I believe he meant that WV turned it over four times, and we turned those four turnovers into 7 points.

Laughing stock of B12.

All you idiots on Bowen's back! Snyder would hire him in a second and would help K-State football and hurt KU football.

Breaking it down the defense statistically ranks in the top ten in the country in four categories and number 1 in one of them. Unfortunately offense ranks in the bottom categories of everything except turnovers.

You really think Bowen would help the KState defense? We are avg around 32 ppg that our D is giving up.. I don't think he would impact KState whatsoever. I know he is a legacy and all, and our D is improving some, but not anywhere close to where it needs to be. Our secondary continues to get smoked each game, can't we shuffle some kids around? I mean, what do we have to lose at this point?

Don't Forget that Beaty still has his "Secret Weapon" Garrett Riley, who has helped Guide David in the Past. Riley was QB Coach last year, but then demoted to "Tight Ends / Fullbacks" Coach this year.

Beaty is "Captain of the Ship" for the KU Offense! Will Carter Stanley be Benched? Will Daylon Charlot Start and Finish at WR? Will #33 Ryan Schadler be Utilized?

What has Beaty done in 4 years to make anyone think he has a clue in how to run a Big XII team, staff, players...? Not one damn thing.

I think Beaty will be fine. All he needs is some quality assistant coaches to help handle the day to day duties. A few quality players would help as well. If it doesn't work out for him, I hear Wichita State is looking for a football coach. They have just as good of talent as KU and he can hire all new assistant coaches.

When why hasn’t he hired them?

Beaty’s thought, “If we lose out Meachum and I are fired along with everyone else. If I fire Meachum and win a game or two, I probably save my job.”

Beatty may have done Meach a favor… Letting him go now allows him to take a little break, then hit the career search next before the KU Football blood bathe commences!!

There is cause to fire him...it's beCAUSE he's an idiot.

The defense is the clearly the strength of this team right now. We didn't need a great offense to beat WV, we just needed one that could have taken advantage of the turnovers and get scores. 2 TDs, 2 FGs, and we win that game.

With the talent we have, a GOOD OC would have us scoring more points. I’m completely fine with letting Meacham go. Not saying we do better, but I don’t think we can do a whole lot worse. When Beaty was doing the OC gig, he had less talent and didn’t have the extra hire that Long put in place to help take care of some football ankle biters. I’m not sure where WV, Ok State, and Baylor rank on the defensive end in the Big XII. I’m afraid the best defenses still await us, so if we don’t score as many points, the Beaty haters won’t take that into consideration, they will continue to blast away. I’m wondering how many years after he is gone will they continue to bash him. Glad I don’t have that kind of hate in my heart.