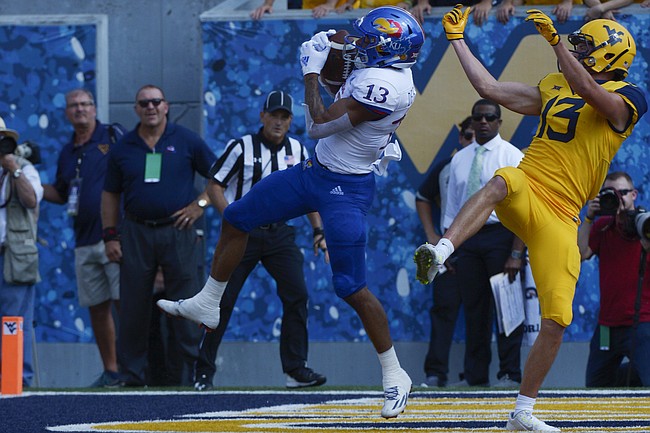 After the Kansas football offense went four-and-out on its first series and followed that up with a three-and-out and a Stanley interception, the Jayhawks’ first in 2018, David Beaty replaced the redshirt junior with former starter Peyton Bender with more than 47 minutes left in what turned out to be a 38-22 loss at No. 9 West Virginia.

“We went through a number of plays there early, and there were some things that we saw that we felt like he would benefit us by putting him in there,” Beaty explained of the switching to Bender, which came after KU netted two total yards combined on its first three possessions.

Asked whether some mistakes by Stanley — he also fumbled an exchange with freshman running back Pooka Williams on a 4th-and-1 call on the first series —led to Bender’s early appearance, too, Beaty said the coaches identified “some things up front” that kept the offense from succeeding.

“But that’s the good thing about having more than one (QB),” Beaty added. “When a guy isn’t playing well, you have another one.”

Bender didn’t think he would be joining the fray quite so early at WVU.

“I try to prepare like I’m going to get reps every week. I figured I might play at some point during the game, didn’t know when. But came a little bit earlier than I thought. Not exactly sure as to why,” said Bender, whose 16-for-25 passing day led to 191 yards, two touchdowns and his first interception of the year.

Stanley, who only returned to the field briefly in the second and fourth quarters, finished with 15 yards passing, completing five of his eight throws.

He found out just before Bender took over in the first quarter that he was being replaced.

According to Beaty, it was “really good” to see Bender “ready to go” when KU asked him to replace Stanley.

“Both of those guys have done a good job of preparing and not letting necessarily the noise bother them,” Beaty said. “They’ve been getting ready to go. We’ve got to, have to, find a way to get those guys to drive us all the way to the end zone. That’s what quarterbacks do, and we have to finish that way.”

Though he was expected to miss the game at WVU on Saturday, sophomore quarterback Miles Kendrick made the trip, warmed up before the game and was considered available to play against the Mountaineers.

Kendrick, who injured a shoulder two weeks ago in the second half of KU’s loss at Baylor, did not suit up in a Sept. 29 loss to Oklahoma State.

However, Kendrick spent most of the afternoon wearing a headset and communicating with coaches and teammates. He did not check into the game.

For the third consecutive week, as expected, the KU secondary played without sophomore safety Ricky Thomas, a starter each of the first three games.

KU’s depth at defensive back suffered another significant blow, too, at WVU when junior safety Mike Lee was kept out for an undisclosed injury.

Juniors Jeremiah McCullough and Hasan Defense started in the absence of Lee and Thomas.

Defense picked off WVU star QB Will Grier twice in the end zone, returning his second pick for a career-best 60 yards. The former starting cornerback also made seven total tackles and broke up another pass. McCullough, in his first career start, contributed eight total tackles.

The KU offense, meanwhile, played without two receivers — sophomore Quan Hampton and junior Evan Fairs — both out due to injury.

Getting back to takeaways

Though the plays didn’t lead to a victory, the KU defense took the ball away from the Mountaineers on four occasions, marking the third time this season the Jayhawks created four or more turnovers.

Defense's two-interception showing was the first for a Jayhawk since Brandon Stewart grabbed two against TCU, in 2016.

Sophomore safety Davon Ferguson recorded his first career interception on WVU's goal line. With his pick, Kansas now has 10 different players with an interception this season.

Texas Tech after the bye… Bring 'em on, we're going to take it to them in the air in Lubbock! Everyone's going to score, Pooka, Sims 300 yard games. Will be a blast to watch

Why? Panic, confusion, fear...pick your poison.

I don't think they scout the opponent.

I'll say this, with the exception of Turner Gill's 2nd game as a Jayhawk HC, it seems like your statement holds true (on the offensive side of the ball). Gill being an ole option QB probably was the main factor in defending GT triple option offense.

Beaty speaks but says nothing. It has been this way for a considerable period of time. Fans continue to suffer during the Decade of Despair.

He is the king of meaningless chatter. I chuckle when he begins his statements with "Well I do know this…." It gets me every time! I bet he stays on the rest of the season

Why even have a qb competition I camp, when asked who will start just say all of them. Because that's what happens after the season starts. Carter 300 yards, Beaty says I'll watch the film. Carter has a few 3 and outs, Bender comes in. Bender gets team in red zone Kendricks comes in. This offense will never gel like this. This was a winnable game yesterday. No offense, gee l wonder why.

I think the 3 QBs should line up in the Pistol formation to start the game, then have the center randomly hike it to one of them. This would prevent even the QBs from knowing who will start.

So the team has two starting safeties out, and they replace them, and the defense plays better.

I loved the last play (not the 2 pt conversion)...the pass went to Charlot and he went after the ball. I don't know what has happened to him, but I have always enjoyed the few moments when he has been on the field.

I like Charlot's mean attitude on the field too. He's a junior this year and if he can get that kind of fight in him for practices and games he might see more PT this season and all of next year, and we're gonna need him.