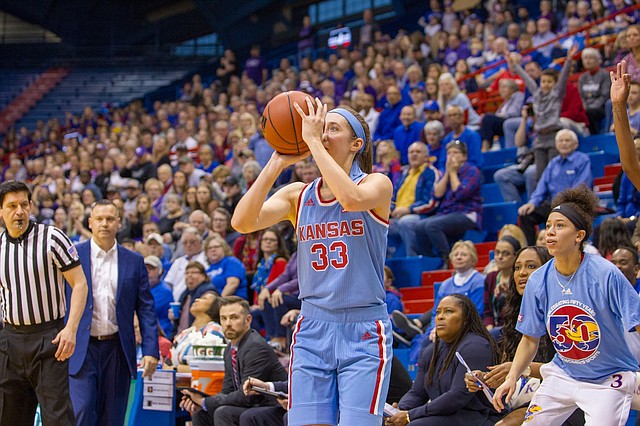 Kansas guard Kylee Kopatich (33) sets up for a 3-pointer late in the fourth quarter Sunday against Kansas State at Allen Fieldhouse.

The Jayhawks used a strong defensive effort to force the Tigers into committing a new season-high 22 turnovers, with 12 of them coming in the first half alone. Kansas capitalized on LSU's mistakes, scoring 26 of its 68 points off of those turnovers.

An energetic defensive effort was supported by an even better offensive performance. Kansas' eight 3-pointers in the first half helped to pull KU ahead of LSU and head into the locker room with a 40-25 advantage at the hald.

Seniors Jessica Washington, Kylee Kopatich and Christalah Lyons all netted double-figure scoring performances for the Jayhawks. Kopatich led the team with 14 points, while Washington and Lyons added 12 and 10 points, respectively.