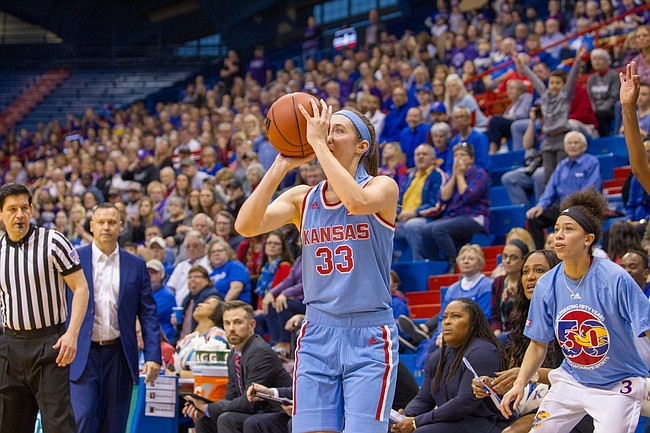 Kansas guard Kylee Kopatich (33) sets up for a 3-pointer late in the fourth quarter Sunday against Kansas State at Allen Fieldhouse.

The Jayhawks used a strong defensive effort to force the Tigers into committing a new season-high 22 turnovers, with 12 of them coming in the first half alone. Kansas capitalized on LSU's mistakes, scoring 26 of its 68 points off of those turnovers.

An energetic defensive effort was supported by an even better offensive performance. Kansas' eight 3-pointers in the first half helped to pull KU ahead of LSU and head into the locker room with a 40-25 advantage at the hald.

Seniors Jessica Washington, Kylee Kopatich and Christalah Lyons all netted double-figure scoring performances for the Jayhawks. Kopatich led the team with 14 points, while Washington and Lyons added 12 and 10 points, respectively.

Firing on all cylinders in the 1st quarter, then playing solidly enough the rest of the way to bring it home. Congratulations on the impressive road win, Jayhawks!

I’m wondering where all the doubters are? The ones that said we would lose. Crickets..... These young ladies still have a ways to go, but they are making progress. Should be an interesting and more competitive year. Congrats ladies. Keep working hard, give 100% on every possession, and good things will happen.

This was an impressive road win but realistically they built a big lead then almost blew it in the second half. Their resume still doesn't have any "signature" wins. When they beat a ranked team or at least some one ranked in the top 50 of the country then maybe the doubters will come around. Their wins this year: UMKC (by 12) Oral Roberts (by 12) Alabama A&M (by 11) George Mason (by 19) IONA (by 31) LSU (by 7) Lets hope they keep it up through the end of the year.

Joe - You criticized them for a lack of top 50 wins but then give no info about the claim. It might be a valid comment but when unsubstantiated it comes across as whining like so many others. I'd imagine that some of the opponents are in the 100's but guessing LSU is higher and definitely good when on the road.

Regardless, hopefully everyone can admit that they have come a long way since the OT exhibition win. There were some pretty crazy comments after that one. Fortunately the sun has continued to rise in the east.

I agree about no “signature wins”. We have not been very good for quite a few years now. Couple that with the fact there are usually 4 or 5 teams in the Big XII alone that are ranked and we play them twice. That has been 10 losses right out of the gate. We need some cupcakes to build some confidence and get out roster to a competitive state. I still don’t think we are there yet, but it’s gaining traction. At Nebraska next, that won’t be easy either. Bill Snyder loaded up on cupcakes in the non conference portion and that goes back to Big XIII days. 4 or 5 cupcakes right outta the shoot. No wonder he made so many bowl games😂😂😂😂

First Miles than the win...I was starting to like LSU, then remembered they were tigers and all hope was lost.