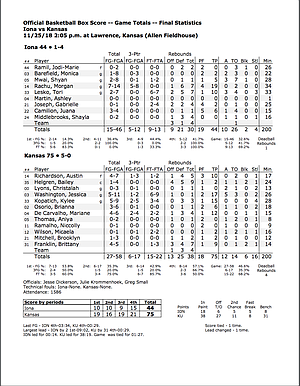 LSU should be a much tougher game. It is good to see all the ladies getting in and developing.

LSU May hand us a loss, but I don’t know of one fan who thought they would go undefeated. I do know of several posters in this side that have such a huge hatred for Schneider that they want KU to lose because their hatred runs deep.

Well I hate Schneider but I want KU to win.

Now that Long has gotten rid of Beaty, Schneider should be next. I've wondered how Schneider took in the firing and whether or not he took stock of his own future and the womens' BB program. Long sounds like he doesn't have any patience for 2nd-rate coaches. We need John Ontjes to take his place.

Joe, Schneider took over a program with not many good recruits. He won a national title. I get it that it was division II. Basketball shows weaknesses more as there are only 5 on the court versus 11 on the field. This is just year 3 and he is getting the recruits needed to compete in Big XII. I think he can get it done. He showed progress last year and without his best player. Look for more success this year. He also has a 5 star on his squad, so he can recruit too

Yep. Look at the record. Figured even you could figure that out. Guess nit

LSU must be a cupcake team