On Friday afternoon inside the Kansas football locker room, David Beaty had the floor one final time.

Fired 19 days earlier, the outgoing head coach had plenty to tell his players after their final game together, a home loss to Texas. But Beaty also asked every assistant on his staff to speak, too. And while the messages from the head coach and his staffers included words of gratitude and love, they also urged the Jayhawks who have a chance to play for the next coaching staff to consider what could still be accomplished at KU.

“There wasn’t a single man who didn’t talk about how they can honor these seniors by staying together and really building on this,” Beaty said.

In those moments, the KU football program wasn’t Les Miles’ quite yet. So the chief point Beaty delivered during his ultimate postgame speech meant a lot to the seniors who, like their coach, hoped to accomplish more before their time in Lawrence was done.

Senior quarterback Peyton Bender shared his version of the scene, and it came across as one in which Beaty and his staff encouraged the team’s juniors, sophomores and freshmen to stay put instead of transferring. 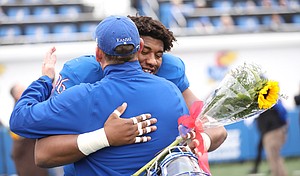 “Don’t go looking for other places — the grass isn’t always greener on the other side,” Bender related of the conversation’s gist. “You know, honor these people that have been here by sticking together and getting this thing turned around.”

While that advice wasn’t for the seniors, Bender said they appreciated it and the delivery showed what type of person Beaty is.

“At the end of the day he cares about the players and he wants the best for his players,” the QB said. “I think he just wants to see us succeed as young men. All the struggles that this program’s been through — you look at guys like Joe Dineen and Steven (Sims) that have been here for four years and just all the ups and downs. These kids deserve to have something positive. And sticking together, you know, we’ve got the talent down there to do it. You saw that. This year I thought we were a lot more competitive. We were right there close in a lot of games and I think if they just stick together they’ve got the guys to get it done.”

The senior leaders who are leaving the program behind are on board with Beaty’s departing message.

Asked what his advice would be for the program’s prominent non-seniors, such as junior safety Mike Lee, linebacker Dineen said he will implore them to lead.

“It’s your team. Guys like him, Bryce (Torneden), even guys like Pooka (Williams, KU’s star freshman running back), it’s their team now. And they’ve got to take it over in the locker room,” said Dineen, a team captain.

The fifth-year senior from Lawrence also echoed his head coach’s suggestion that the returning players for 2019 stick together.

“Throughout my career here there’s been a lot of changes just in general, and the one thing you can control is your commitment level to the team and how hard you work. You can choose to waver or you can stay strong,” Dineen said. “My advice would just be stay strong and stay committed.”

Redshirt senior defensive tackle Daniel Wise, also a team captain, said he and other team leaders already had started having conversations with Lee and key members of the team who have eligibility remaining.

Wise hopes that the most important non-seniors on the roster, in one sense, follow the path he and Dineen took.

“That’s kind of what we’ve been doing, how me and Joe have been sticking it through, through and through,” Wise said. “Things from the outside looking in may not look appealing, may not look good. People may be saying things, hearing things here and there like people are leaving. But the guys in that locker room, that brotherhood has to stick together in order to get this thing turned around. I think we’ve got a chance next year and in years to come.”

At the conclusion of his four-year stay, that included a 6-42 overall record and 2-34 mark in the Big 12, Beaty wasn’t interested in publicly discussing what his successor, former LSU and Oklahoma State head coach Miles, was about to take on at Kansas.

However, on his last day as head coach, Beaty preached to his Jayhawks in private how important it will be for them to stay at KU and play for the man hired to replace him.

“I just think he really loves this university,” Dineen said of Beaty. “Some of you guys that cover it probably know that when he first came in it wasn’t in a good spot. It didn’t show in the win column, but he turned this thing around. He’s handing it over in pretty good graces to Coach Miles. I just hope we can get some wins around here. It’ll be a little bit weird being a fan now, but I’m a Jayhawk for life.”

Wins were scarce, but life lessons did abound. Don't take the easy path.

I guess I don't understand why players would leave in mass exodus with Les Miles incoming. I mean, you've stuck it out through the tough times with little to show for it. Then real hope for something better finally comes walking in the door and some think it necessary to caution non-seniors to shun "greener grass" elsewhere? If I were a non-senior I'd be excited as all get out to come back and play for a national championship winning coach.

Can someone explain all the exhortations to me ('cause I ain't gettin' it)?

New coach means new system and some players may not be a good fit for that new system. At least as far as on field issues go. Some players may just end up not being good enough in Miles eyes and tells them to look elsewhere.

I understand if Miles thinks they're not good enough and he "encourages" them to leave by talking about reduced playing time, etc. But that is not the case being addressed in this article. Here, they're talking about players choosing to stay and not transfer out in the face of the new regime. This is clearly indicated from phrases like "the grass looking greener" elsewhere (which is of concern to players, not to coaches), words like "sticking it out" (which is a player choice/attitude), etc. Bender even stated, "Don't go LOOKING for other places."

None of this adds up in my mind.

Like has been brought up else where. - -K-State gonna be in a bad spot too - -same boat as it's being reported that Snyder going to resign within the next 48 hours.

Lots of talk might be able to get some of those in state recruits to flip to us with Snyder hanging it up. - -K-State going to have recruits flip because they came to play for Snyder - -we shall see

The main one they need to really work their butts iff to keep is Pooka. The kid is a beast. - -I think if he keeps Tony , then BOTH he and Tony need to have a sit down with Pooka , he is the foundation. - - - can't let him slip away. - -Daddy saying he is an SEC running back. - -Not sure but umm isn't Pooka old enough to make up his own mind. I think with him coming right out and saying it I think Coach Beaty was actually addressing Pooka as much as anyone encouraging him to stay. - - Pooka CAN turn this team around- he should be their 1st priority.

Agree totally. Pooka turned the entire game around with Texas. For 3.5 quarters Beatty’s offense did nothing and was 3 and out most of the time.

This was my first thought once the coaching change was made. Hopefully he isn't lured away by more successful schools because I think he could be the face of this team and be one of the key pieces for us to turn it around.

The message could have been, "Hey, you have a solid chance at winning under someone who has actually heard coaching experience, and has won a national championship. He has coached at a level I still can't wrap my mind around. Your assistant coaches will probably take a step up as well. This is a place that actually has expectations now. If that's too much for you, follow me, if not, stay and see what organized football looks like."

I hope these guys stick together and return en masse, ready to compete. It's exciting to think about the progress some of these guys will make under new leadership. If there's a silver lining, a lot of guys gained tons of valuable in game experience. Maybe the next regime will be able to do a better job of leading these guys to victory via better play calling, consistency, preparedness, and (cough) better use of timeouts.

That should be the last article about Beaty and his post game speech...if I were a player with eligibility left I would be jacked...and Miles won't ask anyone to leave with the scholarship mess Beaty leaves.

It seems to be lost on some people that these KIDS are learning life lessons. Most are not used to being away from home. Beaty and staff ARE family. Most of his staff will be let go. Family over everything.....sound familiar. Many of those KIDS love that man. He was great at loving them and the University, just not P5 coach. Some may want to look for that. For these KIDS, which 99% of them will NOT go to the NFL, but to a real job, then growing up to be a man and education is more important than wins and losses(which is all the fan base seems to care about). Not saying Les isn’t family oriented and won’t be just as good as a father figure, but these are kids that are swayed by what they read and are told

There are five P5 teams looking for a coach with more to come. Glad we beat the Christmas rush.

I believe Coach Beaty has the best interests for "his" kids, and the school, at heart. That said, I also believe he knows that at least the first two seasons under Les Miles, his legacy will be helped if they succeed. It won't be Les Miles' team until his first and subsequent recruiting classes are the only players on the team. If there is a mass exodus of players, it would leave the cupboard even more bare than when Charlie Weis was fired, and the KU fan base would have to suffer through a couple more rebuilding seasons.

It is possible, and maybe even likely, with returning starters and a decent recruiting class by Miles and staff, that Kansas could win six games next year. They probably would have done it under Beaty if not for the cloud over his job this season, casting a pall on recruitment.

Players commonly attend a university because of the relationship developed with a coach. If the relationship ends because the coach leaves then the reason for being there is gone. There are other successful programs and coaches that they already know/have relationships with that would be willing to accept them. They aren't fans and alumni that only relate with the program through the standings in the paper.

I want to thank Coach Beaty for the class he's shown in this transition, and his loyalty to KU. Some coaches leave and try to recruit players away (Calipari). Others leave and express their sour grapes. Beaty has been consistent in communicating his love for KU and the athletes on the team. He's a good man.