New York — Their pick-and-roll might not have been as vicious at 3 feet tall as it is today at 6-foot-9 and 6-foot-7. But Dedric and K.J. Lawson sure are glad to be back out on the court together making plays for their team.

“That’s been our game our whole life,” Dedric said after he and his brother combined for 32 points and 19 rebounds in KU’s 87-81, overtime win over Tennessee on Friday night at Barclays Center. “We’ve been playing together since age 3 and 5, just going out there competing. He has my back, I have his back and we look after each other.” 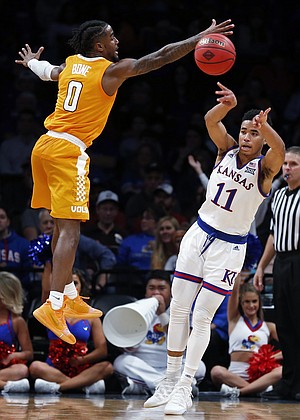 The Memphis transfers who joined the Jayhawks 19 months ago and sat out the 2017-18 season, played major minutes together for the first time as Jayhawks in the hard-fought win over the No. 5-ranked team in the nation.

And while it was Dedric whose 24 points and 13 rebounds lit up the stat sheet and earned him NIT Season Tip-Off MVP honors, K.J.’s contributions (eight points, six rebounds, two steals in 19 minutes) were just as important to KU coming out on top. In fact, it was K.J.’s style and service that may actually have been more fitting for Friday night’s tone.

“It’s just a toughness game,” K.J. said after KU’s come-from-behind victory. “I just like games like these, where you just go against guys that’s going to compete and not going to back down. It’s not a pretty game, everybody’s not shooting 3s, everybody’s trying to force it down your throat.”

Dedric, the preseason All-American and Big 12 player of the year pick who has found his way into a bright spotlight since arriving at Kansas, played 41 minutes against the Volunteers and recorded the 39th double-double of his college career.

He topped 20 points for the third time in five games with Kansas and eclipsed the mark for the 17th time in 70 career games.

But none of those numbers mattered to the younger Lawson brother, who said, yet again, that all he was worried about Friday night was helping Kansas pick up a victory. The added bonus of seeing his brother play a big role alongside him was at least a little bit sentimental.

“It’s a great feeling being back out there playing in a tough game with K.J.,” Dedric said. “That’s something that you dream of growing up, playing with your brother in a tough environment and it was a great experience being here.”

With Udoka Azubuike struggling through foul trouble and reserve forwards Mitch Lightfoot and David McCormack playing limited minutes because of the makeup of Tennessee’s lineup, it was the Lawson brothers who were asked to scrap and battle the big, bruising Tennessee bodies.

And on the big stage, in a game that Self said just two days earlier Kansas needed more than Tennessee, the two Tennessee natives delivered.

But don’t think for a second that the Lawsons drew added motivation from facing the flagship school from their home state.

“We really don’t go on that side of town,” said K.J. of Knoxville, Tenn. “That’s West Tennessee. We really (just stay) in the corner.”

Had K.J. done that on the Barclays Center floor on Friday, Kansas (5-0) might have lost. Instead, he stuck his nose in there, battled for everything he got and played more minutes in this one game (19) than he had in KU’s first four games combined (17).

“That’s how I like to play,” K.J. reiterated when asked why he found success. “I like to play physical. That’s what I look forward to, and I’m just glad I had the opportunity to show (what I can do).”

"Had K.J.Done that on the Barclays Center floor on Friday, Kansas (5-0) might have lost..."

Maybe I'm just missing something, but had he done what? Before you were talking about the geography of Tennessee.

Had he just "stayed in the corner". Obscure, I'll admit.

Someone needs to pull out a map of TN. Knoxville is in eastern TN and Memphis is west. The things they're not teaching these kids.

Yeah sorry they don't teach kids the geography of every state...how does that even effect day to day life? Hint, it doesn't! Especially if you live in Texas, like I do. I have been to Tennessee once in my life and I was 8, I'm 24 now. Regardless I admitted I was probably missing something.

Not the point. They don't need to know everything about every state but they should at least learn about their own state. Hint: the Lawson's are from Tennessee. Although it might be the grammar that is the problem. He was alluding to the fact that Memphis is West Tennessee and they don't venture away from their little corner of the state.

It was a clever pun/joke, I missed it. But seeing how I have no reason to go to Tennessee in the near or far future, I honestly don't see the need in pulling out a map of Tennessee.

never ever drive through memphis if you can help it. think salina trucker heaven times a million. you can't change lanes or see anything as you are constantly boxed in by semi's.

I didn't know KJ is a vegetarian. Haven't seen a vegetarian dunk yet.. He definitely needs to keep up with Dedric in terms of dunks. Bet on how many dunks per game each can get. They can make games more fun that way and benefit everyone.

The more I see the Lawson brothers in action, the more I like them. We are all fortunate that they decided to come and wear the crimson and blue for the rest of their college careers.

I believe KJ meant, "yeah, that's what we do in west Tennessee." There's a huge rivalry between Memphis and Knoxville, west and east Tennessee, low river delta and hill country, Memphis blues and country music. Kids from Memphis love to beat the snot out of the big, uppity kids from Knoxville. KJ, Dedrick and LaGerald were pumped up for the Tennessee game because they were getting a great shot at doing what is often a difficult challenge at the U. of Memphis.

I had been hoping that with both Lawson brothers coming to KU and finding success under HCBS, that it would trickle down to the other three brothers? Seems like Oregon had the upper hand in recruiting the next Lawson to D1 basketball. I am still hoping that HCBS works some recruiting magic on the youngest of the Lawson brothers? Glad to have K.J. and Dedric on board, going to need them for number 15 straight!

Chad from what I understand Chandler picked Oregon not that he didn't like Kansas …..But Coach Self wanted him to wait until the spring signing period to see what other players were available …….So maybe Self felt either he wasn't a good fit or that a more talented player might be out there who knows …..Chandler didn't want to wait …..If he was a talent like Zion Coach Self wouldn't have posed that question to Chandler. As far as K.J. he gave you 8 pts and 6 rebounds would Garrett have given the Jayhawks that …..Garrett is not efficient on the offensive end but he can give you a few rebounds .Now if Coach Self gives both Lawsons playing time then that may help the remaining Lawson make a decision ..If K.J. is disgruntled about lack of playing time that will also help his brother in his decision ….but that's a couple years away .

"As far as K.J. he gave you 8 pts and 6 rebounds would Garrett have given the Jayhawks that …" - nope, I don't think so. It comes with experience and skill to box out and rebound like KJ did. He's not a dribble drive penetrate guy, but playing taller guy in this game certainly had its advantage on both O & D.

Another observation is McCormick who Self would like to find minutes for.. seems to be a bit lost .Watching him out on the court is like watching a person trying to drive a car with a standard transmission for the first time…….kind of herky jerky not smooth when shifting gears.that is how McCormick seems on the court. Now to his credit he lost over 50 pounds but he still is growing into his body …..but he will figure it out and be just just fine

It's McCorm"a"ck. David McCormack was an out of control freight train on KU's very first possession after he entered the game. He ran headlong into a Tennessee player that he apparently couldn't see taking position twenty feet in front of him.

It was truly a physical game which the refs tried to control and barely managed to. An earlier phantom foul call on Udoka led to the later unquestionable foul which put him on the bench permanently.

KU was fortunate Williams fouled out when he did, otherwise they certainly weren't making any attempt to keep him from receiving the ball in the corner ten feet from the basket. Three times in a row he caught the ball, took one dribble and blew by Dedric for an easy layup. It didn't't make sense that Tennessee was able to get Williams the ball in the same spot in position for an easy basket three possessions in a row. (He may have missed the third basket, but not from being guarded well.)

it's "didn't" not "didn't't" See anybody can be the spelling police.

Rick Barnes must hate Coach Self.